Towards carbon neutral ops: E195-E2 Aircraft from Embraer to use 100% on GTF-powered engines

The two days ground tests were carried out with one engine running on 100 percent SAF at Fort Lauderdale International Airport. And it concluded in a 70-minute flight test at Vero Beach Regional Airport in Florida. 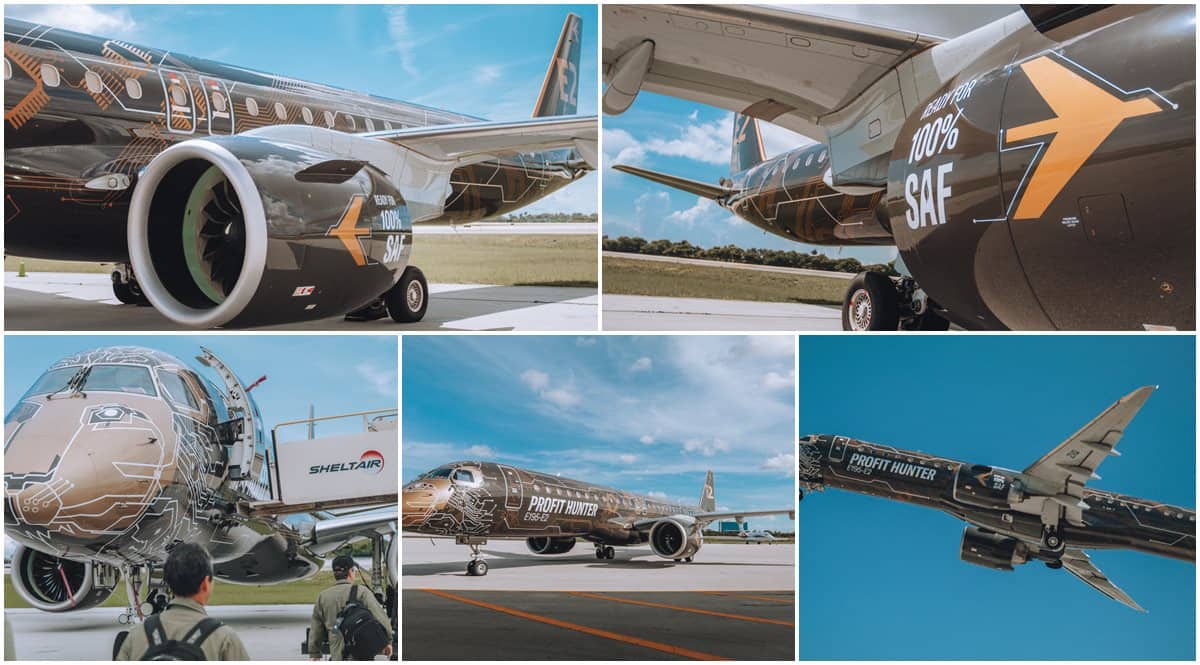 The test has also proven that the GTF engines from the hose of Pratt & Whitney can run on any fuel.

Brazil based aerospace giant Embraer together with US based Pratt & Whitney have together successfully tested a GTF-powered E195-E2 aircraft on 100 percent Sustainable Aviation Fuel (SAF). Embraer E195-E2 powered by GTF engines will be the most environmentally friendly aircraft. The test has also proven that the GTF engines from the hose of Pratt & Whitney can run on any fuel.

The two days ground tests were carried out with one engine running on 100 percent SAF at Fort Lauderdale International Airport. And it concluded in a 70-minute flight test at Vero Beach Regional Airport in Florida.

What did the tests validate?

According to an official statement from Embraer, these tests have validated the company’s efforts that E-Jets E2 family and GTF engines can fly on both engines with blends of up to 100 percent SAF. And there will be no compromise to safety or performance of the aircraft.

At the end of the successful test in the US, Rodrigo Silva e Souza, vice president strategy and sustainability at Embraer Commercial Aviation said: “The test demonstrates that the E2 is ready for 100 percent SAF certification and operation once the industry finalizes standards.”

Financial Express Online reported last month that the Brazilian aerospace giant is already present in the Indian market and is also in talks with some partners for the E-Jets E2 family.

Both Embraer and Pratt & Whitney are leading the industry with products that are more efficient for their customers and more sustainable for society.

According to company officials the E2 is already the most efficient single-aisle aircraft flying today. And it is saving up to 25 percent carbon emissions when compared to previous generation aircraft.

Rodrigo Silva e Souza said that the reduction in the emissions can be increased to 85 percent with 100 percent SAF.

And to achieve a significant reduction in emissions the older aircraft need to be replaced by new-generation products and scaling up SAF production.

Sharing her view with Financial Express Online on GTF & SAF, Ashmita Sethi, President and Country Head, Pratt & Whitney India, said: “The GTF has already delivered on its promise of sustainability and fuel-efficiency to airlines in India, delivering nearly 1 billion dollars in fuel savings over the years.”

Adding, “With constant technological evolution, achievement of 100% SAF milestones like this one, and innovative fleet strategies being introduced by Indian airlines, I am confident that the GTF will lead the way to greener skies for India.”

Embraer aircraft and Pratt & Whitney engines are both certified to operate with SAF blended up to 50 percent with standard Jet A/A1 kerosene, according to ASTM International specifications.

The future the specifications will enable blends of up to 100 percent SAF which will help to maximize the emissions reduction potential of using fuel derived from sustainable, non-fossil-based feed stocks.

Said Graham Webb, chief sustainability officer at Pratt & Whitney, “SAF is a core part of our sustainability road map.  We continue to work with industry partners and regulators to support the development of a drop-in standard for 100 percent SAF.”

More about SAF used for test

According to both the companies it was 100 percent Hydro processed Esters and Fatty Acids Synthetic Paraffinic Kerosene (HEFA-SPK) acquired from World Energy.

It is a specific type of hydro treated renewable feedstock fuel. It is used in the aviation industry. Due to the sustainability of its feedstock this fuel is considered a leading alternative replacement for conventional jet fuel by the Commercial Aviation Alternative Fuels Initiative (CAAFI).