Security and Defence cooperation deepening between India and Gulf nations

India has prioritised improving the relations with the Gulf nations especially the Kingdom of Saudi Arabia and UAE and defence cooperation evolved as one of the important areas for furthering bilateral engagements. The threat from Jihadi-terrorist groups such as ISIS and Al-Qaeda groups on their spread of their ideologies into Indian sub-continent was a matter of serious concern to both internal and external security scenario of India. 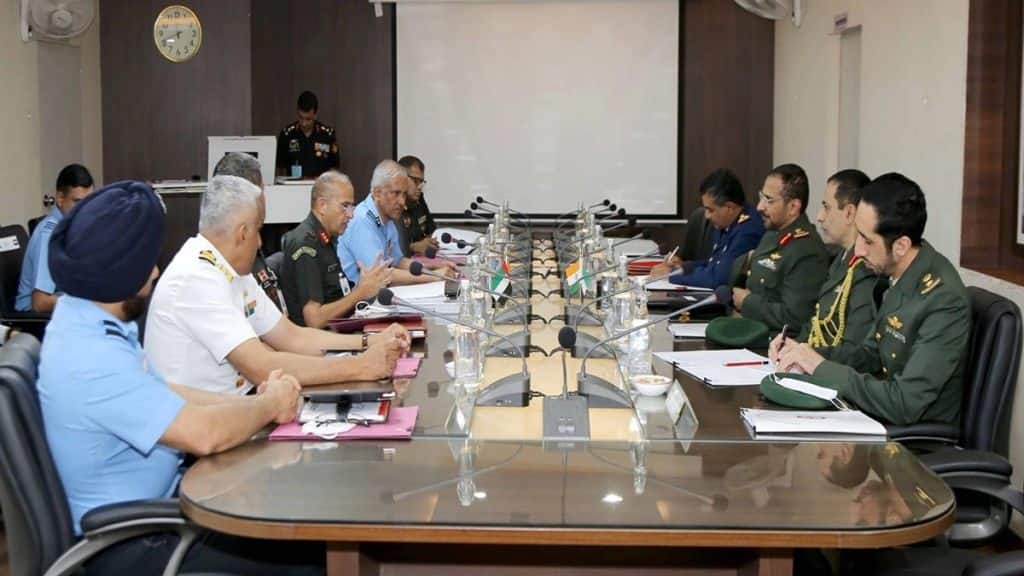 The evolving change in dynamics of geo-politics, especially in the regional security order is resulting in the growing levels of regional and bilateral engagements between India and Gulf nations. At the bilateral level, defence cooperation began during the last decade and the initial focus was on maritime security, fighting piracy in the Western Indian Ocean, ensuring coastal security, tackling money laundering and organised crime.

However, since 2014, India has prioritised improving the relations with the Gulf nations especially the Kingdom of Saudi Arabia and UAE and defence cooperation evolved as one of the important areas for furthering bilateral engagements. The threat from Jihadi-terrorist groups such as ISIS and Al-Qaeda groups on their spread of their ideologies into Indian sub-continent was a matter of serious concern to both internal and external security scenario of India.

Also Read
Indian Army: What it means to change the traditions and customs
IAF and Army Day events move out of Delhi NCR for first time ever
Catch-22 for HAL Tejas in Argentina
PM Modi was right when he said this is not time for war: French President Emmanuel Macron at UNGA

India is dependent on the six Gulf Cooperation Council (GCC) nations for 42 percent of its overall oil imports; three of the top five oil suppliers to India are Gulf states, with Saudi Arabia the largest, providing 20 per cent of India’s total oil imports. India gets the major share of Liquefied Natural Gas from Qatar. With the global turmoil in the energy sector due to the Russia – Ukraine conflict, India should be cautious on its energy imports from the Gulf. Any disruption in this energy supply could lead to slowing of India’s fast growing economy.

Geopolitical shifts and the growing possibilities of friction between polarised global powers over China’s expansionist aspirations in the Indo-Pacific necessitates enhanced military cooperation between India and Gulf nations. Lately, the regional stability and security scenario in the Persian Gulf and West Asia has been under strain due to the brewing tensions between US and Iran and it is very critical for world’s fastest growing nation in terms of economic measures, to maintain peace and stability in the region through deeper defence and security engagements with GCC countries.

The first MoU on defence co-operation between India & Saudi Arabia was signed in 2014. The steps from both nations started gaining adequate momentum post  Indian Prime Minister Narendra Modi’s visit to Riyadh in April 2016. A bolstered step to further the ties between the two nations was taken by the reciprocatory visit  of Saudi Crown Prince and Defence Minister,H.H Mohammed bin Salman in 2019.

Under the MoU, a Joint Committee on Defence Cooperation (JCDC) was set up to enhance the military-to-military engagements between the two countries. India offered to conduct military training for the officers of Royal Saudi Armed Forces at Indian defence training institutes. Future areas of Bi-Lateral defence cooperation between India and Saudi Arabia will be undertaken under the aegis of JCDC.

Indian Navy’s Chief Admiral Sunil Lanba visited the Kingdom of Saudi Arabia (KSA) in 2018. The recent historic visit of the Indian Army Chief General Manoj Mukund Naravane in Dec 2021 was reciprocated by the Commander of the Royal Saudi Land Forces, Lieutenant General Fahd Bin Abdullah Mohammed Al-Mutair, in Feb 2022. The momentous occasion of the first ever visit by a Chief of Royal Saudi Land Forces to India indicates the due importance given towards bilateral defence cooperation between the two nations by KSA.

In Feb 2019, both the nations “agreed to cooperate and collaborate in joint defence production of spare parts for Naval and Land systems as well as supply chain development.”

The shift in focus from a Euro-Atlantic to an Indo-Pacific  and the repositioning of global economic and military power towards Asia has resulted in significant political, economic and social changes in the Indian Ocean Region and impacted India’s maritime environment in tangible ways. Both nations seem to be progressing the mandate of military cooperation with the objective of regional maritime security in the Indian Ocean and Arabian Sea. Regular Goodwill visits and Port Calls at various Saudi ports are embarked upon by the Indian navy and coast guard.

The 11th India-UAE Joint Defence Cooperation Committee (JDCC) meeting will be held in New Delhi in May 2022. JDCC is the apex body that plans, promotes and reviews the military cooperation and engagements including joint planning and exercises between India and UAE. Bilateral Defence interaction between India and UAE has been steadily progressing over the years. There have been regular high level exchanges at the level of Service Chiefsbetween the countries. The ships of both the Navies jointly undertake variousExercises such as Gulf Star 1, PASSEX, IDEX/NAVDEX regularly. In the recent past there has been serious impetus from UAE into the Indian A&D sector. Delegations led by Ministers and Senior military leaders have been attending Indian DefExpo and Aero India every alternate year. Recently, UAE military and Indian Ordnance factory have signed an agreement for supply of ammunition.

Sultan Qaboos bin Said al Said, the late ruler of Oman was the longest-reigning leader of the modern Arab world. The late sultan and his father have had strong relations and affiliations with India from their very young and formidable student years. As a student, Sultan Qaboos was taught by Late Shankar Dayal Sharma, who went on to become the Hon President of India and Sultan Qaboos’s father, himself an alumnus of Ajmer’s Mayo College.

Defence cooperation between Oman and India goes back by decades. India-Oman joint naval exercises are a calendar event since 2017. Oman has been an all-time ally and trade partner of India for many decades. This good old relationship between the two nations moved to the next level when India was accorded complete access to the Port of Duqm by Oman. This strategic achievement for India enhances the overall reach of and deployment capabilities of the Indian military in IOR. This is part of India’s maritime strategy to counter Chinese influence and activities in the region.

The Port of Duqm is situated on the south-eastern coast of Oman, overlooking the Arabian Sea and the Indian Ocean. It is strategically located, near the Chabahar port in Iran.Indian Submarines, frontline warships and long range maritime reconnaissance aircrafts – P8i have access to this port for military and logistics use. The Indian naval units were on a month-long deployment with the aim of enhancing surveillance and cooperation between the two nations and their forces.

With the focus on counter terrorism, regional security and peace-keeping operations, Indian and the Royal Army of Oman recently conducted their 13-day joint military exercise ‘AL NAJAH’ in August, 2022 at Rajasthan, India.

In May 2016, a tripartite agreement was reached between India, Iran and Afghanistan to develop the Iranian port of Chabahar, with India providing $500 million towards its development. Located in the Sistan-Balochistan province on the energy-rich Iran’s southern coast, the Chabahar port is being developed by India, Iran and Afghanistan to boost connectivity and trade. Once completed, this would enableIndia to offset Pakistan’s denial of overland access to Afghanistan and to compete with Gwadar port in Pakistan, which is being developed with Chinese support as part of the China-Pakistan Economic Corridor.

Various big trading regions of Afghanistan were connected with Iran’s Zabul and Nimruz provinces by the roadways designed and constructed by the government of India at the request of Afghanistan.This infrastructure development has resulted in shorter, smoother and more efficient means of transportation of Afghani goods.

Chabahar road is much shorter and more stable than any of the routes in Pakistan, making it perhaps the most efficient port for exports, where 80 percent of Afghanistan’s cargo traffic now lies. India has always worked towards regional growth and stability both in terms of economy and security. Together through the development of Chabahar port, India and Iran have given a shot in the arm for overall exponential growth of trade and economy for Afghanistan.

As India grows in stature, it will need to fully utilise defence diplomacy to enhance its national interests. To be an effective instrument of the national strategy, the military instrument cannot operate in isolation but only as part of a fully coordinated and coherent overarching national strategy. The changing dynamics of net security in the region and the realisation of India’s strong military stature that can provide counterbalance.

However, India has the ability to walk the tightrope in maintaining a fine balance on its relations with Iran, which could come in the way of enhancing its ties with the GCC. India needs the Chabahar port for its trade with Central Asia. If it moves too close to GCC nations as also provides them with military hardware, it could impact its relations with Iran.For a while Turkey has been asserting its power and trying to challenge the Saudi hold over the OIC.Turkey, Pakistan and Malaysia grouping is threatening Arab control over the OIC.

In the security and strategic space, there could be a shift away from the GCC’s reliance on the decade-old U.S.-centric protection net. The more inclusive Indo-US relations and the upgrade of India’s status to “Strategic Partner” by the US has truly boosted India’s stature. Since this aligns with the security constraints of the region and if the U.S. commitment in the region will shrink in the decades ahead, it opens interesting and diversifying possibilities for India in the region’s security arena.

The failure of the United States to limit the chaos in Iraq, the nuclear deal with Iran, which compromised the GCC countries’ perceived security concerns and the inaction in Syria has heightened the region’s fatigue with the United States.This could also be the opportunity for India to cement its relations with Gulf nations as a preferred Security Partner in the region.

After Space, India is turning into one of the global leaders in Missile Technologies in all the three-dimensions of warfare. With the focus on achieving export order value of Rs 35000 Crores by 2025, Indian MoD and entities such as BrahMos, BDL and DRDO should showcase its capabilities and engage towards opportunities for the sale of various missile platforms to the Gulf nations in addition to the other friendly foreign nations.The first of its kind Brahmos supersonic missile export deal with Philippines will certainly open up many new opportunities of similar foreign military sale from India. India is also in talks with some Middle Eastern countries such as the UAE and Saudi Arabia for exporting the Akash air defence missiles.

As the region is going through rapid political changes, it becomes imperative for India to engage with these countries looking beyond just only the economic relationship. Oil and trade have sustained historic ties between India and the Gulf. However, in order to achieve and protect India’s national and strategic interests in the region, there must be deeper levels of engagements with the Gulf nations especially in terms of Military Diplomacy, even if it means only bilateral ties. With several factors contributing to the ‘rediscovery’ of the India-Gulf relationship, it is time to convert the ‘opportunity’ into a ‘strategy’ and ‘strategy’ into ‘action’.

The author is an Indian Navy veteran (Commander).