India and France already have a high level dialogue on maritime security, and this enables the two to raise strategic issues in the Indo-Pacific. 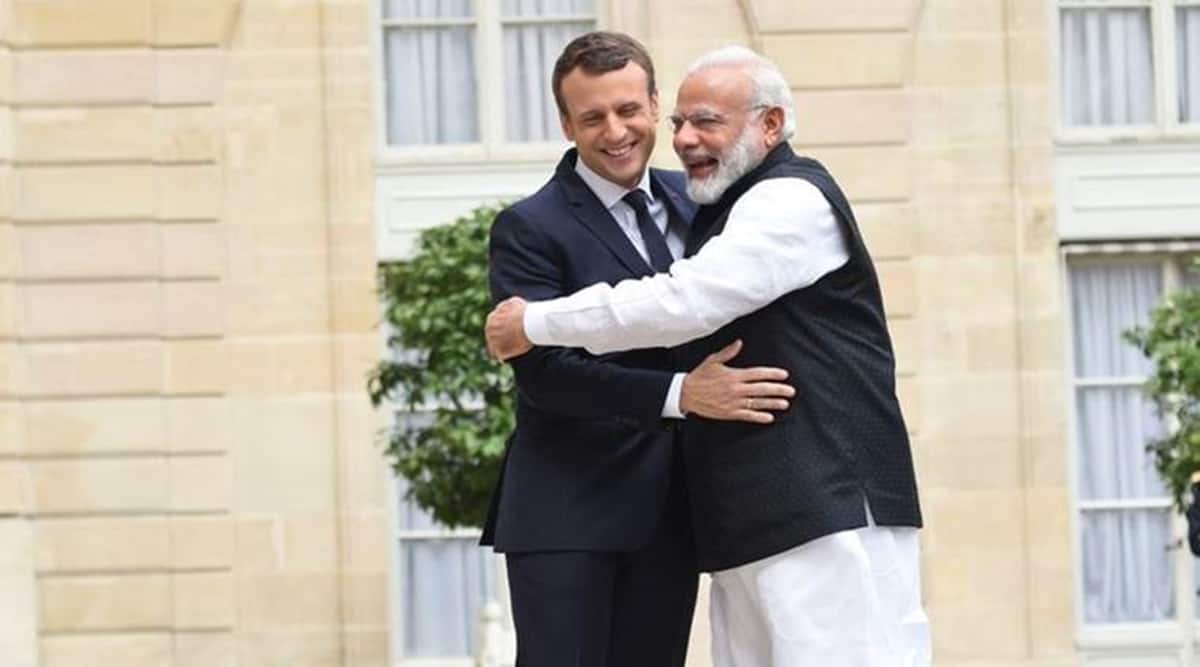 PM Modi will be the first few foreign leaders to meet President Macron since he recently got re-elected. (IE)

Maritime security and Defence industrial cooperation, blue economy, international law of the sea as well as related multilateral negotiations will be the focus of talks when leaders of India and France meet later this week. Prime Minister Narendra Modi, on his return to India from Denmark, will be visiting France and will have bilateral talks with the French President Emmanuel Macron. PM Modi’s visit comes at a time when the Russia-Ukraine war continues and Europe is facing unprecedented security challenges.

Briefing the media persons ahead of the visit, India’s new Foreign Secretary Vinay Mohan Kwatra had said that defence and trade will be of major focus of PM Modi’s visit especially to Denmark and France.

Also Read
China’s offer of meeting halfway an opportunity or a trap?
Agniveer: An army veteran’s detailed argument against Agnipath scheme – Part 1
India’s outreach to LAC region; Space, security, gold, trade and more on agenda of talks
India at the G7 Summit: A touch of Himalayas in the Bavarian Alps

PM Modi will be the first few foreign leaders to meet President Macron since he recently got re-elected.

Discussions with leaders in Germany and France are important elements of the visit as they are “process based”, the foreign secretary had said in response to a media query during Sunday briefing.

Self Reliance in Defence

Since India is now focusing on creating a very strong eco-system in defence and aerospace, the focus of these European countries during the visit will be co-development, co-manufacturing and co-production of different military platforms including submarines for the Indian Navy.

Both countries are keen on deepening cooperation at the bilateral level especially at operational and strategic level; blue economy, marine spatial planning

Both sides have recently in February 2022, signed a roadmap which aims to build a common vision of ocean governance which will be based on the rule of law. And to also cooperate on sustainable and resilient coastal and waterways infrastructure.

India and France already have a high level dialogue on maritime security, and this enables the two to raise strategic issues in the Indo-Pacific.

During the visit to France, the emphasis of the talks between the two leaders will be on industrial cooperation especially in the defence sector, and possible joint projects in the maritime and aerospace domain.

Several companies from France are already present in the defence sector in India—especially Naval Group (former DCNS) which is building submarines for the Indian Navy under Project 75 along with Mumbai based MDL. The French company is also in competition for building more submarines under Project 75 (I).

Another major collaboration with the French engine maker Safran is with the Defence Research and Development Organisation (DRDO) is for jointly developing a 125kn engine which will power India’s indigenous fifth generation advanced medium combat aircraft (AMCA).

According to sources, the two countries have already identified areas where the defence industries from both sides can collaborate whether it is for the development of Unmanned Aerial Vehicles, underwater systems, and also MRO (maintenance, repair and overhaul) sector.

Financial Express Online has reported earlier that France has already offered jets for India’s second aircraft carrier and more Rafale fighter jets to the Indian Air Force (IAF) if there is a need. And the French side is already making efforts to integrate Indian manufacturers into the global supply chains which will help in India’s Make in India initiative too.

The two countries hold similar views as far as freedom of navigation and maritime law are concerned. These lanes are used for most of the goods, and they must remain free.

As the race is hotting up for a new aircraft-based fighter jet for the Indian Navy, last week French media outlet La Tribune has reported that for several months, the government of France has been studying the idea of selling four used ‘Rafale Marine’ fighter aircraft to the Indian Navy. This is the carrier-borne variant of the Rafale fighter, which is already part of the Indian Air Force Fleet.

The La Tribune has mentioned in its report that the sale of the four used Rafale Marine to the F3-R standard is expected to give a competitive advantage to France against the Americans, in the context of the Indian call for tenders to equip the INS Vikrant.”

“These four Rafale Marine have been recently modernized and could indeed be quickly put into service on the Indian aircraft carrier,” La Tribune has said.

US manufacturer Boeing recently announced that it would be deploying two F/A-18 E/F Super Hornet fighters to an Indian Navy test facility in Goa for flight trials next month.

According to sources, “if the Rafale Marine and Super Hornet are in race, chances are that the French company might make the cut as the IAF is very satisfied with the Rafale which are part of its fleet.”

The Indian Navy is looking for 57 jets which are expected to operate off the aircraft carrier “Vikrant”, which is undergoing trials and later this year is expected to be commissioned in the Navy.