Speaking at a webinar organised by the Delhi-based United Services Institution on 3rd August, Chief of Army Staff General MM Naravane lashed out at the existing procurement procedures. 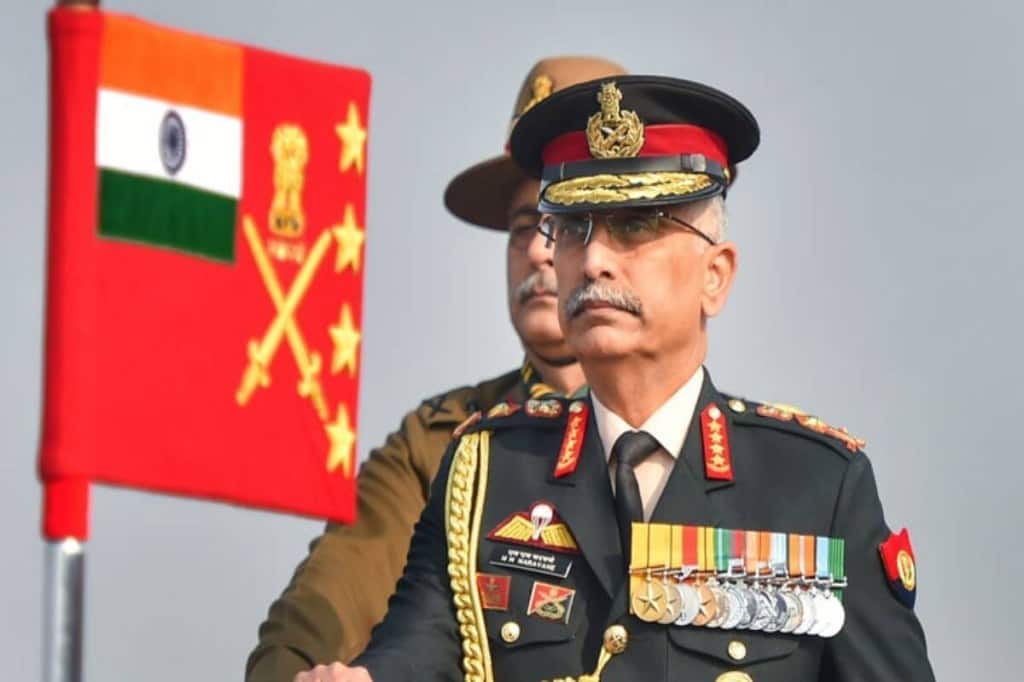 General Naravane called for a ‘revolution in bureaucratic affairs’ to ensure that the soldiers get the required equipment on time.

Speaking at a webinar organised by the Delhi-based United Services Institution on 3rd August, Chief of Army Staff General MM Naravane lashed out at the existing procurement procedures. Justifiably critical of the tardy decision making -attributing it to the overbearing nature of the rules and regulations leading to a ‘zero error syndrome’- General Naravane called for a ‘revolution in bureaucratic affairs’ to ensure that the soldiers get the required equipment on time.

‘The need of the hour is to have a metamorphosis’, he said. ‘Perhaps the time had come to do away with the concept of L1 vendor altogether’, he added helpfully. The L1 system requires procurement to be made from the lowest bidder.

Also Read
US offers critical technologies to India under iCET
New logo of G20 unveiled for 2023 – Know all about the Symbol of Hope
Exclusive: Boost for Haryana, road shows next month to showcase Integrated Aviation Hub
Russia completes the assembly of reactor vessel for Kudankulam nuclear power plant

Most of what the General said is unexceptionable but coming from the chief of an organisation which has always been fully involved in shaping the defence procurement procedures over the years, the opprobrium was somewhat surprising.

The Defence Acquisition Procedure 2020 (DAP 2020), which currently governs defence acquisitions, was promulgated in October last year after more than a year of deliberations. Several committees instituted by the Ministry of Defence (MoD) interacted with the industry, think tanks and all other stakeholders. A draft document was also released inviting suggestions from the public.

Releasing the document, Defence Minister Rajnath Singh had said that many conceptual, structural and procedural reforms had been introduced to ensure that ‘contemporary technology based equipment’ is made available to the services in a time bound manner. What the Army chief said negates these claims.

The DAP-2020 was approved by the Defence Acquisition Council (DAC), which is headed by the defence minister and has all the secretaries in the MoD, service chiefs, Chief of Defence Staff, and other high officials as members. There is no indication that any of the issues highlighted by the Army chief in the webinar were raised in the DAC.

Surely, the problems highlighted by General Naravane have not surfaced only after promulgation of the DAP 2020. Besides, it is not known if any significant suggestions which could have addressed those problems were ignored or rejected by the drafting committee or the DAC. The media reports also do not indicate if the Army chief elaborated on the ideas set forth in his address. Consequently, it remains unexplained what is it that could have been done to make the system better but was not.

Be that as it may, while the angst underlying General Naravane’s critique is understandable, it is difficult to translate it into action.

Take for example his sardonic comment about the ‘zero error syndrome’. He would be right if what he meant was that the officials are very cautious in preventing any policy or procedural errors, but if what he means is that such caution is needless and that they should knowingly overlook manifest errors, it would be questionable. Nobody -not even the military bureaucracy- would want to, or should, take liberties while handling public money.

Probity demands that having evolved a bespoke procedure for defence procurement within the broad principles of public procurement laid down by the Ministry of Finance (MoF) in the General Financial Rules, 2017 the procedure should be followed. If the procedures are a hindrance, these can be changed by the MoD. And if any of the broad principles happen to come in the way, the matter should be taken up with the MoF along with a viable alternative proposition.

Meanwhile, it cannot be argued that the procedure laid down by the MoD itself in consultation with all the stakeholders, including the services, need not be adhered to in letter and spirit. If there is a mismatch between the letter and the spirit, it can be easily remedied by the MoD itself by amending the offending text in the DAP-2020 without any fuss.

Talking about the overbearing nature of the rules and regulations, the Army chief gave an interesting example. Why the proposal for procurement of skis should, he wondered, be discarded if they weigh 1.6 kgs just because the army had asked for skis that weighed anything between two to four kilograms. After all, he added, the lighter skis would be better for the troops. The explanation is rather simple.

If, after going through an elaborate process, the Indian army lays down the specifications which require the skis to weigh between two to four kilograms and this requirement is mentioned in the tender, skis weighing less than that cannot be accepted because it would be discriminatory. Some other vendors can turn around and say that they did not respond to the tender because their product weighed less than the weight specified in the tender, and they had no idea that products with lesser weight would also be acceptable. Inevitably, the issue would get entangled in allegations of wrongdoing.

This example also exposes the enduring problem with formulation of the specifications -services qualitative requirement, in the military jargon- which has been the bane of the acquisition process in the past. Returning to the example of skis, one wonders why the enquiries that are to be mandatorily made in the run up to formulation of the specifications would not reveal that products weighing less than two kilograms are also available and that these would serve the purpose better. At any rate, the DAP 2020 permits deviation from the prescribed procedure with DAC’s approval.

The Army chief also talked about the need to do away with the L1 concept. The general misconception about this concept is that it requires only the cheapest product available in the market to be procured regardless of whether it meets the requirement. This is not true.

The fact is that the services are free to prescribe the technical specifications of the equipment that meets their operational requirements and subject the equipment offered by the vendors to rigorous trials for eventual shortlisting of the vendors whose products fully meet their requirements with reference to the laid down specifications. The procedure only requires that from among the products which meet the specified requirement, the one that is the cheapest should be bought.

If this, or any other aspect of the existing procedure, is not working well, the remedy lies in working out the blueprint of a viable alternative. If, for example, the L1 system is to be junked, there must be absolute clarity about what kind of system it should be replaced with. No revolution -even if it is in the bureaucratic affairs- can bring about a better order unless the roadmap for post-revolution reconstruction is clear.

(The author is former Financial Advisor (Acquisition), Ministry of Defence. Views expressed are personal and do not reflect the official position or policy of Financial Express Online.)