The meeting between Doval and Jiechi will set the foundation for the next high-level talks that likely to happen in the coming months. Minister of External Affairs Sushma Swaraj and Defence Minister Nirmala Sitharaman are scheduled to visit Beijing on April 24th. 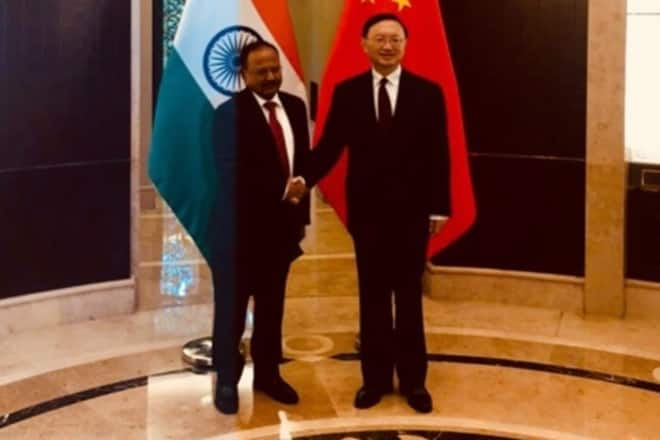 National Security Advisor Ajit Doval held talks with a top official of the Communist Party of China. He interacted with Yang Jiechi at the Indian embassy in Shanghai. The meeting between Doval and Yang Jiechi, who is the senior Politburo member, comes ahead of the important dialogue between the two countries. The two senior officials are meeting for the second time. The last time they met was during the 73 day standoff at Doklam.

A statement from the Indian Embassy at Beijing confirmed that Doval and Yang had held talks, but no other details about the meeting were disclosed. Ever since the standoff at Doklam, both India and China are trying to sort things out diplomatically. Apart from the issues of border, India has raised concerns over China-Pakistan Economic Corridor (CPEC), China’s dismissive behaviour to designate Masood Azhar, Chief of Jaish-e-Mohammed as a terrorist and China’s blocking of India’s entry into the Nuclear Suppliers Group and UNSC.

The meeting between Doval and Jiechi will set the foundation for the next high-level talks that likely to happen in the coming months. Minister of External Affairs Sushma Swaraj and Defence Minister Nirmala Sitharaman are scheduled to visit Beijing on April 24th. This meeting will lead to the meeting of Prime Minister Narendra Modi with President Xi Jinping on sidelines of Shanghai Cooperation Summit (SCO) 2018.

The SCO Summit 2018 will be hosted by China at Qingdao, eastern Shandong province in June. The Eurasian economic, political and security organisation was founded in 2001. India along with Pakistan, China, Kazakhstan, Kyrgyzstan, Russia, Tajikistan and Uzbekistan is a member state of SCO. There are four other observer states and six dialogue partners in SCO.

India and China will hold several meetings before the SCO summit. This meeting between Doval and Jiechi is one among first high-level talks to be held before the summit. The meetings that will follow will aim at focusing on issues related to terrorism, border dispute and other areas of bilateral convergence.

Yang who earlier held the post of State Councillor of CPC till last month had met NSA Ajit Doval during the Doklam stand-off. Yang had also taken an active part in the 20th round of boundary talks between India and China last December.