This month’s launches follow a series of weapons tests in 2021 that underscored how North Korea continues to expand its military capabilities during a self-imposed pandemic lockdown and deadlocked nuclear talks with the United States. 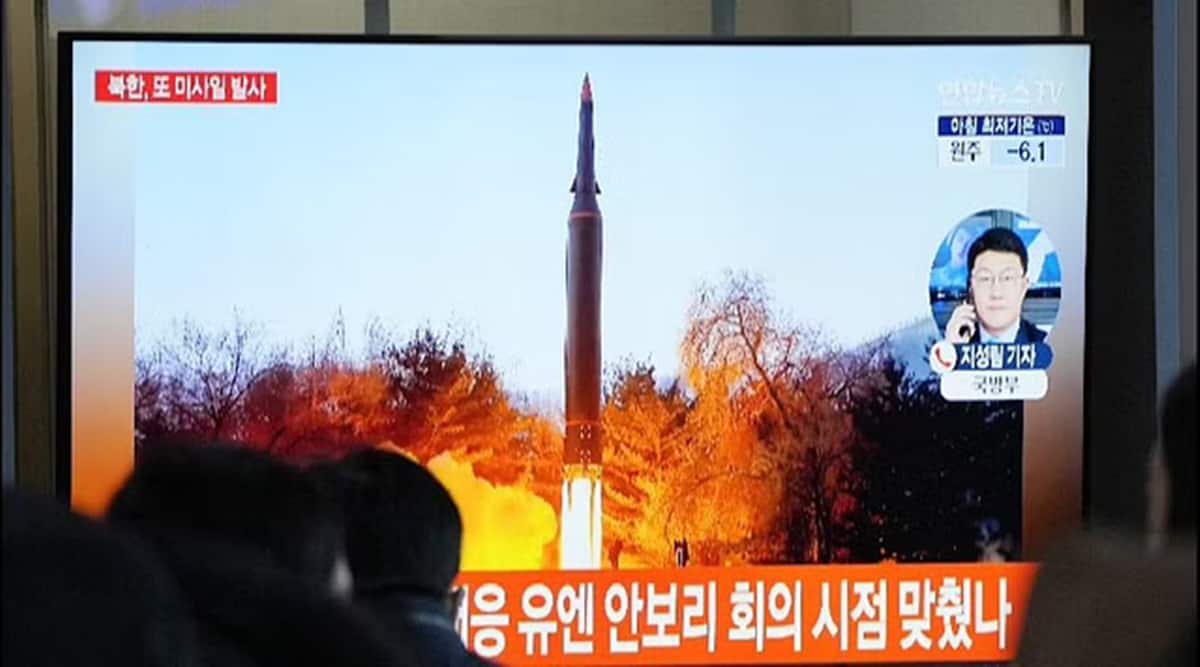 North Korea on Tuesday fired what appeared to be a ballistic missile into its eastern sea, its second weapons launch in a week, the militaries of South Korea and Japan said. This month’s launches follow a series of weapons tests in 2021 that underscored how North Korea continues to expand its military capabilities during a self-imposed pandemic lockdown and deadlocked nuclear talks with the United States.

South Korea’s Joint Chiefs of Staff said North Korea likely fired a single ballistic missile from an inland area to its eastern sea, and that the South Korean and US militaries were analysing the launch. It didn’t immediately say how far the weapon flew.Japan’s Prime Minister’s Office and Defence Ministry also said the weapon was possibly a ballistic missile, but officials didn’t immediately provide more details.

Prime Minister Fumio Kishida said officials were checking the safety of ships and aircraft around Japan, but there were no immediate reports of disruptions or damage.“It is extremely regrettable that North Korea has continued to fire” missiles so soon after the UN Security Council discussed its response to the North’s earlier launch, Kishida said.

The Offices of Guam Homeland Security and Civil Defense said they were monitoring the reports of the launch but that no immediate threat was assessed for Guam, a major US military hub in the Pacific.The launch came six days after North Korea fired a ballistic missile into the sea in what it later described as a successful test of a hypersonic missile, a type of weaponry it claimed to have first tested in September. Kim Dong-yub, a professor at the University of North Korean Studies in Seoul, said North Korea may have tested its purported hypersonic missile again in response to the South Korean military playing down last week’s test.

Seoul’s Defence Ministry said after that test that North Korea had exaggerated its capabilities and had tested a conventional ballistic missile the South was capable of intercepting. The ministry said it doubts that North Korea has acquired the technologies needed for a hypersonic weapon.Hypersonic weapons, which fly at speeds in excess of Mach 5, or five times the speed of sound, could pose a crucial challenge to missile defense systems because of their speed and maneuverability.

North Korea’s previous test on January 5 came days after Kim vowed during a key political conference to bolster his military forces, even as the nation grapples with pandemic-related difficulties that have further strained its economy, crippled by US-led sanctions over its nuclear programme.

The economic setbacks have left Kim with little to show for his diplomacy with former US President Donald Trump, which derailed after their second meeting in 2019 when the Americans rejected North Korea’s demand for major sanctions relief in exchange for a partial surrender of its nuclear capabilities.

The Biden administration, whose policies have reflected a broader shift in US focus from counterterrorism and so-called rogue states like North Korea and Iran to confronting a near-peer adversary in China, has said it’s willing to resume talks with North Korea “anywhere and at any time” without preconditions.But North Korea has so far rejected the idea of open-ended talks, saying the US must first withdraw its “hostile policy,” a term the North mainly uses to describe the sanctions and joint US-South Korea military drills.

“Even with North Korea’s pandemic border lockdowns restricting trade and diplomacy, Pyongyang is determined to run an arms race against Seoul and deny Washington the luxury of focusing on Russia and China,” said Leif-Eric Easley, a professor at Ewha University in Seoul. North Korea’s advancing nuclear arsenal is at the core of Kim’s rule and what he clearly considers his strongest guarantee of survival.

During his 10-year rule, he has conducted a large number of weapons tests in a push to acquire the ability to launch nuclear strikes on the American mainland. But his country’s economy has faltered severely in the past two years due to the COVID-19 pandemic, the sanctions imposed over his nuclear ambitions and his government’s own mismanagement.

Next Story
India’s development partnership with Mali: Making difference on the ground