The visit of the chief has further consolidated the long standing bilateral relations between two countries and maritime security. 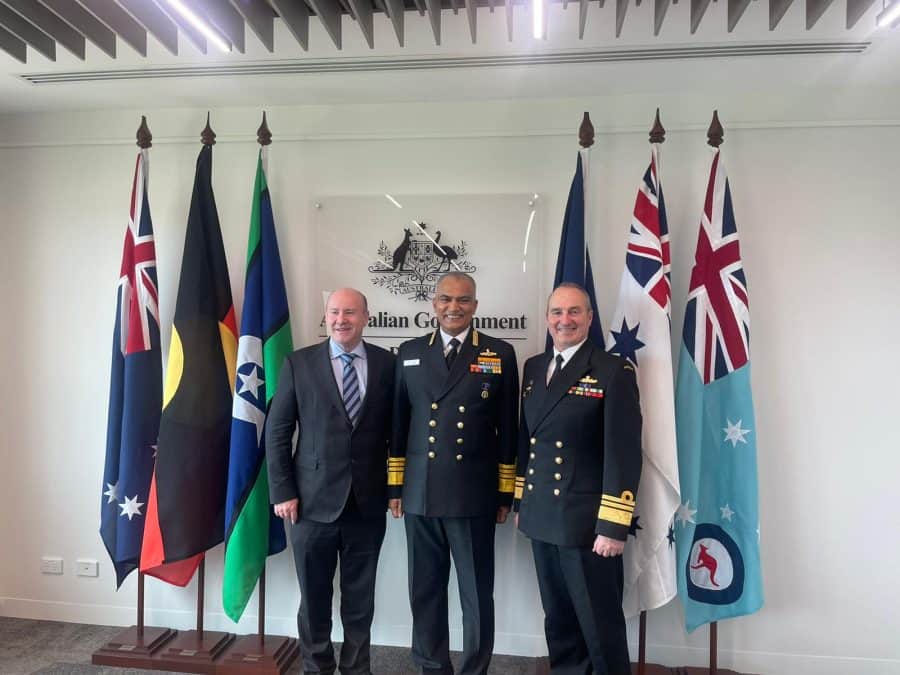 Close on the heels of the recently concluded QUAD Foreign Ministers meeting on the sidelines of the UN General assembly in New York City, the Indian Navy Chief Adm R Hari Kumar, has reached Australia.

According to the Indian Navy official statement, in his first official visit as the Chief of the Indian Navy he has been there from Sept 26-28, 2022.  The visit also comes following the successful participation of Indian Naval Ship Satpura and one P8I Maritime Patrol Aircraft in the recently concluded multilateral exercise KAKADU. This drill was hosted by the Royal Australian Navy (RAN) at Darwin.

The visit of the chief has further consolidated the long standing bilateral relations between two countries and maritime security.

Agenda during the visit

The discussion he had with his counterpart and other senior officers were focused on deepening their commitment to collaborative efforts in various sectors of bilateral convergence.

When the CNS met Air Marshal Robert Chipman, the Chief of Royal Australian Air Force, to enhance interoperability the two talked about further engagements in the maritime-air domain.

He also visited the RAN Facilities at HMAS Penguin and Hydrographic School and later accompanied by the Indian Ambassador to Australia Manpreet Vohra and Chief of RAN interacted with Australian Think Tanks to understand and to develop deeper maritime cooperation opportunities.

The two sides also talked about efforts to overcome the challenges of the maritime environment as well as the need to raise the level of synergy in relations.

There is a commonality of perspectives on several maritime security issues in the Indo-Pacific. Both sides have been working closely on different bilateral and multilateral forums including the Western Pacific Naval Symposium (WPNS), Indian Ocean Rim Association (IORA) and Indian Ocean Naval Symposium (IONS).

Last week in a first, external affairs minister Dr S Jaishankar met with the foreign minister of Japan, Australia and the US in New York City on the sidelines of UNGA. The meeting reaffirmed their partnership, especially in the Indo-Pacific Region.

At the end of the meeting, Dr S Jaishankar, Japan’s Yoshimasa Hayashi, US Secretary of State Anthony Blinken, foreign minister of Australia Penny Wong signed a set of guidelines on partnership on HADR (humanitarian assistance and disaster response).
So far this is the fifth high-level political engagement between the members of the QUAD – this includes leaders’ level summit and ministerial level too.

What is the HADR Agreement?

The HADR partnership was one of the outcomes of the QUAD summit in Tokyo this year. This agreement, according to reports, represents all the QUAD member countries that had first come together to cooperate to deal with disaster relief and response after the 2004 tsunami.

India in the QUAD meeting

During the meeting in New York, India’s focus was on the tangible and constructive items which are on the agenda of QUAD. India’s foreign minister talked about climate events and emergencies of unprecedented scale; COVID pandemic and the global impact of the ongoing Russia-Ukraine war.

Jaishankar also highlighted other initiatives of the grouping in the pipeline like the STEM fellowship. Scholars from all the four member countries will get an opportunity. And also on maritime domain awareness.