The recent launch of Zhu Hai Yun, the world’s first AI-powered drone carrier,raises questions like whether such a vessel will be used only for marine research orif such technology could be transferred and used for military applications. 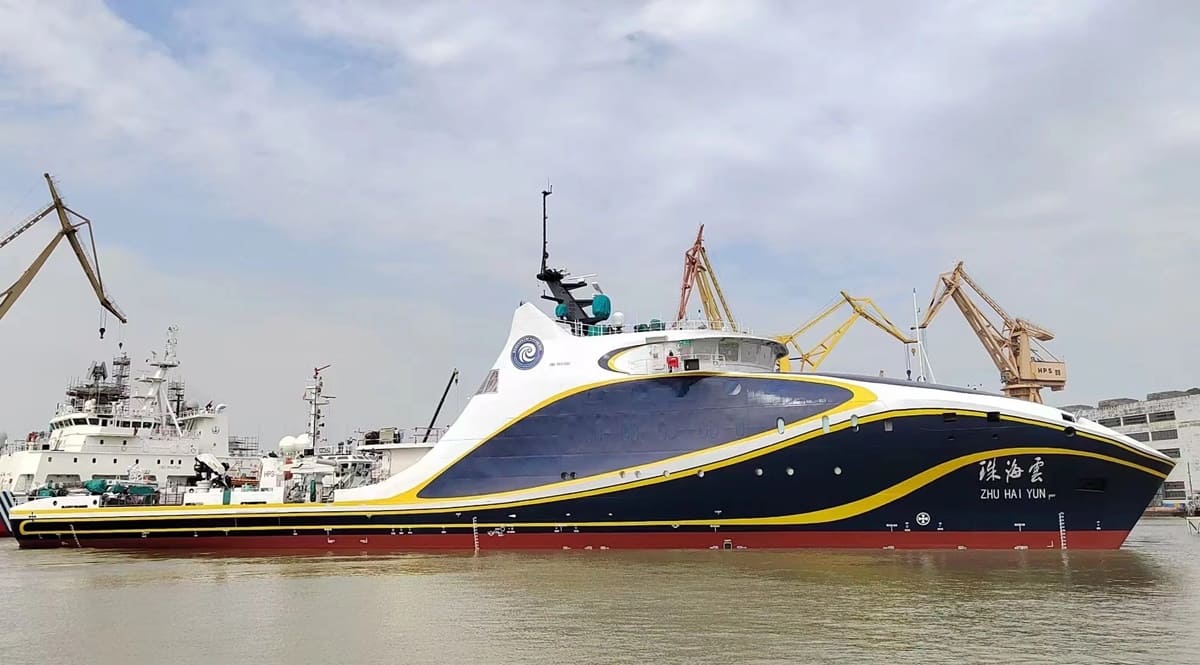 Unlike the US, China Overlaps the usage of AI and is using such technology for both civil and military purposes.

In recent years, the world has witnessed intense competition between the US and China, ranging from economic and military dominance so that they could secure superiority in new emerging technologies like Artificial Intelligence (AI). AI is considered a part of the Fourth Revolution; it is an enabling technology rather than a weapon, thus providing wide application of the technology for civil and militarypurposes.In such a regard, AI has become one of the main aspects of power competition between the US and China. Currently, the US enjoys dominance in this field, but in recent years advancement made through Research and Development (R&D) in AI in China has started to bridge the gap between countries. Unlike the US, China Overlaps the usage of AI and is using such technology for both civil and military purposes.

The recent launch of Zhu Hai Yun, the world’s first AI-powered drone carrier,raises questions like whether such a vessel will be used only for marine research orif such technology could be transferred and used for military applications. As the Zhu Hai Yun is considered a mothership, it is equipped to carry drones, unmanned ships, and submersibles on board,along with various systems and three-dimensional observation capabilities. Further, it allows China to collect and have a detailed topographic chart – including the seabed – and marine information of any area of their interest.Meanwhile, China is currently working to replicate the US Navy Sea Hunter, an unmanned drone submarine they launched in 2016. In this regard, the development of Zhu Hai Yun – completely made in China – provides Chinawith the needed opportunity to use such technology to build more AI-powered drones in the aerospace and maritime domain.

What is Zhu Hai Yun and what makes it special?

As HuangpuWenchong Shipyard built the Zhu Hai Yun vessel in Guangzhou, it can be seen as an unmanned vessel and a drone carrier. It can carry unmanned aircraft, surface vessels, and submersibles on its deck. In addition, the vessel is equipped with the Intelligent Mobile Ocean Stereo Observing System (IMOSOS), which is built by the Southern Marine Science and Engineering Guangdong Laboratory (Zhuhai). As the IMOSOS system provides the vessel with the capacity to conduct marine environment monitoring, disaster prevention and management, it also assists in collecting accurate marine information and other marine-related research activities.

With a displacement of 2,000 tonnes, a length of 88.5 meters, and a top speed of 18 knots (33 km per hour), it could operate automatically in the open waters, and if needed, it could be controlled remotely. Being labelled as a mothership, it could launch a swarm of drones for marine research and surveillance purposes, allowing China to understand and collect data on the topography and seabed of any region of their interest. As the seabed in the Malacca Strait region is uneven, in some regions, it ranges between 90 to 120 feet; having such a vessel at its disposal could come in handy to effectively navigate Chinese Naval vessels. It’s being argued that with the availability of such technology and the convenience Zhu Hai Yun provides, it could be used as a military vessel by the Chinese Navy.

Meanwhile, Chen Dake, who oversees the vessel’s development, argues, “Zhu Hai Yun is a new marine species capable of bringing revolutionary changes in ocean observations”. The development of such a vessel enhances China’s marine capabilities with higher efficiency at a lower cost as it involves fewer human operations. Further, Zhu Hai Yun is equipped with a three-dimensional dynamic observation system; it gives the drone carrier a three-dimensional view of any target region. Such dynamic observation capability is available as the vessels carry various air, sea, and submersible unmanned systems on the deck, giving both civil and military usage.

As the vessel is being projected as an asset available to be used only for marine-related purposes, it is being argued it could also be used for military applications and to deploy smart mines. Apart from deploying drones by Zhu Hai Yunfor marine research purposes, it could be used as a platform to deploy unmanned weapons and surveillance systems in the future. In recent years, China has invested heavily to enhance its maritime defence capabilities and created many facilities to enhance ship weapon testing capabilities. In such light, Zhu Hai Yun can also carry out target searching, which provides an advantage to China vis-à-vis the US in the South China Sea and East China Sea region.

Zhu Hai Yun is considered a prelude to the People’s Liberation Navy’s (PLAN) Type 076,the Landing Helicopter Dock (LHD), which is currently in the development phase and can carry the Unmanned Combat Aerial Vehicles (UCAVs) on its deck. On the other hand, developments and technological achievements give impetus to China and Chinese firms like Yunzhou Tech to develop such vessels. Moreover, Zhu Hai Yun acting as a mothership–to other drones and unmanned vessels – enhanced the Chinese Navy’s scope to conduct its drone swarming technology against its enemy effectively. Further the three-dimensional dynamic observations system will allow China to picture navigational routes and seabed better.

It additionally allows the Chinese Navy to effectively conduct overseas operations to secure its overseas economic and strategic interests.Considering how the Zhu Hai Yun could perform, it provides an edge to China if any conflict occurred along China’s coastline. Its launch came in the backdrop of the development of JARI, an uncrewed surface vessel (USV) referred to as a mini destroyer. With Zhu Hai Yunat at its disposal, it provides a better scope for China to understand the topography and seabed of the East China Sea and the South China Sea region.

China currently prioritises AI technologies to enhance itsunmanned combat systems to conduct reconnaissance and surveillance and effectively protect its claimed territory. In addition, in recent years, China has effectively employed AI technology for domestic and military purposes. For example, in recent years, China has used unmanned aerial vehicles (UAV) in the East China Sea and the South China Sea region to enhance their deterrence capabilities in any future warfare.

With Zhu Hai Yun at their disposal, China is working to avoid any USS Connecticut accident. As the drone carrier carries various sensors on the board, it could provide a better picture of the topography of the seabed, which would come in handy at the time of conflict. In such a situation, viewing Zhu Hai Yun’s launch only from a marine research perspective wouldn’t be enough, as we would fail to acknowledge the validity of the vessel for military application. Such development came when China made immense growth in advancing its AI capabilities to develop unmanned surface vehicles for maritime security, controlling sea lanes and securing marine resources for itself. As China lacks export restrictions, the US is currently worried about the global proliferation of UAVs and other AI weapons. Thus, the unrestricted export of such technology and weapons in coming years needs to be looked upon as it will become a concern from an economic and security perspective.

Meanwhile, China and the US are engaged in stiff competition to obtain superiority in effectively using AI technology in the UAV system, which will only become intense in the coming years. The launch of the Zhu Hai Yun came when the relationship between the US and China on Taiwan Issue was going through a rough phase. Currently, the US-China is engaged in tense great power competition as the point of friction between both the countries has only widened.In recent years,the development of hypersonic and its defence weapon system, the Uyghur, Hong Kong, and Taiwan issues and development around the recent QUAD meeting have intensified the relationship between the US and China. For China, development in any technology should have ‘dual application’ (civil and military). In such a situation, the US-led West requires a broader approach and better communication and cooperation to ensure China’s rise doesn’t become assertive.

(Author is Research Associate, Centre for Air Power Studies, New Delhi. Views expressed are personal and do not reflect the official position or policy of Financial Express Online. Reproducing this content without permission is prohibited).