Lessons to be learnt from UK’s decision dilemma on tanks

We need to start the process of procuring the next Main Battle Tank, as well as seriously evaluate the requirement of a suitable Light Tank. 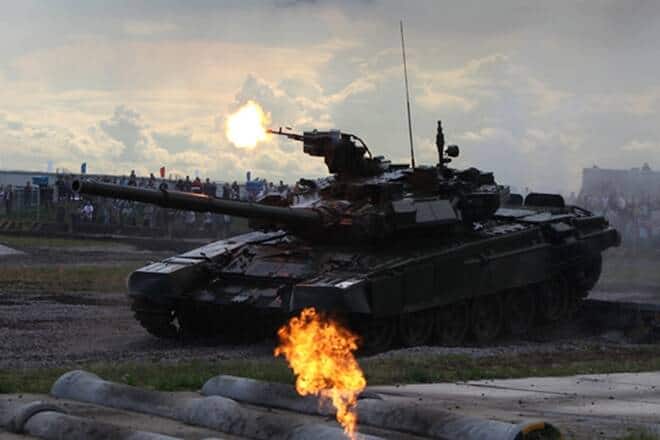 The history of the tank has very largely been the history of ground warfare in the last hundred years. (Image: RIA Novosti)

General Sir Rupert Smith, a British Army paratrooper who commanded the 1st Armoured Division in his book ‘Utility of Force’ wrote that; “Armies do not prepare for the last war, they frequently prepare for the wrong one- if for no other reason the governments will usually fund only the anticipated primary threat as opposed to the risk and the opponent will usually play to his opponents’ weakness (the risk) rather than the strength (the primary threat).”

The debate in the UK, resulting in the decision to do away with their heavy tanks may well be traced to the comments of Gen Rupert Smith. Having delayed modernization of its main battle tank fleet, and now faced with the prospect of an expensive replacement, or costly upgrades, the UK is in a decision dilemma regarding the options available.

In essence a tank is essentially a mobile weapon platform, with protection for its crew to enable it to move in an unhindered manner on the battlefield. The essential elements of a tank remain firepower or lethality; mobility or manoeuvrability; and protection or survivability; along with their various subsystems which include communications and sensors. The design of the tank is essentially a careful blend of these factors. It is this balance of its three essential components that makes the critical difference in its effectiveness.

First introduced to Service in World War I, as ‘Little Willie ‘, the first large scale use of tanks was in the battle of Cambrai in 1917, where they were used to essentially break the stalemate. It came into its own in World War II and has held pre-eminence in dominating the outcome of conventional conflicts in varied terrain such as deserts, flat plains and obstacle-ridden terrain and has also been effective in jungles, mountains and built-up areas. In today’s context, tanks are operating even in the icy heights of Galwan Valley, Depsang Plains and of course Chushul where they were employed even in 1962.

A tank does not fight alone and is part of an all-arms team which in its most lethal form is represented by an Armoured Division. This includes not only five to six Armoured Regiments each with 45 tanks, but also up to four Mechanised Infantry Battalions fully equipped with Infantry Combat Vehicles, Self Propelled Artillery, Air Defence Forces, Communications and Electronic Warfare as well as the Services and Logistic elements to sustain these in combat along with the support of Attack Helicopters and Aircraft. It is a complete package, and unless the ambition is matched with the resources required, it will lack the ability to perform in the desired manner. The lethality of an Armoured Division rests not only on its equipment but also on the unique skill sets of its manpower, its training and ethos.

Maintaining an Army is prohibitively costly, hence, its size and structure though based on a countries threat perception is also dictated to by the strength of the nation’s economy. The UK is currently facing a dilemma regarding the future of its combat strength, and capability, although this situation may not have come to a head if it’s existing fleet had been replaced and upgraded over the years. As presently, it has seemingly realized that it simply does not have the capital to replace its fleet of tanks and the blame cannot rest on the state of the economy due to COVID -19.

There are basically, three options available to the UK today. Firstly, replacement of the Challenger 2 by either buying fresh tanks or modernizing the existing fleet. While this option would preserve its armoured capability, it is the most costly and the amount of money spent would be a lion’s share of the existing capital outflow and would have an immediate impact on upgrades of other weapon systems and also on the economy. The positive message would, of course, be its commitment to ensuring its responsibilities as part of the NATO Alliance and its standing within NATO.

Secondly, and the one being actively debated, to do away with heavy armour and concentrate on building capabilities in Attack Helicopters and Missiles. As they form part of a NATO Alliance, the UK’s contribution can be in terms of other components of an All Arms Team and the provision of tanks can be the responsibility of the US and Germany. This will, of course, result in reduced standing within the NATO but will be easier on the pocket and as an Island nation, they feel they are fairly well insulated and no longer visualize the threat from Soviet armour as was perceived during the cold war.

Thirdly, adopt a hybrid strategy, by modernizing a part of the tank fleet. This could include replacing the 120mm Rifled Gun with the 120mm Smooth Bore Gun currently used on the Leopard to increase its lethality. At the same time build up an Attack Helicopter and Missile capability and concentrating on cyber, reconnaissance and other force enablers. In this manner, they retain their ability to operate armour in the modern battlefield milieu.

The choices are hard. Whatever; path the UK chooses will be dictated both by its threat perception and by its financial strength. While the first option may be the most desirable, the bottom line is that the UK simply does not have the money to fund it. Their Challenger 2 is no longer in production and the costs of replacing this with the Leopard are prohibitively expensive. The second option seems viable but is radical to a greater degree and will result in doing away with a capability that has taken years to master and that is the ability to operate an Armoured Formation in Combat. The third option seems to be the middle path and appears to be the direction likely to be taken, though it will render the UK to be more dependent on its NATO allies. All three choices in essence represent a losing battle.

Are there any lessons in this dilemma for us in the Indian context? Can we afford to wake up one morning and be confronted with a situation in which we realise that we don’t have the capability to defend our borders and that we have to reduce our strike capability resulting in a shift in our offensive –defence paradigm, thereby giving our adversaries the luxury to dictate terms? The truth is that we cannot be under-resourcing our Defence Forces without it having a direct bearing on our capability and ability while our adversaries continue to build theirs.

The reality in our context is different. We are not an island country and are confronted by two belligerent neighbours on our Western and Northern borders. Pakistan has a large inventory of Armoured Fighting Vehicles (AFV’s) with a mix of both Chinese, Al Khalid, Al Zarar, T – 85, T-69 & T-59, and Russian equipment T – 80 UD, including those assembled in their Heavy Industries complex in Taxila. The Chinese have been known to deploy their Light tank ZTQ-15 against us in High Altitude areas. We don’t have the luxury of being part of an alliance, such as the NATO which guarantees our security. Hence, while our priority remains modernization through indigenisation, the reality is that our own indigenous tank, the Arjun is still is dependent on a lot of critical components such as the engine and fire control system which are imported, has an issue with its weight and uses a 120 mm rifled gun. The Army is yet to place an additional purchase indent apart from the existing 124 tanks.

The shock effect generated by the tank on the battlefield in our context must remain. The versatility of armour cannot be wished away. It is therefore imperative that we don’t let it fade into oblivion. Its coercive and deterrent qualities are far too valuable to be lost due to delays and procrastinations as far as decisions are concerned. Hence, it is a necessity and not a choice that we concentrate on upgrading and modernizing our fleet of AFVs.

Presently, we are not in a state of panic as we do have a mixture of T- 72, T- 90 and two Regiments of the indigenous Arjun tanks. These are complemented by the BMP -2, Infantry Combat Vehicles (ICV’s) and other support elements and force multipliers. However, the T -72’s have completed nearly forty years in Service and even though they have undergone overhauls and upgrades, their replacement needs urgent consideration. Given the cycle of procurement, trials and operationalisation of formations, the critical question is that should we still be at the starting blocks?

We need to start the process of procuring the next Main Battle Tank, as well as seriously evaluate the requirement of a suitable Light Tank. So far we have been through a cycle of US tanks, the Stuarts and Shermans in the 1950s and 1960s, the Centurion from the UK in the 60’s followed by the Vijayanta (which was a licensed production of the Vickers). We also operated the AMX -13 Light tanks from France in the ’60s. After the 1965 War, we switched to Soviet origin equipment, and have successfully operated the T-54, PT – 76, T-55, T-72 and T- 90 tank. The options ahead of us are to import tanks, which decision narrows down to the T-14 Armata, due to our expertise in operating Soviet equipment or the development of a platform based on the existing Arjun. We cannot be confronted by an existential choice.

The history of the tank has very largely been the history of ground warfare in the last hundred years. Not yet superseded by any other weapon system, in the hands of well trained, highly professional tank crews it will continue to dominate the battlefield both as an instrument of deterrence and of destruction with its absolute power in the foreseeable future when used boldly and imaginatively as has been demonstrated in the past in the Indian Context. Mechanised Forces will continue to form the core for hard power in our context.

(The author has commanded the prestigious 1 Armoured Division and 18 Cavalry one of the oldest Regiment in the Indian Army. He has been an instructor at Defence Services Staff College several times and has held prestigious staff appointments. Views expressed are personal).