Ahead of the expected visit of the French President Emmanuel Macron in March, on January 23, an agreement was signed between senior officials of NMRL and Naval Group France in Mumbai. 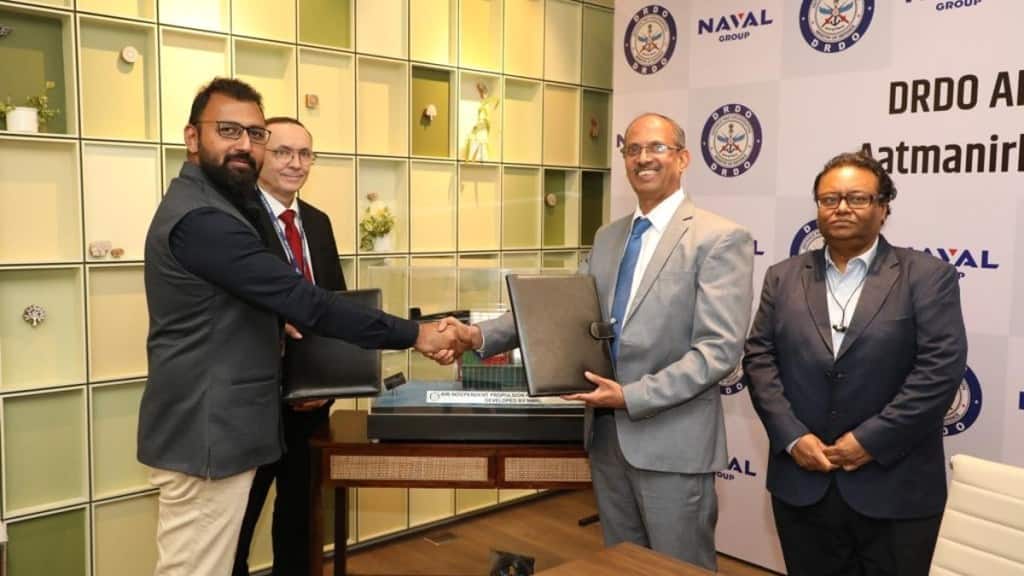 The French Naval Group as per the agreement is expected to integrate indigenous AIP in the Kalvari class submarines. (Image: DRDO)

In 2024-2025 INS Kalvari (Kalvari class submarine under Project 75) is expected to come up for retrofit and the Ministry of Defence and the French Naval Group have said it will be fitted with the indigenous Fuel Cell-based Air Independent Propulsion (AIP) system.

This AIP is a result of Defence Research and Development Organisation (DRDO) Naval Materials Research Laboratory’s (NMRL) R&D and sharing this technology with L&T.

Ahead of the expected visit of the French President Emmanuel Macron in March, on January 23, 2023, an agreement was signed between senior officials of NMRL and Naval Group France in Mumbai. The French Naval Group as per the agreement is expected to integrate indigenous AIP in the Kalvari class submarines. And, as part of the agreement is going to certify the AIP design for submarine integration.

The submarines as Financial Express Online has reported earlier are being built at the Mumbai based Mazagon Dock Shipbuilders (MDL) with the technology transfer from Naval Group (former DCNS) and the Spanish state-owned entity Navantia.

In 2022 all OEMs had withdrawn from the Project 75 I programme due to certain conditions mentioned in the Request for Proposal (RfP) especially the one related to futuristic AIP. The Russians, the French Naval Group were the OEMs who had withdrawn.

According to a former submariner, the DRDO Fuel Based AIP could become obsolete by the time the rest of the boats of Project 75 come up for retrofit. Therefore there is an urgent need to ensure that the boats get the latest technology when they come up in the next decade.

Why is AIP important for Project 75?

Agreeing with this point, Girish Linganna, Aerospace & Defence Analyst says: “Since the Indian Navy has decided to use the AIP system; it logically requires technology that will remain relevant for the next ten to twenty years. However, the P-75I tender states the Indian Navy wants futuristic technology, which is already proven. Now, most contenders have withdrawn from the tender since they do not qualify for it.”

According to Joseph P Chacko, geopolitics analyst and publisher of ‘Frontier India’, “In the Indian context, where the regions of interest are huge and widely spread and where the principal function of the submarines is offensive, AIPS may not be the ideal answer. This is accentuated by the ability of the boats to launch their ordnance from long distances and the requirement to rapidly and nimbly swap sites of action to maximise their exploitation.”

In his view an AIP makes sense for the Sishumar class of submarines which can be used for Brown / Blue water assignments. “The Kalvari class should be assigned blue water roles with, preferably, hybrid propulsion that can increase speed and endurance.”

In the official statement issued by the Ministry of Defence, NMRL has claimed that the fuel based AIP technology has been successfully developed with the support of Indian industrial partners. And now the technology has reached a stage of maturity for industrialisation. The AIP is said to be a force multiplier as it enhances submerged endurance by several folds and it is unique as the hydrogen is generated onboard.

The agreement signed is considered to be an important step towards the detailed design certification of the energy module. The DRDO lab is expected to perform along with the Indian industry and design the platforms which will be impacted in the process of the AIP integration inside the Indian submarine by Naval Group. This process will lead the way to the start of the localisation and industrialisation of AIP. And the Indian industry will be responsible for the hull fabrication which will be used for future fitment onboard the submarines.

Also Read
Submarine Day: Its INS Kalvari connection and everything you want to know

Chairman and Chief Executive Officer at Naval Group France, Pierre Eric Pommellet has highlighted that the group is proud to cooperate with Indian stakeholders to safely integrate the AIP in the Kalvari class submarines Mazagon Dock Shipbuilders (MDL) has built.