Indo-Pacific trilateral development cooperation to be set up soon: EAM

Addressing a joint press interaction along with his French counterpart Catherine Colonna, external affairs minister Dr S Jaishankar said that the Indo-Pacific Trilateral would also be a platform for Indian innovations and start-ups 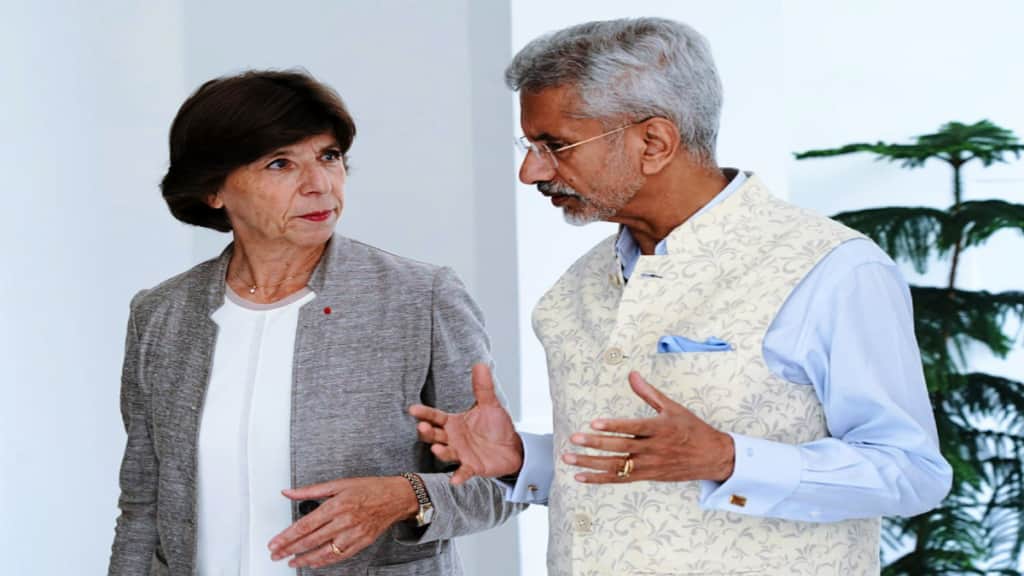 India sees France as a major power with a global outlook and an independent mindset.

To facilitate development projects especially in the framework of the International Solar Alliance (ISA), India and France have decided to establish Indo-Pacific Trilateral Development Cooperation on Wednesday (September 14, 2022).

Addressing a joint press interaction along with his French counterpart Catherine Colonna, external affairs minister Dr S Jaishankar said that the Indo-Pacific Trilateral would also be a platform for Indian innovations and start-ups who can demonstrate their relevance to the requirements of other societies.

According to the minister, ISA has formed projects in three countries which will demonstrate the impact India and France can make in countries like Senegal, Bhutan and Papua New Guinea.

During the discussion between the two ministers in New Delhi, the focus was on the tensions in the Indo-Pacific, developments in Afghanistan, Covid-19 pandemic, ongoing Russia-Ukraine conflict and the prospects of the Joint Comprehensive Plan of Action.

India sees France as a major power with a global outlook and an independent mindset, the minister added.

Later in the month, in New York, the trilateral of India, France, Australia are going to meet, he said and also stated that another trilateral which has UAE based on the positive feedback is soon going to be upgraded to the Ministerial level.

Highlighting the special and unique partnership between India and France, the visiting minister Catherine Colonna touched upon the issue of Russia-Ukraine conflict. She said, “whatever is happening in Ukraine is not only an issue for Europe, it is a serious matter for the entire world.”

Welcoming the first round of negotiations of the India-EU negotiations on trade, investment and geographical indicators, the minister said this was also discussed as well reviewed the progress in various sectors including nuclear, space, defence and more.

More about the talks on Wednesday

Besides the joint efforts for free, rules based and open Indo-Pacific, the two ministers discussed many other global issues, and common efforts to respond to economic challenges, especially food security.

Since the two countries have a comprehensive strategy for the Indo-Pacific, both countries have accelerated the implementation of the Joint Roadmap on the Blue Economy and Ocean Governance which was adopted earlier this year in February.

A major international event Sea Tech Week in Brest will bring together blue economy stakeholders from September 25-27 where India will be the first Country of Honour.  Also in the coming weeks, the European nation will second an expert to India’s National Institute of Ocean Technology.

To overhaul the water supply system in Chandigarh to ensure access to sustainable drinking water 24/7, Credit Facility Agreement was inked. Under this agreement the French Development Agency (AFD) will be providing a 48-million-euro loan.

With a focus on climate change and regenerative agri practices, a private sector subsidiary of the French Development Agency: Proparco has invested 12 million euros in Sahyadri Farms. This is an Indian agri-food company.

In an effort to further boost exchange of young talents aged between 18 and 35 years, at the ministerial talks both sides expressed their commitment to reaching the quota of 500 beneficiaries on each side as soon as possible. This is part of the Young Professionals Scheme under the Indo-French partnership agreement on migration and mobility.

Earlier in the day the visiting minister reiterated France’s goal to welcome 20 000 Indian students by 2025. Both countries have launched a new Indo-French Campus for Healthcare. Under this programme dual degrees in healthcare will be conferred from 2023 onwards to students from the entire Indo-Pacific region.

She also highlighted the success of the Bonjour India festival. This festival has drawn so far more than 100 000 participants in 19 cities since March this year and around 116 events have taken place. This was a gift from France on the 75th Independence Anniversary. Early next year, France looks forward to India’s reciprocal Namasté France festival.

As part of expansion of its diplomatic network in India, France has decided to open a Bureau of France consulate in Hyderabad.