In an effort to fast track acquisition of MH-60 ‘Romeo’ anti-submarine helicopters for the Indian Navy, the government has sent a ‘letter of request’ to the US administration for $ 2 bn deal. 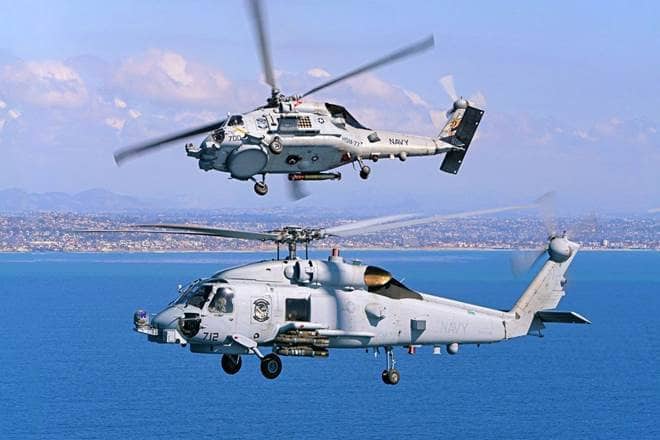 The Indian Navy needs 24 of these fourth-generation helicopters armed with torpedoes and missiles are used for anti-submarines warfare.

In an effort to fast track acquisition of MH-60 ‘Romeo’ anti-submarine helicopters for the Indian Navy, the government has sent a ‘letter of request’ to the US administration for $ 2 bn deal.

According to experts, India-US military sales are through the Foreign Military sales (FMS). “Under this procedure, India has to send a ‘letter of request’ giving details of what is the Indian side looking for and if the US can meet the request.” The Indian Navy needs 24 of these fourth-generation helicopters armed with torpedoes and missiles are used for anti-submarines warfare.

As has been reported by FE Online earlier, the Ministry of Defence (MoD) had recently issued a issued the Acceptance of Necessity (AoN) with a validity of 18 months for acquisition of 24 anti-submarine and anti-ship multi-role helicopters (MRH) for the Indian Navy.”

Also Read
Is the mega military project to acquire 114 fighters for the IAF in jeopardy?
Apache for the Indian Army to land in 2024; will have indigenous fuselage!
Navy to get `VAGIR’ sub next week; no Air-independent Propulsion deployed
Wait is over! Production of legendary Kalashnikov AK-203 assault rifles start

These helicopters are expected to provide a vital capability for the Indian Navy in the Indo-Pacific region, where according to the Trump administration India is considered as a major partner to ensure stability and prosperity in the strategic region.

As has been reported by FE earlier, the approval has already been given by the government for the US based Lockheed Martin’s Sikorsky MH-60Rs `Romeos’ fitted with sensors through the FMS route from the US as it is a sale between two governments.

In an exclusive interview to FE, Vivek Lall, Vice President of Strategy and Business Development had said that “The MH-60R provides a vital capability for the Indian Navy in the Indo-Pacific region. The significant investments made in the MH-60R by the US Navy and industry provides the unique assurance that it has undertaken the most rigorous testing.”

“The US Navy has a robust road map to add capabilities to the MH-60R as the aircraft will be in their fleet for several decades. With over 450 anti-submarine warfare capable Seahawks flying around the world and millions of flight hours, the expertise Sikorsky/Lockheed Martin is able to offer is unmatched,” Lall had added.

For the 24 anti-submarine helicopters, the machines will be customised keeping in mind the Indian Navy requirement. Almost a decade ago the government had sent out an RfI for Multi Role Helicopter (MRH) to replace the Sea King for the Indian Navy. However these helicopters have yet to come for the navy as they are the most critical aspect of the frontline warships like the aircraft carriers, destroyers, frigates and corvettes.

All the deals with the US have been through the FMS route including the aircraft for the Indian Air Force C-17 Globemaster-III strategic airlifters, C-130J “Super Hercules” planes and the recently inducted M-777 ultra light howitzers, Apache and Chinook helicopters, P8I maritime patrol aircraft—all this to a tune of $ 15 bn over a decade.