Onboard the deck of IAC-1, the defence minister said, “The IAC boasts of nearly 75 percent indigenous content. This includes the design, the steel used in the construction and key weapons and sensors.” 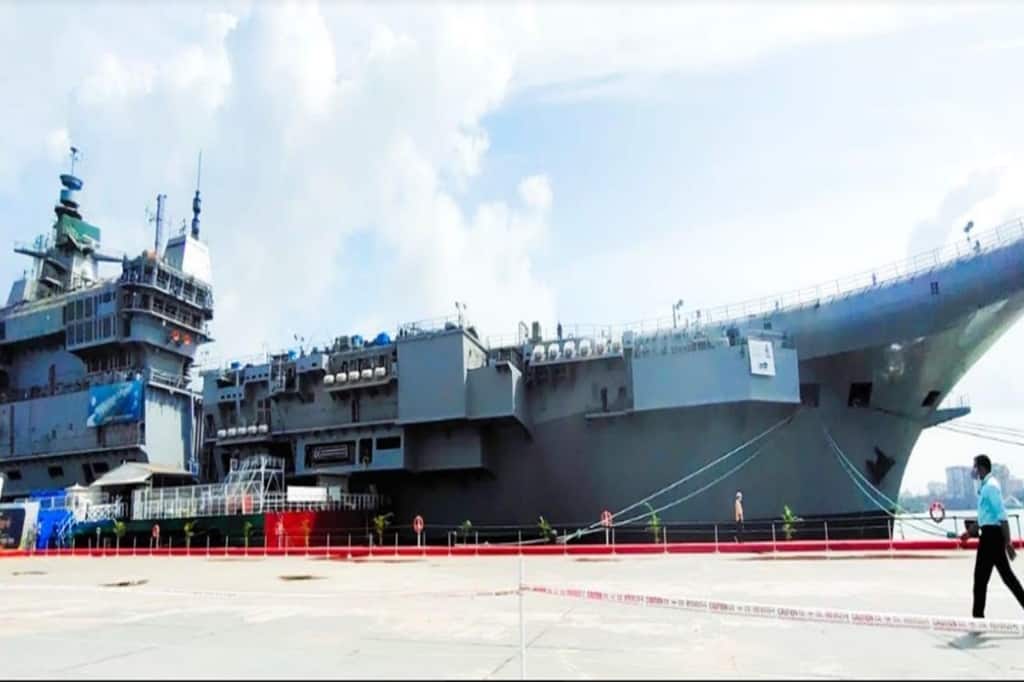 Onboard the deck of IAC-1, the defence minister said, “The IAC boasts of nearly 75 percent indigenous content. This includes the design, the steel used in the construction and key weapons and sensors.” (Photo source: Indian Navy)

To help the Indian Navy in its modernisation plans, harnessing India’s indigenous industry and know-how, is a key priority of the government, says the defence minister Rajnath Singh. The minister reached Cochin Shipyard, Kochi today (June 25, 2021) and reviewed the progress made in the construction of the country’s first indigenous aircraft carrier (IAC-I) Vikrant. The IAC-1, after completing all trials, is expected to be commissioned in the Navy next year.

Onboard the deck of IAC-1, the defence minister said, “The IAC boasts of nearly 75 percent indigenous content. This includes the design, the steel used in the construction and key weapons and sensors.”

On the modernisation of the Indian Navy, the minister talked about the Defence Acquisition Council’s (DAC) approval for issuance of RFP for Project 75-I. This project is going to be under the Strategic Partnership model, and is expected to give further boost to indigenous development of niche manufacturing technologies. Today, 42 of the 44 warships on order are being built at Indian shipyards.

He also said that “IAC, is India’s pride and a shining example of Atmanirbhar Bharat. Despite COVID, the project was originally approved by the NDA Govt., and has made significant progress.”

When will the IAC-1 be commissioned?

It is expected to be commissioned next year in a befitting tribute to 75 years of India’s independence.

This IAC-1’s reach and versatility will help in securing the country’s interest in the IOR and beyond.

The defence minister on Thursday (June 24, 2021) had also reviewed Project Seabird at Karwar, Karnataka. Work is going on at the navy’s premier base in Karnataka’s Karwar. For Indian Navy, the Karwar base will be the largest in Asia and will provide the facilities and infrastructure to support its operations in the Indian Ocean Region (IOR) and beyond.

During his visit, in his review address the minister highlighted the government’s focus on two major ongoing projects – Project Seabird and Indigenous Aircraft Carrier (IAC) and commitment for a strong navy.

In an official statement, the minister said “These measures will help to enhance the Indian Navy’s operational reach and prowess to protect India’s maritime interests.”

The Indian Navy is poised and combat ready to tackle any challenge, he said, adding, “Navy’s proactive forward deployment during the Galwan standoff signalled our intent that we seek peace but are ready for any eventuality.”

Talking about the Navy’s contribution during the surge in the number of COVID positive cases, the minister highlighted its efforts in bringing back Indian citizens from overseas during Op Samudra Setu-I, and then in Op Samudra Setu II getting the much needed Liquid Medical Oxygen.

The IAC-1 before getting inducted in the Navy has to undergo a series of sea trials before it gets commissioned. The project is already running behind schedule.

The first, second and third batch of crew have already been identified, even the name of the Capt has been identified and approved. Once the IAC-1 is delivered to the Indian Navy then only the flight trials will start.