Indian Navy, INS Visakhapatnam and the debate about Indigenization

Social media was flooded with slick videos of the ship cutting through the waters making high speed turns and showcasing its modern weapons. Much was also written in the media about the indigenous content onboard the ship and how this ship was a success story of indigenous warship building industry. 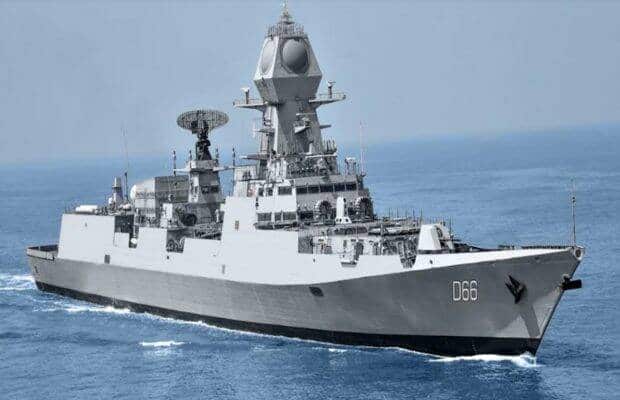 The official Ministry of Defence position puts indigenization onboard INS Visakhapatnam at 75 percent.

The Indian Navy celebrates the Navy Day on 04 Dec 2021 and this year it celebrates it as the Golden Jubilee of the glorious naval victory of 1971. In the march up to Navy Day, the service got two new additions to its force, INS Visakhapatnma and INS Vela. Both these are being touted as symbols of indigenous ship-building. Commander Digvijay Sodha (retired) writes about the debate on indigenization.

Two days later, on 25 Nov 2021, the Indian Navy commissioned the fourth of the Scorpene class submarines built at the Mazagon Dock Shipbuilders Limited (MDL), Mumbai. This was a bigger achievement in indigenization and again the social media was flooded with videos and images of the technology on display onboard this steel shark.

As expected, there was also significant print and online real-estate given to the discussion about how indigenous these new shiny additions to the Navyactually were? The official Ministry of Defence position puts indigenization onboard INS Visakhapatnam at 75 percent.

This piece is not trying to prove or disprove any of the arguments about indigenization onboard these two vessels. This piece is trying to tell a story about strategy! A story which positions the smallest of our armed forces as the leader in strategic thinking. It is a story that shows that in the Indian Navy, strategy has been coherent, consistent, and continuous.

Many may have read or heard the oft repeated idea that India is essentially a maritime nation. We have a 7000+ Km coastline and many major and minor ports. 95 percent of our trade (by volume), as per the Ministry of Shipping, is undertaken via the sea. Geographically, India sits at the head of the Indian Ocean which is the busiest maritime trade highway in the world. All true.

It is also true that India has historically been a ship building nation. The temples in Java and Sumatra clearly indicate the influence of the Cholas. In fact, the Cholas traded across the seas as far as Japan. What did they trade on? Ships built in India. The Gujarati merchants traded across the Arabian sea with the middle east on Indian built dhows.

If we have been building ships for many hundred years, have we lost the art? Not necessarily. Mumbai (then Bombay) dockyard built the second oldest ship still afloat, the HMS Trincomalee in 1817. The very dry dock where this ship was built is still operational at the Naval Dockyard in Mumbai. When India won her independence in 1947, the British left behind a very small naval force, a handful of ships, and some training and maintenance units. The officers in the Indian Navy at that time had participated in World War II onboard British ships and had seen first-hand that, in conflict, ships and submarines are lost. They also understood that buying or inheriting old ships from advanced navies of the world would not be enough for maritime India. They probably struggled most with the ‘make or buy’ decision that is so common in business strategy considerations today. They pursued the government to start a ship building program. It was not easy.From the days of Admiral RD Katari, the first Indian naval chief, in 1958,to the time when Admiral AK Chaterjee became the first four-star admiral in 1967, the Indian Navy convinced the government to invest in ship building.All the while also fighting for its very survival by trying to convince the leaders and bureaucrats of our nation to buy ships (even aircraft carrier Vikrant, which was purchased in 1957) to keep our numbers up. The irony of the arguments they must have had to make cannot be lost on anyone who seeks to influence budgetary decisions.

In 1966, the keel of the first frigate, INS Nilgiri, was laid in India. The ship was launched by the then Prime Minister Mrs Indira Gandhi. What is of greater importance is the work that went behind convincing a cash strapped government and bureaucracy to spend money on building a warship for the Navy, which was operating old ships purchased from other more developed navies like the British.

If strategy is the continuity and coherence of policy & action to a long-term end state, there is no better proof that it has been the strategy in the Navy to move the needle towards producing modern warships indigenously. It is this strategy that is driven relentlessly, every day, in the corridors of the Sena Bhavan and the South Block by personnel in whites. Despite all-round arguments that indigenous equipment was not as good as foreign equipment, the Navy and its leadership stayed its course to keep pushing for ships built in India. Modern warships are complex beasts. To be able to build quality vessels from a blank slate takes years of experience and errors can be disastrous.

Some detractors may point to the neighbourhood and indicate how much faster some others can build warships. That argument is not untrue, it is a fact. However, every industry in a country has a journey. Warship building is not an industry which prompts private competition in India. It has only one customer, the government. Yes, there are some spin-offs which can be marketed to a wider market, but the core funding comes from government(s).

Therefore, as the Indian Navy celebrates the Navy Day in the Golden Jubilee year which marks 50 years of the famous naval victory in 1971, it can be justifiably proud to have been the sponsor of indigenous warship building. The service should also be proud of staying true to its strategy of coherent action to achieve capabilities, far in excess of what it could have had otherwise.

Strategy remains a buzz word not only in the military but in the business world as well. This article would like to emphasise that warship building in India is a strategy case study and as a nation we must be proud that there are shining examples of our ship-building capability in the form of the first indigenous aircraft carrier, the mighty destroyers, the silent submarines and many more vessels that our shipyards deliver. Can we improve on this? Of course. Will we? The nation should rest assured that the Indian Navy will continue to pursue this strategy.

(The author retired from the Navy in 2020. In his naval career, he served as the operations officer of the Western Naval Command, the navigator of the Western Fleet and INS Viraat among other appointments. He is currently navigating his way into the corporate world. Linkedin: Digvijay Sodha Views expressed are personal and do not reflect the official position or policy of Financial Express Online. Reproducing this content without permission is prohibited).