In a record time of 88 days India and UAE ( its 4th largest strategic trading partner) concluded a Comprehensive Economic Partnership Agreement ( CEPA -Feb 18,2022) covering over 90% of the tariff lines and enhancing and unleashing great potential for trade and investments on preferential basis. 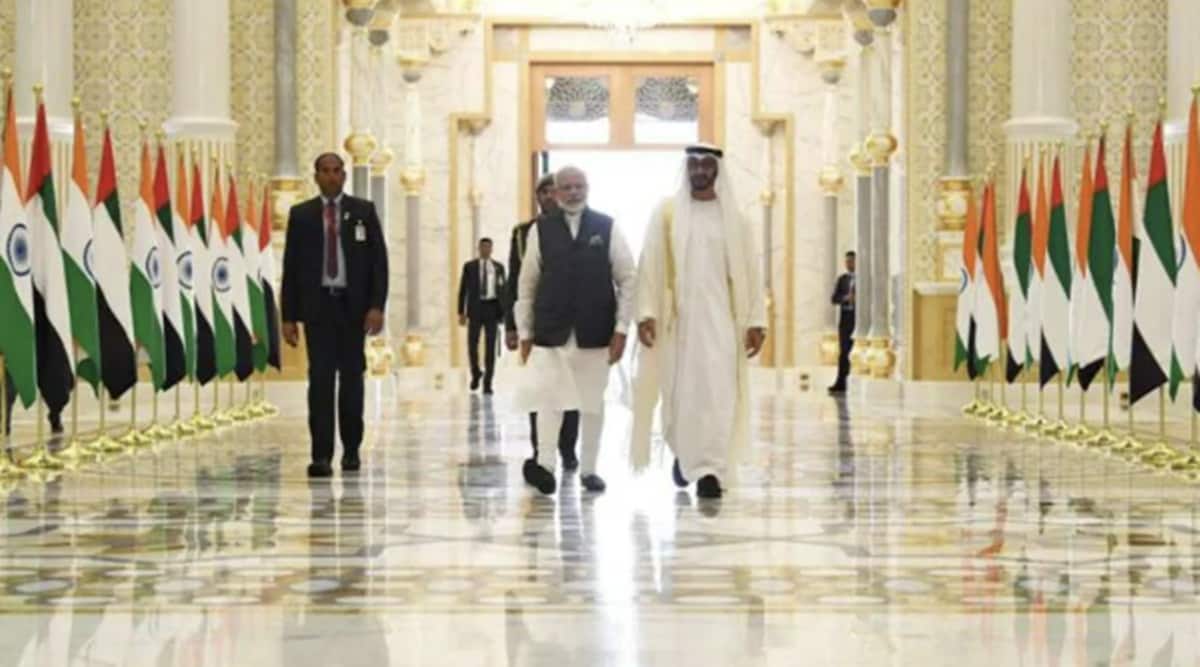 Prime Minister Modi has been to UAE four times and was to visit the Dubai EXPO 2020 that was postponed due to the pandemic. (File photo: MEA Twitter)

After a hiatus of decade old distaste for the Free Trade Agreements (FTA), the Indian establishment is creating a web of free trade agreements with major strategic partners, which might ensure a better deal for market access this time. In a record time of 88 days India and UAE ( its 4th largest strategic trading partner) concluded a Comprehensive Economic Partnership Agreement ( CEPA -Feb 18,2022) covering over 90% of the tariff lines and enhancing and unleashing great potential for trade and investments on preferential basis. For years India has been hoping to finalize the FTA with the GCC (Gulf Cooperation Council) which is still some distance away. Hence, plucking the low hanging fruit became the preferred option. Likewise, India and Australia signed a mini trade deal overcoming the sensitivities of certain products like in the dairy sector and market access issues. In addition, negotiations with the UK, Canada and Israel are at an advanced stage. Even with the US , despite Biden Administration going slow, New Delhi hopes for some kind of a deal .The US led Indo-Pacific Economic Forum (IPEF) has broadened the economic cooperation potential in an open ended format and matrix providing an alternative to China led RCEP and BRI which India as such does not subscribe to for sovereignty and security reasons.

As such during PM Modi’s eight years of leadership, relations with West Asia especially with GCC countries and particularly with the UAE have been catapulted to a truly strategic orbit which is eking out significant politico-economic dividends. As such, UAE, braving to be part of the Abraham Accords with Israel , showed its independent and bold foreign and economic ‘ No problem’ policy initiatives accompanied by socio-economic reforms . Only recently UAE and Israel signed the first ever FTA in the region. Moreover, a new and younger leadership have more than adequately harnessed the intent to enrich the partnership with India across bilateral to regional to plurilateral context. As per the assessments, CEPA has the potential to promote upward mobility throughout the economic value chain, resulting in hundreds of thousands of job opportunities in both countries. In five years, bilateral trade is expected to grow by USD 100 Bn in goods and USD 15 Bn in services. This ground-breaking agreement will facilitate the free flow of goods, services, capital, technology, and people, as well as mutually beneficial collaboration.

Also Read
Agniveer: An army veteran’s detailed argument against Agnipath scheme – Part 1
Agnipath and Agniveer: What it is and how it will work? Here’s everything you need to know
Astra missile contract with BDL: Is it another step in opening an export pathway?
CDS – The bonded hombre

The West Asian QUAD – rechristened as ‘I2U2’, with participation of Israel, UAE and USA- all three being India’s strategic partners , has moved apace with an upcoming virtual leadership Summit during President Biden’s West Asian tour. He also intends to assuage and reassure the Saudis among others in the wake of the severe adverse global economic, food and energy crisis attributable to Russia Vs US &Ukraine War.

Prime Minister Modi has been to UAE four times and was to visit the Dubai EXPO 2020 that was postponed due to the pandemic. He might be there again on a short visit to express personal condolences on the demise of ailing President Khalifa bin Zayed while conferring the way forward with his friend current President Mohammed bin Zayed.

However, an interesting announcement was made by Indian Trade and Industry Minister Piyush Goyal, on his way back from the recent WTO Ministerial (MC12)-which remains challenging in itself, that the negotiations on the Bilateral Trade agreement with the EU will be relaunched with a fresh round starting in Delhi from June 27 and targeting the closure by 2023 or latest by early 2024. It has also been decided to have three parallel tracks for Agreements on Trade; Stand alone Investment Protection Agreement; and Agreement on Geo-economic Indicators which is perhaps a more practical and better strategy compared with an all-encompassing one before. India -EU BTIA has been in the making for nearly 15 years when in 2013 the discussions were discontinued due to irreconcilable differences.

In April , apart from several Foreign Ministers and other leaders from Europe, the EU Commission President Ursula von der Leyen was in India to reiterate their commitment to strategic relations with India including an early start of the FTA negotiations that was already agreed to at the Porto Summit . Of course , India’s strategic autonomy in the ongoing Eurasian war remained a cause of concern but they would rather not see India aligned even more with Russia hence an inclusive approach has been adopted where both sides appear to have come down from the high horse of absolutes to a realistic position opening doors for negotiations in a more balanced, meaningful , predictable ,comprehensive and constructive manner since EU is India’s 3rd largest trading and the largest investment partner. The EU can hardly ignore the growing, even a difficult Indian market, as they predicate their engagement in accordance with the EU-India Roadmap 2025.

Challenges are plenty and protectionism remains an issue. Some of the key concerns were customs duties, high tariffs and Non-Tariff barriers , issues pertaining to automobiles and spirits , subsidies and of course movement of professionals and smoother access in the services sector.In addition , the digital transformation and e-commerce ,ICT and data protection issues remain areas of concern . Likewise, greenhouse gas emissions, civil nuclear energy , regulations and safeguards in financial sector trade controls and technology transfer especially greening the trade and economies and cooperation on sanctions and embargoes ( possibly against Russia) will be the challenges to be confronted by both sides.

EU and India have been on the opposing sides to the IPR waiver proposal at the WTO so that the developing world does not continue to suffer the obduracy and selfishness .But the fruits are sweeter as perceived by the objectives and outcomes of the trade deal which may help diversify and secure supply chains and create more opportunities for the businesses including through the EU’s flagship Global Gateway ( 2021-27) as Chinese BRI and hegemony expands and challenges the established principles and paradigms of international finance, trade and economy. One of India’s key concerns was the mobility for her professionals which have been addressed since the 13th Summit, when a Joint declaration for high level dialogue on Common Agenda on Migration and Mobility (CAMM) was adopted and instituted.

Although India has become a favorite destination and has received the highest ever FDI despite the pandemic, ongoing policy and regulatory reforms need to be expedited to keep India more attractive and competitive on the global scale as its Doing Business rankings improve. More importantly an honest SWOT analysis is imperative to ascertain the reasons for some MNCs and Indian businesses leaving the country to more attractive destinations. This would enable a clear assessment and solution that will also provide the requisite attractive framework for many others leaving China but looking for alternate destinations. India has not figured on their radar also averred by a Standing Committee report of the Parliament .

Although India has been averse to political alliance structures the economic linkages within a mutually beneficial framework provides it the requisite geo-economic heft as she tries to regain her comparative advantage through the reform, perform and transform which are the vectors engineering her Atmanirbhar ( Self reliance with a global footprint) quest . However, the EU’s invitation to India to be part of the Global Alliance on Circular Economy and Resource Efficiency is a welcome development. Putting the best foot forward by both sides might yield the true grit to overcome the complex challenges.

(Author is former Ambassador of India to Jordan, Libya and Malta. Views expressed are personal and do not reflect the official position or policy of Financial Express Online. Reproducing this content without permission is prohibited).