India-Russia talks “comprehensive and productive’’; S-400 to be discussed later this year

India-Russia talks “comprehensive and productive’’; S-400 to be discussed later this year 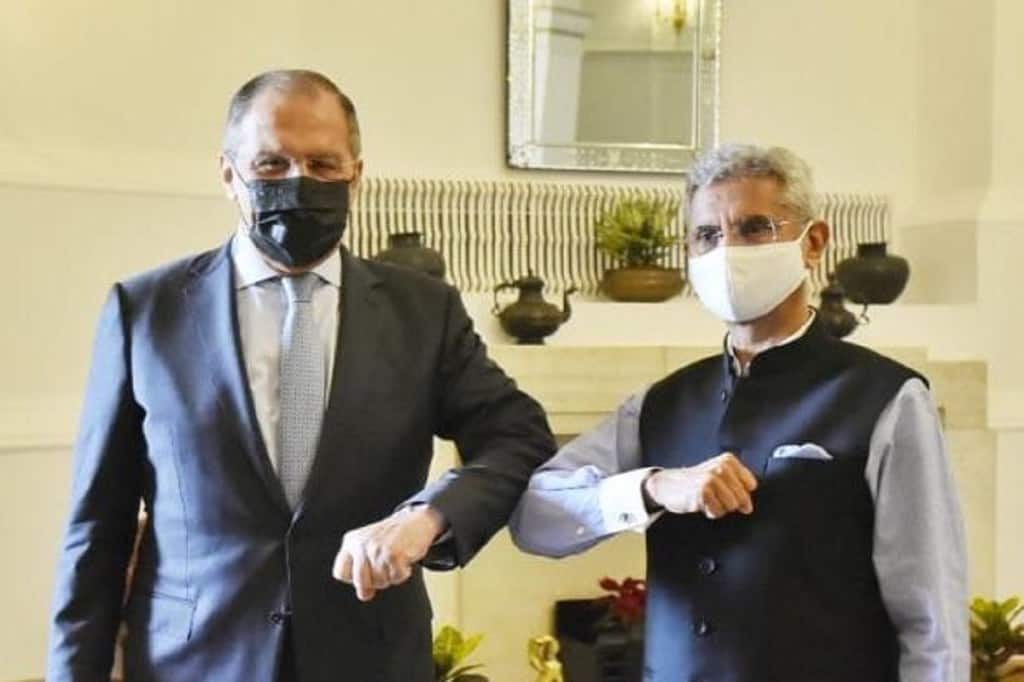 Post COVID, both India and Russia are in talks of deepening their vaccine cooperation. (Representational Image)

Top ministers of India and Russia met in New Delhi on Tuesday (April 6, 2021) and had wide range of discussion with focus on issues related to defence cooperation and weapons manufacturing, Afghanistan, partnership in nuclear, space and economic cooperation. An expected visit of the Russian President Vladimir Putin later this year for the annual summit as well as vaccine cooperation was discussed today.

Also Read
Is the mega military project to acquire 114 fighters for the IAF in jeopardy?
Apache for the Indian Army to land in 2024; will have indigenous fuselage!
Navy to get `VAGIR’ sub next week; no Air-independent Propulsion deployed
Wait is over! Production of legendary Kalashnikov AK-203 assault rifles start

The visiting Foreign minister of Russia echoed what external affairs minister has been saying on Indo-Pacific. “We are for inclusive cooperation that is for something, not against somebody”, Mr Lavrov said.

During the talks both sides shared their views on the Indo-Pacific.

Addressing a joint conference after the meeting, the Russian defence minister dismissed suggestions of any future military alliance between Russia and China.

Adding, “By the way, we have also heard speculation about pro-military alliances not only with reference to Russia and China relations, but have also heard about such alliances as Middle East-NATO, Asia-NATO.”

Both diplomats sidestepped questions which were related to the delivery of Moscow’s S-400 weapons system.

Responding to a query raised by the Indian sides, both minister responded by saying that the two countries have vowed to deepen military-technical cooperation.

According to the Russian minister “the statements from the US were not discussed. Instead we have confirmed that our military co-operations will be deepening.”

As has been reported in Financial Express Online last week, both India and Russia had in 2016 inked an agreement for the ‘Triumf’ interceptor-based missile system. This system is considered to be the best in the world and has the capability of destroying missiles, drones and even enemy aircraft up to a range of 400 km.

The trump administration in 2017 introduced the Countering America’s Adversaries Through Sanctions Act or CAATSA. This was a US federal law which was imposed on Iran, North Korea and Russia.

In the case of Russia, it meant sanctions on Russian interests including defence and security sector, oil and gas industry as well as the financial institutions.

And, since then the US side has been urging India not to buy the world’s best air defence system S-400, and other military platforms.

This is a deal which is worth USD 5 billion. And India’s consistent stand has been that the process for acquiring the Russian system had started much before CAATSA was imposed by the US and that it is not a UN law.

A team of military specialists are already in Moscow undertaking training for the S-400 Triumf ‘SA-21 Growler’ air defence systems. This system is the main pillar of the special and privileged strategic partnership between the two countries.

To the similar question if the S-400 was discussed, the Indian external affairs minister said that “Later in the year when the defence minister will meet, the S-400 will be discussed.”

The Russian minister in his opening remarks at the end of his meeting with Jaishankar told the media that the two countries are discussing the possibility of “additional” production of Russian military equipment in India.

Post COVID, both India and Russia are in talks of deepening their vaccine cooperation. Stage is set for the Indian regulatory body to clear the Russia-made Sputnik V corona virus vaccine for emergency use. This then will make available a third vaccine option for India which is witnessing an increase in the numbers of the Covid-19 infections.

Once approved, according to reports, this vaccine will be manufactured by Dr Reddy’s Laboratories Ltd. This is a two-dose vaccine and it needs to be stored in liquid form at or below -18 degree Celsius.

To a question Mr Lavrov said, “Without the participation of the of all political, ethnic and other groups in Afghanistan, the talks will not be durable.”

Why? Because, as the Russian minister stated, “The Taliban movement is part of Afghan society. And, for any settlement a balance of interests of all political, ethnic and religious groups should be reflected. And they should be represented in the governing structures.”

Today’s meeting between the two foreign ministers amidst the US pushing Afghan President Ashraf Ghani and the Taliban to reach a peace deal. Though there is a tension between the US and Moscow, the Russian side has been publicly backed the US proposal.

What is the US proposal?

The US wants to pull out 2500 soldiers from war torn Afghanistan. And, has proposed an interim government of national unity. This is expected to bringing together the Taliban and Afghan leaders.