According to government sources, “A feasibility study was conducted and it indicated having a FTA with EAEU is going to be favourable. The negotiations are expected to take off soon. Discussions have started. ” 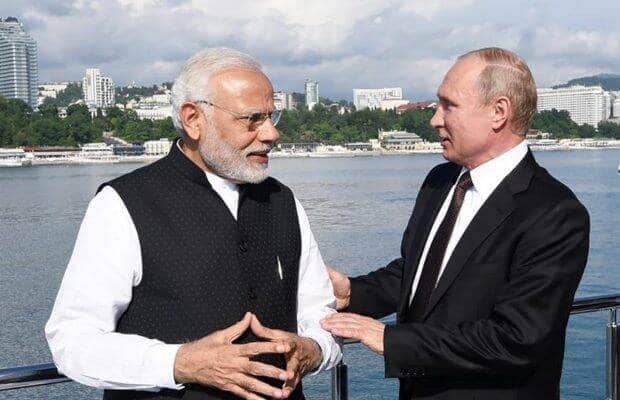 “If India doesn’t sign the deal, Russia would then be under pressure to negotiate deals with China. And that would be detrimental to both Russia and India,” he concludes. (PTI File image)

Member countries of EAEU include – Russia, Armenia, Belarus, Kazakhstan, and Kyrgyzstan, and the combined GDP is approximately USD 5 trillion. This was formed in 2015, and Russia is the biggest trade partner of India amongst the EAEU member nations. Both India and Russia have already reached their earlier target of bilateral trade of USD 30 billion and have now set a new target of USD 50 bn to be achieved by 2025.

According to government sources, “A feasibility study was conducted and it indicated having a FTA with EAEU is going to be favourable. The negotiations are expected to take off soon. Discussions have started. ”

Also Read
Agnipath Policy: Veterans weigh in whether it is laudable or laughable
Defence Ministry okays procurement of military platforms worth Rs 4,276 crore
Of all the strengths of the Indian Army, its culture is the foremost
Can new CDS Anil Chauhan execute Bipin Rawat’s Theater Command vision?

Once such an agreement is in place between India and EAEU, the bilateral trade is expected to be doubled. This FTA will help India get access to Iran, Afghanistan, the Central Asian region as well as Russia.

Eurasian Union has signed the FTA with several countries including Singapore, Vietnam, Iran, and Serbia. And negotiations with countries like Indonesia, the Philippines, Cambodia Thailand, and Brunei are in different stages. Russia is persuading India to sign the FTA with the Eurasian Union.

Should India have an FTA with Eurasian Union?

Yes. “India should seriously consider signing the FTA with the Eurasian Union. This bloc can provide access to a market of 183 million people with an estimated GDP of nearly 2 trillion dollars. These are middle income countries and Indian products are not unfamiliar there,” opines Prof Rajan Kumar, School of International Studies, JNU.

According to him, “The FTA with the Eurasian Union will have economic and also geo-strategic dividends. First, experts believe that several Indian companies have advantages over Russian and Central Asian companies. The prevalent economic atmosphere in India is fairly protectionist, but the business leaders may find the level of competition less intimidating compared to a Chinese competition.”

“China is in the midst of negotiating an FTA with the Eurasian Union, but prospects of tariff reduction are unlikely because Russia fears that Chinese products will swamp the Eurasian market. It does not have any such concerns with India. It can be a win-win situation for both the parties,” Prof Rajan says.

Second, “after India’s withdrawal from the RCEP, it would be imprudent to remain protectionist even from countries where companies are less competitive. The Eurasian Union can be an excellent bloc to test the viability of the FTA. Third, India has excellent relations with the countries of the Eurasian Union. It is easier to negotiate with these countries than with the RCEP or the European Union. India would be the biggest economy in the bloc and therefore it can play a decisive role in future negotiations. Finally, goodwill in trade will extend to security and connectivity projects in Eurasia.”

“If India doesn’t sign the deal, Russia would then be under pressure to negotiate deals with China. And that would be detrimental to both Russia and India,” he concludes.

Since India has pulled out of the RCEP FTA with Japan, South Korea, China, Australia, New Zealand, and the ASEAN nations, a deal with EAEU will help in gaining access to new markets and the Indian companies will not be harmed.

What can India sell to the EAEU?

From India the member countries would be keen to buy generic medicines, tea, coffee, agri products, fruits, raisins as well as herbs, spices and other products.