On Monday, the Indian Navy announced the arrival of three warships in Andhra Pradesh, Karnataka and Maharashtra and they will be delivering COVID-19 medical supplies. 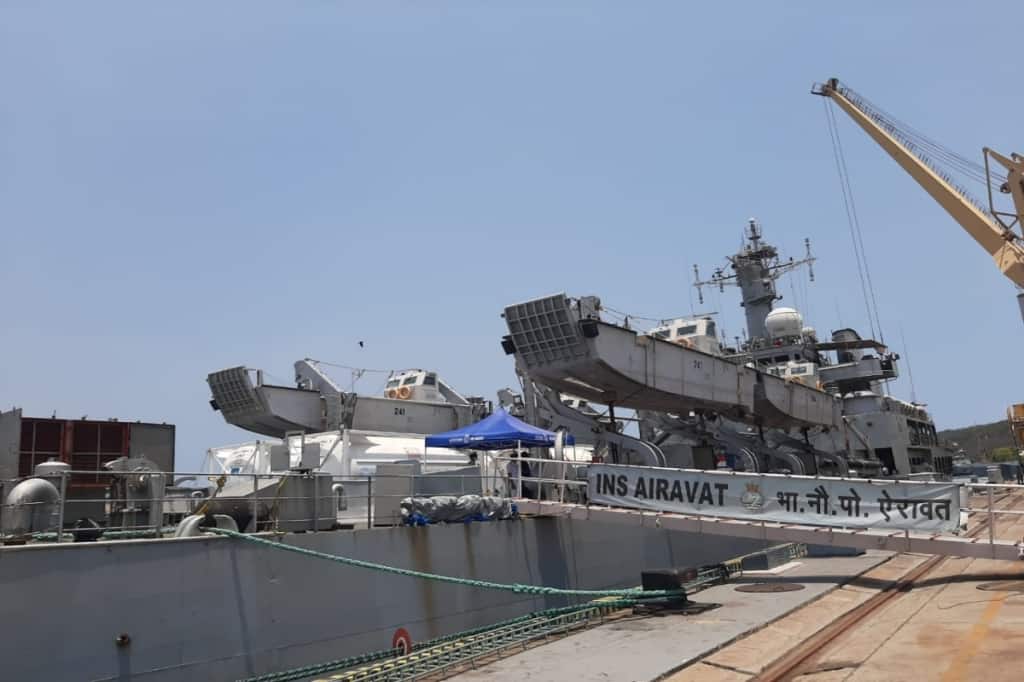 According to the IAF, since April 27, 2021, a COVID Air Support Management Cell (CASMC) is operational at Palam Air Base. (Image: IAF/Indian Navy/Embassy of South Korea)

On Monday, the Indian Navy announced the arrival of three warships in Andhra Pradesh, Karnataka and Maharashtra and they will be delivering COVID-19 medical supplies.

What are the supplies they are delivering?

Which warships are arriving?

INS Kolkata will be reaching New Mangalore, Karnataka with a consignment of 400 Oxygen cylinders and 47 Oxygen concentrators and two 27 MT Oxygen filled containers, from Qatar and Kuwait.

To support the country’s fight against the global pandemic, as part of the ongoing Op ‘Samudra Setu’ II, INS Airavat has arrived in Visakhapatnam from Singapore and has on board eight Cryogenic Oxygen Tanks and other critical COVID Medical Stores including 3898 Oxygen Cylinders. These tanks were sourced through various agencies and were done in coordination with the High Commission of India.

Consignments of medical supplies from South Korea, which has 230 oxygen concentrators, 200 oxygen cylinders with regulators and 100 negative pressure isolation stretchers arrived on Sunday and more will arrive on the next flight on May 12, 2021.

According to an official statement issued by the Embassy of South Korea in New Delhi, the 1st and 2nd consignments of medical items account for around 20 percent of the whole support plan the government of that country has announced. More supplies are expected to come.

Expressing hope that the aid from his country will help India in its fight against COVID-19, Shin Bongkil, Ambassador of the Republic of Korea to India said “The Korean government will continue to work closely with the Indian Government in responding to the unfolding challenges amid the COVID-19 pandemic”.

According to the IAF, since April 27, 2021, a COVID Air Support Management Cell (CASMC) is operational at Palam Air Base.

The primary task of the cell which is running round the clock is to coordinate in an efficient manner the distribution of all the relief aid coming from foreign countries.

To handle the surge operations, which according to the IAF include manpower, ground handling and loading equipment, resources have been coordinated. Also vehicles like flat top trailers and forklifts have been provided.

Since April 28, 2021, one C-130 and two AN-32 transport aircraft are operating at Palam — they are airlifting loads on very short notice to various locations across the country.

Recently there was a meeting with Delhi International Airport Limited (DIAL), Air India SATS and Air Force Movement Liaison Unit. The focus of the meeting was to help in streamlining custom and warehousing related issues.