India-China LAC issue: So, so you think you can tell

Without skirting around an inconvenient truth the stark reality is that China is far more powerful than us in economic and military terms; with a higher growth rate. 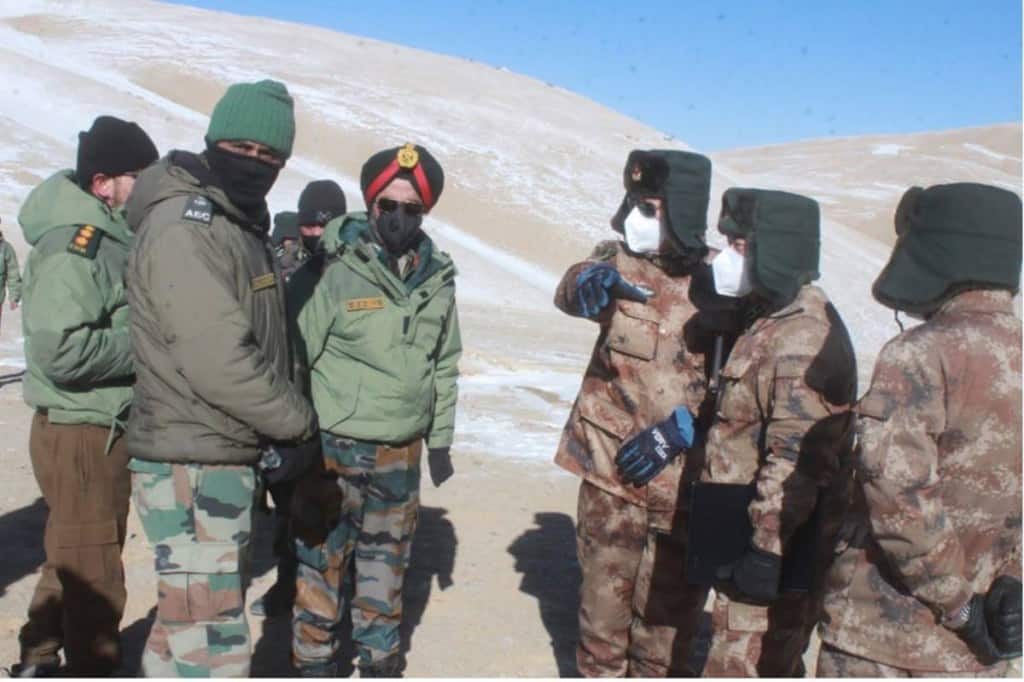 Both India and China are amongst the leading countries in the world as far as comprehensive national power is concerned. (Photo source: AP)

So, so you think you can tell’ are the opening words of an iconic song by the legendary band Pink Floyd. The recent agreement regarding the withdrawal of troops from the Northern and Southern banks of the Pangong Tso reached after ten months of a tense standoff and nine Corps Commander level talks with the Chinese have led to many opinions, including some warranting a clarification from the Ministry of Defence.

Without skirting around an inconvenient truth the stark reality is that China is far more powerful than us in economic and military terms; with a higher growth rate. This asymmetry is only going to widen. If we want to concentrate on the social and economic development of our nation we need to ‘bide our time’ and resolve the issue of our Northern borders. This issue that has dominated geo politics the world over recently is something that cannot continue to remain in the margins any longer.

While many analysts talk of the benefit of expanding the pressure in a horizontal manner, by being part of the QUAD, forging closer ties with the US and exploiting the maritime domain; as a nation the unvarnished fact is that as far as the continental battle space is concerned we fight alone. In addition, specifically in the 14 Corps Sector we have to face up to two adversaries simultaneously in some of the most inhospitable terrain in the world including the highest battlefield Siachen.

The other issue being flagged repeatedly is the experience and ability of our troops in mountain warfare and the Army’s ability to sustain them at these extreme heights where at times due to the rarefied atmosphere breathing is also an issue. While we should no doubt be proud of our capabilities and of the manner in which the Indian soldier carries and executes the burden of responsibilities on his shoulders, never complaining and ever willing for the ultimate sacrifice; most people are unaware of the nuances and manner of holding an IB (International Border), LoC (Line of Control), AGPL (Actual Ground Position Line) and the LAC (Line of Actual Control) all of which exist in this sector. The dynamics of holding each differ and their implications are fully understood by the troops on ground and Commanders responsible.

The last thing on the military commanders’ agenda is to convert the LAC into a LoC. The extent of the former is far longer than the latter and as they say “mountains eat up troops” so you are looking at a far greater commitment in terms of deployments which then need sustenance .Further, the inductions and de-inductions due to rotation of troops will require even a greater amount of infrastructure development. Though it is evident that such deployments will remain where criticalities exist. Conservation of forces and their consolidation is an imperative.

While the talks have been rightly been driven by the Army; these issues have been thought out in great detail. In addition the ground realities are extremely well known. Finger 4 and Finger 8 , may be part of the lexicon today but our troops have been occupying these areas for decades and Dan Singh Thapa Post and Sirijap have been occupied by Indian and Chinese troops since 1962.

Both India and China are amongst the leading countries in the world as far as comprehensive national power is concerned. Both countries are nuclear states and our armies have been engaged in a tense standoff within direct firing range of weapons. It is a matter of great maturity and restraint on the part of both neighbours not to have let this spiral out of control and engage in talks to arrive at an understanding.

While the talks may have been prolonged and at times it was felt that no breakthrough was in the offing; the mere fact that there was no breakdown was an achievement hence the criticism being levelled regarding the withdrawal seems to be unjustified or maybe it is due to a lack of comprehension or politico-military understanding.

The focus now must be to look in the future. Semantics have little relevance; so whether ‘status quo ante’ has been restored or whether ‘ both sides have agreed to fall back to their positions prior to May 2020 and not patrol the area between Fingers 4 & 8’ should not be seen in terms of victory or loss and ceding national territory.

While escalation is always an option the forces are prepared, equipped and trained for; disengagement and de- escalation are welcome. This is a positive step that needs to be embraced and we need to trust those responsible who were part of this lengthy negotiations. Disengagement is not like a switch which can be turned off and on to stop an action. Multiple steps constitute its implementation; locations to be vacated, timings, quantum of troops to be pulled out from rear areas, structures to be dismantled and removed and steps to prevent any incident are amongst some of the issues. It therefore needs to be phased and coordinated. There is also a monitoring and verification mechanism instituted which has been worked out.

To move ahead we need to erase a trust deficit that exists; in the recent past we have stood up in Doklam and now Eastern Ladakh, earlier we had stood up in Nathu La and Somdrung Chu. While what is well documented is the role of troops in contact, however during and after each such confrontation there are re deployments that take place including moving up of reserves both infantry and mechanised and additional firepower and other assets. Re orientation, re- prioritisation, re- calibration, re-balancing does take place when confronted with such situations. This is at times from within existing resources and later by additional raisings which take considerable time and are at a great cost to the exchequer. The spotlight from Pakistan has now shifted. As a nation we need to be aware of these realities.

Kailash Range is another area that has been in focus. No doubt we were in a position of strength, this occupation did turn the table and the withdrawal is being seen by some as a major concession from our side almost akin to giving up our trump card. This area is on our side of the LAC, we have not transgressed in any manner but we were not in occupation of these heights prior to April 2020. While the approach in the talks has been to resolve the issue sector wise, there are a large number of opinions regarding surrendering the tactical advantage as we were dominating the PLA Camp at Sumdo and had the advantage of monitoring any movement from the Spangur Gap towards Chushul. However, while we may be pulling back, the ability to monitor this area and the positioning of troops in the near vicinity to thwart any designs by our adversary remains. We will need to remain alert and agile. Further, this decision may be one amongst the principle reasons which have led to the agreement of withdrawal by China.

The bravery of the Indian soldier is unparalleled. At the same time their ability to operate in harsh conditions both in terms of weather and terrain with unwavering determination while ensuring the territorial integrity of the nation is unquestionable. It is this resolve which has backed the Army led talks and the mechanism now created for the Northern and Southern banks of Pangong Tso must further the agenda to discuss other friction points along the LAC namely; Depsang , Galwan , Gogra and Hot Springs.

This is a historic opportunity to resolve the contentious issues regarding the legacy issue of our borders with China. The various claim lines are well known in this Sector till the occupation of Tibet by China the three lines were the Johnson Line (1865), Johnson- Ardagh Line (1897) and the McCartney – MacDonald Line (1899). Thereafter there was the 1959 claim line proposed by Chou En- Lai, discussions on which took place in 1960, the 1962 line where the Chinese reached and subsequently unilaterally withdrew from or the LAC as existing in 1993. There is no doubt that there are differing perceptions regarding the LAC. As General Rakesh Sharma a former Corps Commander stated recently in a talk show that “the LAC as a concept keeps varying in the minds of the Chinese themselves” and General Pannu, also a former Corps Commander said “it is historically defending an undefined borderline”.

The fact is that today President Xi wields the power and is paramount; Prime Minister Modi has both the authority and majority and the Services have demonstrated that they have the resolve and capability to mobilise and sustain troops at these heights; hence with strong leadership existing in both countries it is imperative that this issue of unresolved borders be resolved. Existing protocols that have been weakened also need to be examined afresh and strengthened. Initially, we can focus on Eastern Ladakh and subsequently, an agreement needs to be reached on the McMahon line. The delineation and subsequent demarcation of the LAC will be a fitting tribute to the valour and sacrifice of our brave hearts. We need to work towards conflict resolution and this end state.

A key take away as a nation should be the clarity we have got on China and the confidence in dealing with them. There are however various contentious issues, which need to be resolved. Have we as a nation been focussed in the wrong direction?

We must also understand that the dynamics of various regions within Eastern Ladakh differ. So the template of what was achieved while occupying Kailash Range in terms of troops and time will differ from Depsang Plains. Similarly the options in Galwan are different from those on the Northern bank of Pangong Tso.

What has been clearly demonstrated is that as a nation we are not seeking conflict, while at the same time we have the ability and resolve to stand up for our territorial integrity and sovereignty .Avoidance of war is our strategy which has been achieved by our professionalism, deployments, deterrence and actions of our frontline troops.

The message has also been conveyed that LAC violations will affect diplomatic and economic relations. The aim is peace and tranquillity on our borders. However, to achieve this we need to continue to develop our infrastructure, enhance our ISR capability for adequate reactions, and enhance the capabilities of our Armed Forces, we cannot afford to delay the cycle of modernisation. As hindsight is easier than foresight time alone can tell ‘heaven from hell’ but all indicators point to the former.