Indian Navy warships which are reaching different ports on Monday to hoist the Indian Tricolour in the presence of the Indian diaspora and other top leadership and local representatives of the host country. 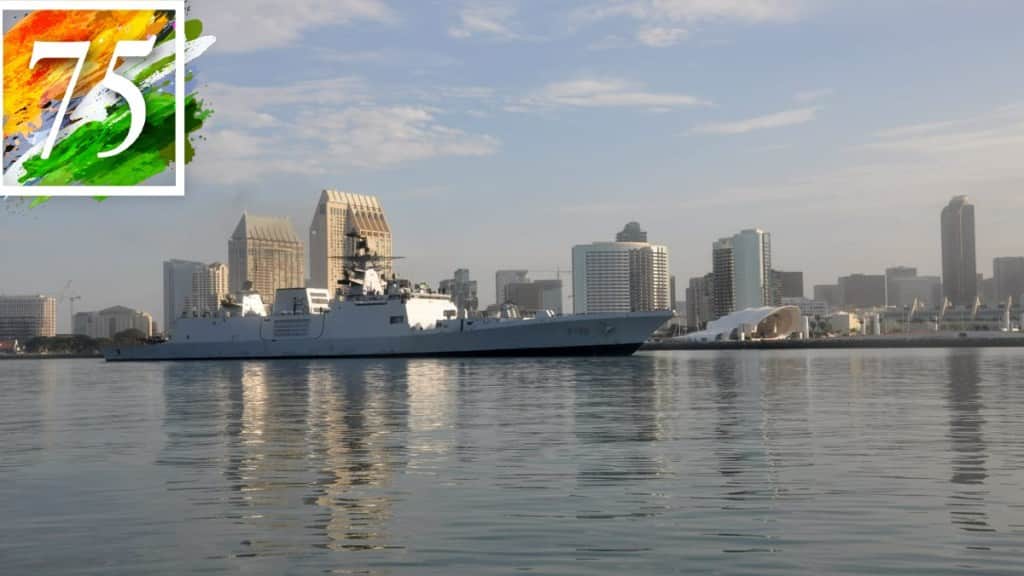 For the first time ever an Indian Navy ship has reached the west coast of North America. For the navy it was a historic day when on August 13 its warship INS Satpura arrived at San Diego Harbour North American Continent. The warship is there as part of commemorative visits being undertaken by the Indian Navy’s ships across six different time zones, three oceans, and six continents.

On this August 15, India is celebrating 75 years of Independence and the Indian Navy warships which are reaching different ports on Monday to hoist the Indian Tricolour in the presence of the Indian diaspora and other top leadership and local representatives of the host country.

On the historic 75th Independence Day, in the North American Continent at about 10,000 nautical miles away from her base port, according to the Indian Navy warship INS Satpura besides hoisting the Indian flag will also conduct a 75 lap “Azadi Ka Amrit Mahotsav Run” at San Diego US Navy Base.

Significance of each lap

The Indian Navy says that the 75 laps are dedicated to those 75 stalwarts for their sacrifices for the Independence of India.

This is the first time an Indian warship has travelled to North America. This has also demonstrated the capability of the Indian Navy to deploy across the globe when required.

INS Tarkash, a guided missile frigate has docked at Pier MAUÁ in Brazil. It will be there from August 13-16 to commemorate the 75th Anniversary of Indian Independence and the Bicentennial of Independence of Brazil in September. Several events have been organized by the Indian mission in Brazil and the Honorary Consulate General of India to include a guided tour of the frigate.

According to officials, in two decades this is the first visit of an Indian Navy ship to Brazil.

As reported by Financial Express Online earlier INS Tarkash is a Russian-class Krivak III Project 11356-class frigate. And it has been renamed the Talwar-class by the Indian Navy. There are three of these ships in the navy fleet.

The visit of the ship to Brazil also comes close on the heels of the scheduled visit of the external affairs minister to that country later in the coming week, where during talks with the top leadership, defence exports and deeper cooperation in various sectors will be on the agenda of talks.