IAF to get lethal Rafales: Laden with weapons, Air Force gets ready to receive Rafale fighters

These fighters will be based out of Ambala, Hasimara as well as the Gwalior Air Force station where the French Mirage are based. 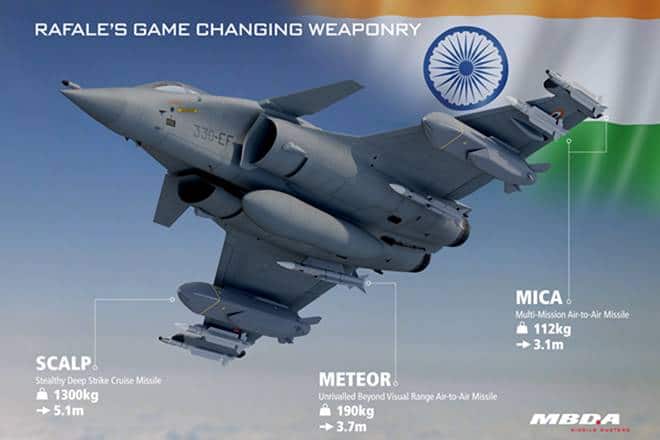 The potent set of weapons from MBDA are unrivalled by any of India’s neighbours. (Image Credit: MBDA)

The stage is getting set to welcome Rafale fighter aircraft for the Indian Air Force (IAF) later this month. These aircraft will be armed with game-changing weapons from MBDA and will help boost IAF’s air power in the Eastern and Western Borders. The potent set of weapons from MBDA are unrivalled by any of India’s neighbours.

So what weapons will Rafale have?

As has been reported by Financial Express Online earlier, the fighter jet will have the most famous Meteor beyond visual range (BVR) air-to-air missile. This is widely recognised as a game-changer for any air combat.

This missile is powered by a unique rocket-ramjet motor which will give more engine power and for much longer than any other missile.

What does it mean? It means that this missile can not only fly faster but have the ability to manoeuvre more than any other missile. Thus, it gives the Meteor missile the ability to chase down and destroy agile hostile fighters at further ranges. This means Meteor has a no-escape zone, much greater than any other air to air missile.

IAF will also get the SCALP deep-strike cruise missile from MBDA. This stealthy weapon has proven time and again in combats its ability to strike deep inside hostile territory at the protected targets, that too without the Rafale entering the hostile air space.

This is possible due to three operational key factors including high survivability due to its long stand-off range; low observability and sophisticated mission planning system; pinpoint terminal accuracy which is possible due to the highly accurate seeker and target recognition system and finally, the terminal effectiveness which is provided by the powerful tandem warhead and multiple detonation modes.

This weapon, IAF is already familiar with as it is part of the French Mirage 2000 aircraft. This is the only missile in the world which comes with two interoperable seekers (active radar and imaging infrared). This will cover a wide spectrum — close-in dogfight to long beyond visual range. And it has the capability to fly out to BVR in passive mode before the seeker locks on in the final stages of the end game. That is why it is known as the `silent killer’. Why? Because the target will have hardly any time to react or deploy effective countermeasures.

When are the Rafales coming?

End of July, these fighters from the French Dassault Aviation Company are arriving in India.

Ahead of their arrival, the top brass of the IAF will be meeting mid-week to discuss the operational situation along the Line of Actual Control (LAC). Sources have confirmed to Financial Express Online that “During the two days meet from July 22, the Air Chief RKS Bhadauria will be brainstorming with the chiefs of the seven commands. The focus will be operational preparedness in view of the Chinese belligerence along LAC.”

The IAF has been taking steps to ensure that all the fighters and the helicopters are ready and have been serviced to be deployed in there is an urgent need.

The Rafale which are coming later this month will be integrated with the other fleets of the IAF and will help in strengthening the combat potential of the IAF. “In view of the growing tensions between India and China along the LAC, these five aircraft which will come equipped with deadly weapons from MBDA will help the IAF in case there is a confrontation,” explained a senior IAF officer.

Though there is no confirmation whether five or six Rafale will arrive in India later this month, however, as per the plan these aircraft will land at the Ambala Air Force Station. And there is a possibility that long with three twin-seat and one single-seater, there could be two more, out of the 36 IAF has ordered.

These fighters will be based out of Ambala, Hasimara as well as the Gwalior Air Force station where the French Mirage are based.