The United States Air Force has stated that it has successfully tested a hypersonic weapon with a Mach 5 speed in March 2022. 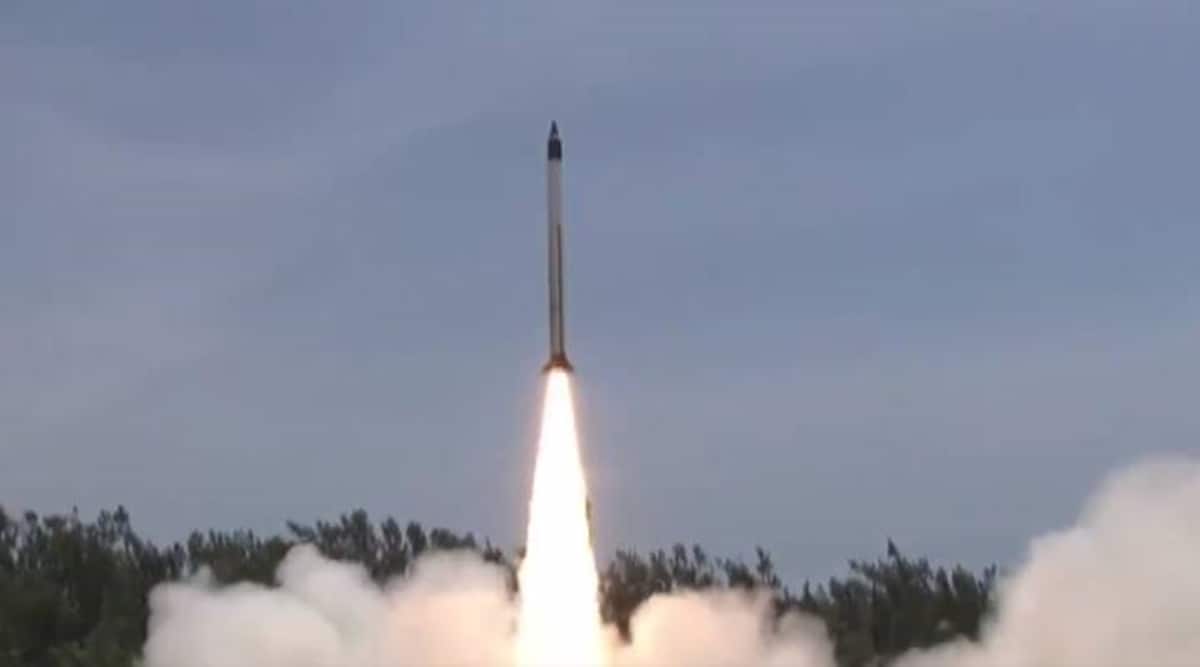 An unnamed source in the US military claimed that Russia has used hypersonic missiles multiple times in Ukraine. (IE)

When the world heard the claims of Russia test-firing the 3M22 Zircon hypersonic non-ballistic missile and its capabilities in the last week of May, America tried to pooh-pooh it. When Moscow said it had fired two hypersonic missiles in Ukraine, the Pentagon said it was not a “game changer”.

Still, a question popped up – whether India is also equipped with such a missile? Can India be quiet when the US, Russia, and China have already boasted of these advanced technologies? It has no choice but to join the race with next-generation weaponry. It is making preparations for the same.

Russia showed off its hypersonic missile Zircon to send a message to the West, in particular, America, that it can teach a lesson or two if it continues to fortify Ukraine with more weapons. It is also a message to the members of NATO that they are not in a safe zone. Of course, the test firing of the anti-ship hypersonic cruise missile, Zircon (also referred to as Tsirkon), did not come as a bolt from the blue because Vladimir Putin’s devious mindset is well known to the world. He is capable of using and also exhausting all possibilities to tame the West through Ukraine. One such test is the test-fire of the hypersonic missile. It is part of the experiment that has been going on since 2020.

It was reported in 2019 that the Russian Navy may accept the Zircon for service and deploy it on surface warships and submarines from 2023. But the timing of the latest test-fire is such that it sends a strong warning to those who are standing by Ukraine now. It also looks like Russia is trying to advance its deployment to the end of 2022. The TASS news agency of Russia has reported that the Admiral Golovko frigate would become the first to be armed full-time with the Zircon.

The Zircon missile is considered a lethal weapon that is being developed. It was launched in the Barents Sea in the Arctic, hitting a practice target in the White Sea, off Russia’s northwest coast. The distance it travelled was 1,000 km. To support the claims, a 30-second video was released along with a statement. Zircon is famed for being the world’s fastest non-ballistic missile. It can carry both a conventional and a nuclear warhead. These are the claims of Russia.

A hypersonic missile is supposed to travel at no less than Mach 5 or much higher. It means it travels five times faster than the speed of sound. Putin has claimed that the Zircon can fly on March 9 – nine times the speed of sound, covering a range of 1,000 km. In other words, the missiles can directly target the chosen destination from a long distance. On top of that, they can’t be intercepted by any current missile defence system, which is the claim by Russia.

Defence experts do believe that the Zircon is a highly expensive missile. Each one could cost around $210 million. No doubt, they can be used on battlefields like Ukraine to destroy underground targets. Such technically advanced missiles have higher penetration and damage as well as greater destructive power. Because of its maneuverable ability, it is almost impossible to track. Moscow’s stated aim is to empower its cruisers, submarines, and frigates with the Zircon. It may give a miss to even the most advanced aircraft in the world, such as the US’s Aegis Combat System, because of its super speed.

But can Russia afford to use such an expensive weapon now? This question arises because it is choked with too many western economic sanctions. Vladimir may not like to use missiles like rockets because a vast area of Ukraine has already been bombarded and people have dispersed.

The United States Air Force has stated that it has successfully tested a hypersonic weapon with a Mach 5 speed in March 2022. In August 2021, in China a test of a nuclear-capable hypersonic missile was conducted. It launched a rocket that carried a hypersonic glide vehicle that flew in low-orbit space, it has been reported.

In April, the AUKUS – an alliance between the US, UK, and Australia – announced plans to work together to develop hypersonic missiles. This is mainly to equip them to face China’s growing military power in the Pacific region. To the solace of the US, China recently made a vain bid to reach a consensus on a security pact among the 10 Pacific Island nations. President David Panuelo of the Federated States of Micronesia (FSM) said that China’s efforts may threaten to bring a new Cold War and World War.

So, the US, Russia, and China already have hypersonic missiles that cannot be intercepted by any current missile system. These countries are in a race to modernise their defence forces. An unnamed source in the US military claimed that Russia has used hypersonic missiles multiple times in Ukraine.

India might have lagged behind the US, China, and Russia when it comes to developing hypersonic missiles. But it is there. In September 2020, the Defence Research & Development Organisation (DRDO) successfully tested a Hypersonic Technology Demonstrated Vehicle (HSTDV). The country has developed its own cryogenic engine. It has adopted hypersonic air-breathing scramjet technology. To explain it in simple terms, air-breathing vehicles use air captured from the atmosphere to achieve sustained propulsion. A scramjet engine is an improvised version of the ramjet engine. While a scramjet operates at hypersonic speeds, a ramjet functions at supersonic speeds of around Mach 3.

In the HSTDV case, the cruise vehicle moved at a velocity of six times the speed of sound – that is, about 02 km/second for more than 20 seconds, according to the Ministry of Defence. It reached an altitude of over 30,000 ft in just about 20–22 seconds. With this indigenously-developed technology, India joined the league of the US, Russia, and China in possessing technology that can escape detection by interceptors.

America, China, Russia, North Korea, and India have demonstrated their “hypersonic missiles,” or at least they have claimed the abilities of the missiles. But are they hypersonic? No third-party endorsement has been done to assess the speed and maneuvering capabilities (both vertical and horizontal). When a missile’s speed exceeds Mach 5 (five times the speed of sound), then it is said to be at “hypersonic speed.” It is a difficult and costly technology because of the speed involved in it and the massive heat generated when it flies. While every country claims speed, maneuverability is not being discussed. All countries have controlled or opaque features on their hypersonic missiles. Barring the scientific community and aviation technical experts, it is difficult for others to understand the real strength of the missiles.

When Russia claimed that it destroyed a Ukrainian ammunition depot with hypersonic missiles, the West debunked the claims, saying they were nothing but hypersonic hype. Russia has claimed that its missiles can fly five to 25 times the speed of sound. Defence experts have wondered why such super-sophisticated ammunition is required to destroy a building from a short range. It is more of Putin’s bragging about his military strength to the world, it was said. Why is the conflict still ongoing if the most advanced missiles have been used against Ukraine?

For now, many of the pertinent questions remain so for now because the arms race is on. More than logic, it is fear that is working. Defence Minister Rajnath Singh in December 2021 directed the DRDO to fast-track arsenal manufacturing. It may take at least four to five years to get the hypersonic missiles on board. Singh hopes that developing hypersonic cruise missiles will be a revolutionary step in India’s defence sector. During the HSTDV test fire, the speed was at Mach 6 and travelled for just 23 seconds, while America and Russia are talking about Mach 9 speed. The ramjet-powered BrahMos supersonic cruise missiles of the Indian armed forces fly at Mach 2.6 speed. This is India’s joint venture with Russia. India has a long way to go before it can say confidently that its indigenously designed hypersonic missiles can make space for itself in the arms race. It is a constant quest, pressure, and investment of huge money to come up with missiles with enhanced abilities.

(The author is Aerospace & Defence Analyst. Views expressed are personal and do not reflect the official position or policy of Financial Express Online. Reproducing this content without permission is prohibited).