All the members including China are important because of the grouping’s consensus-based approach, as there can be no talk about the indebtedness of states without China being part of it. 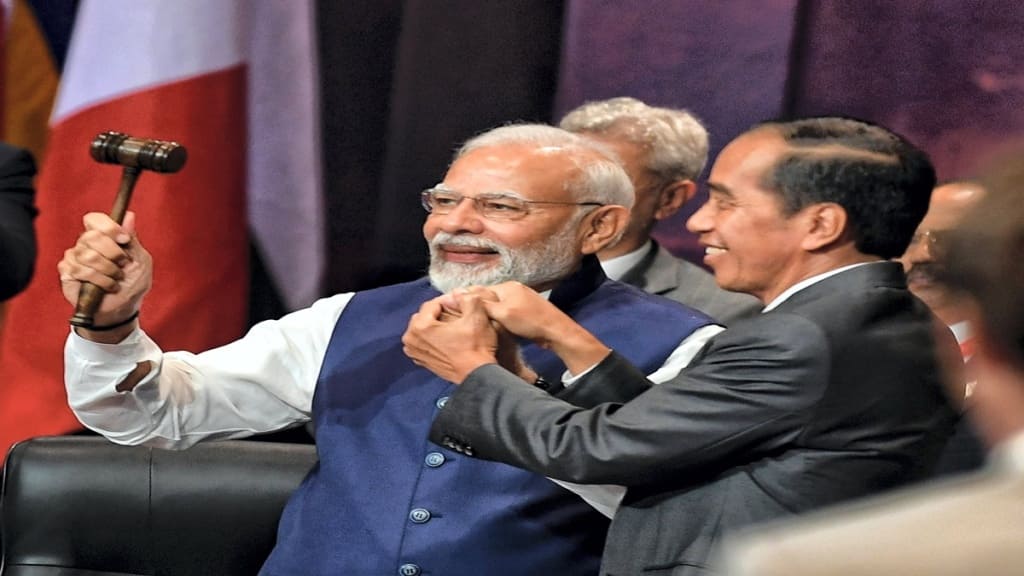 Earlier this month at the end of G20 Bali Summit, Indonesian President Joko Widodo had symbolically handed over the G20 presidency to Prime Minister Narendra Modi.

On December 1, 2022, India will officially take over the presidency of the G20 which is set to be marked by several events across the country including the lighting of 100 monuments with the G20 logo.

Over the next few months there will be a ‘University Connect’ event which will bring together students of some 75 universities. This is being planned in order to involve the youth and there will be radio jingles, videos will be released as well as messages from top leaders such as external affairs minister S Jaishankar.

Earlier this month at the end of G20 Bali Summit, Indonesian President Joko Widodo had symbolically handed over the G20 presidency to Prime Minister Narendra Modi.

What will be the focus?

‘One Earth, One Family, One Future’ is the theme under India’s G20 presidency which highlights the importance of having an approach that unites the world to address the future. And to meet expectations of developing countries to global challenges like climate change.

Prime Minister Narendra Modi in his address on the closing day of the Bali Summit had said that India’s presidency will be “inclusive, ambitious, decisive and action-oriented”.

Also Read: G20 and India: Time to leverage and boost its soft power

Also to tackle these issues the grouping will engage with all member countries including China which is presently engaged in a border standoff with India for more than two years and seven months, as the grouping of the world’s largest economies is consensus driven.

The grouping has a structured agenda and counter-terrorism remains a very critical issue for India and this will be raised during the meeting of the foreign ministers of G20.

On Finance: the focus under India’s presidency will be on ensuring resilient and inclusive growth following the global impacts of not only the COVID-19 pandemic but also the ongoing Russia-Ukraine war.

At a time when the Global South is expecting the grouping to respond to the global issues, India will focus on unity and not divisiveness. The level of unity, according to people who are close to the matter that can address the challenging and pressing issues will help to keep divisiveness to a minimum level.

It means that India will seek to act as a bridge between countries which are divided over the Ukraine conflict so that the G20 can tackle bigger issues including: reviving the momentum to achieve sustainable development goals (SDGs), economic growth, climate change and most importantly indebtedness of countries.

All the members including China are important because of the grouping’s consensus-based approach, as there can be no talk about the indebtedness of states without China being part of it.

“China is the world’s second largest economy and is crucial for supply chains,” said the person quoted above.

The people cited the problems experienced by certain countries in the neighbourhood who are facing hardship since the pandemic and were reliant on external debts.

The focus under India’s presidency will be to work for reforms of multilateral institutions such as the Bretton Woods institutions, International Monetary Fund (IMF) and World Bank.  As the current mandate does not equip them to respond to contemporary challenges which include providing financing for climate action, raising more finances through the private sector.

Venues for the meetings across the country?

On the calendar there are around 200 meetings before the summit takes place in September 2023. There is a possibility of hosting in locations including Arunachal Pradesh, Kashmir, and Ladakh is in the process of being worked out.