Despite the constraints posed by post-pandemic challenges, there has been a marked increase in the flurry of visits and engagement between India and Africa. In just 2021, there were at least 22 engagements between India and Africa including bilateral visits at the level of External Affairs Minister (EAM) and Minister of State (MoS) for External Affairs, routine foreign office consultations, virtual meetings and phone calls at the level of Prime Minister and other such diplomatic events. 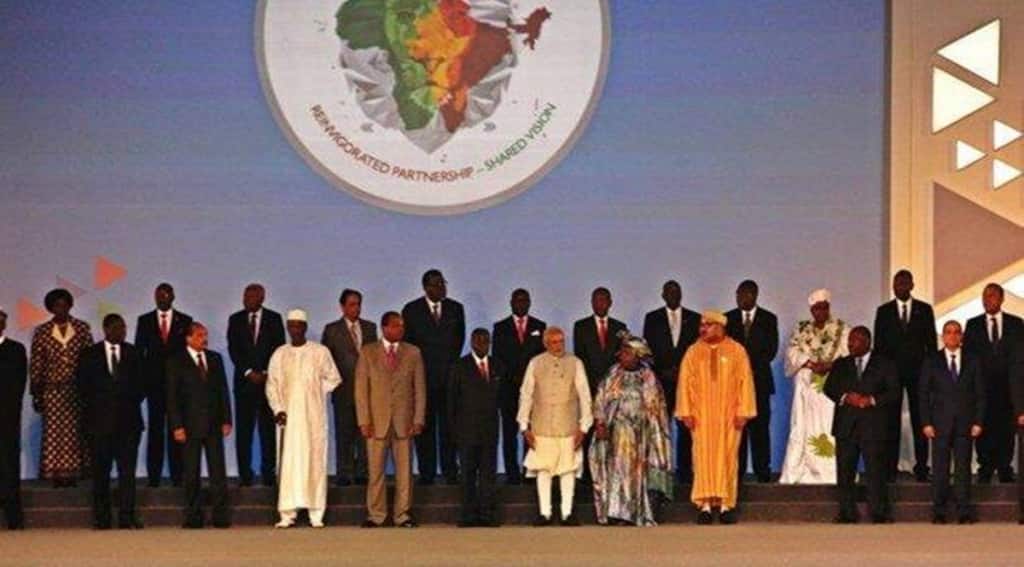 India and Africa’s partnership has been solidifying in recent years. Both sides have mutually intensified and diversified the areas of their engagement. With several dynamics altering in the international scenario, besides understanding the extent of this increased engagement, it would be interesting to examine the factors and trends underlying the growing bonhomie between the African continent and India. Whether it is a natural ascent in ties or whether external factors are driving the shift?

Despite the constraints posed by post-pandemic challenges, there has been a marked increase in the flurry of visits and engagement between India and Africa. In just 2021, there were at least 22 engagements between India and Africa including bilateral visits at the level of External Affairs Minister (EAM) and Minister of State (MoS) for External Affairs, routine foreign office consultations, virtual meetings and phone calls at the level of Prime Minister and other such diplomatic events.

The African countries engaged by India in 2021 are diverse and range across the continent such as Ghana, The Gambia, Senegal, Guinea Bissau from western Africa; Algeria and Tunisia from northern Africa; Sudan, South Sudan, Eritrea, Ethiopia, Kenya, Uganda, Rwanda, Seychelles, Madagascar and Mauritius from eastern Africa; and Botswana, Zimbabwe and South Africa from southern Africa. Evidently, there is an active shift in India’s Africa policy which underscores Africa as a priority in its foreign policy calculus.

Alternatively, Africa too has shown interest in cementing its ties with India. There were high-level visits from Africa to India such as, for instance, the visits by Foreign Ministers of Eritrea and Ethiopia to India in 2021. The trend has continued well into 2022, with significant visits like our EAM’s engagement with several African countries at the 26th CommonWealth Heads of Government Meeting (CHOGM) held in Kigali, Rwanda; the visit of former Vice President Venkaiah Naidu to various African countries; and likewise, the visits by African counterparts and participation of African high-level officials including foreign ministers at the Raisina Dialogue.

India and Africa share close historical natural ties. The partnership has expanded to include new areas like renewable energy, health and others. Both sides are mutually invested and interested in their growing bonhomie. As countries entwined in South-South Cooperation, perhaps the shared growth stories of development, economic progress, young demography, fraternity among various ethnic diversities, shared language like English, and availability of natural resources binds them together.

The toolkit for India’s engagement with Africa is the ten guiding principles outlined by Prime Minister Narendra Modi in his address to the Ugandan parliament in July 2018. India has made it clear that ‘Africa’s priorities are our priorities’ and has extended a plethora of human capacity building initiatives and infrastructure development projects amongst others that are tailor-made to each of these countries. India has significantly improved its engagement with Africa at the bilateral, regional and multilateral levels.

Complementarily, Africa too has reciprocated these interests. It is noteworthy that the India-Africa Forum Summits (IAFS) that has provided a structure and accelerated the India-Africa development partnership was initiated by the African Union (AU) in 2006 when Prof. Alpha Oumar Konare, the Chairperson of the Commission of the AU paid an official visit to India and conveyed the organisation’s desire to expand Africa’s relations with India and proposed an AU-India Summit.

African countries see India as a strong partner for transforming the continent and fulfilling Agenda 2063, which is Africa’s master plan for transforming the continent into a global powerhouse. India too has stated on several occasions that it seeks to support Africa in fulfilling the vision and aspirations envisaged in Agenda 2063. Being one of the top ten investors in Africa, vaccine suppliers during the pandemic and the first responders to crisis calls on multiple occasions, India is invested in the Africa growth story and its cooperation is based on a collaborative and consultative process.

At the outset it is evident that India and Africa see mutual benefits in cementing their ties. Besides this, a few other underlying currents act as push factors to strengthen this political willingness. Foremost is the growing profile of India as well as that of a few African countries on the international platform. Some of them have improved to occupy the ranks of emerging economies and portray strong positioning on international issues.

Despite the tremendous political and security stressors that the continent is facing, it is also flourishing to a large extent in some sectors. Another is the presence of different major powers and contrasting alliances in the African continent. Africa in general has begun engaging with multiple powers and India is among them. It has been perceived that perhaps China’s economic policy including its debt traps have pushed African countries towards India.

It could be so to a certain extent. There is indeed a difference between the economic models of development projects offered by China and India. While China does not prioritise providing labour to the local population and brings in its own workforce to execute its projects; India has made it a priority to employ the local populace in the execution of its projects. It can be observed that as China’s presence increases in the continent, the local discourse is that African countries need to become cautious of their dependency on it. This is supported by recent cases such as Sri Lanka.

On the other hand, India’s efforts to increase its presence in Africa has been embraced and reciprocated rather than viewed as something to be wary of. With the recent trajectory of events and India’s steadfast commitment to its principles, it can be assured that India would carry this weight on its shoulders perfectly well.

External factors have played a role in pushing Africa towards India and vice versa. However, these factors have only had the effect of accelerating what was already on the move. The increased engagement between the two has taken a natural trajectory of bilateral partnerships growing stronger with time.

Especially in partnerships like these where the foundation is strongly rooted in a shared sense of history, colonial struggle and south-south cooperation; efforts like IAFS, increase in India’s own capability and its proactive role as a development partner and Africa’s own interest to engage with India have been important driving factors.

It is true that in International relations there are no permanent allies or foes, only permanent interests. However, between India and Africa the bonhomie is slated to only improve and solidify over the upcoming decades as they have shared interests and values on all dynamics shaping International Relations – be it international norms, the world order, economic outlook, political environments, multilateral engagements, reform of global systems and actions against climate change among others.