During his visit from Dec 15-17, President Kovind will participate in Victory Day celebrations marking fifty years since Bangladesh formed a separate nation by defeating Pakistan. 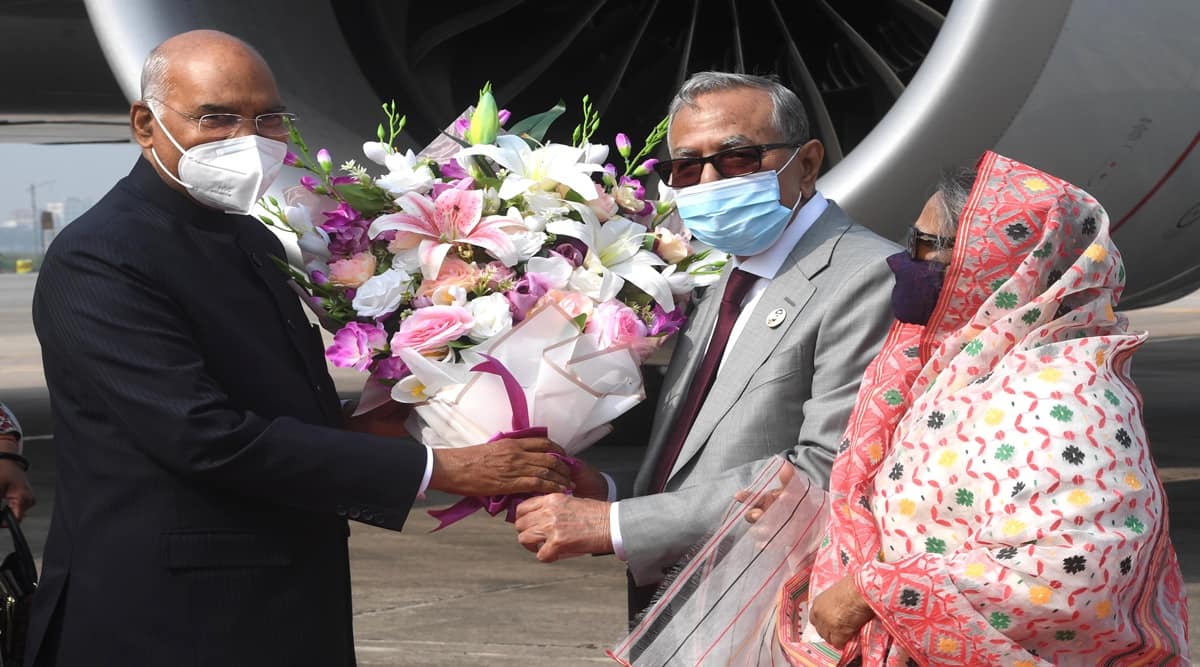 Bangladesh will receive a T-55 tank and a Mig-29 fighter jet used during the Liberation War. These will be handed over by President Kovind to his counterpart President Hamid and will be showcased at the National Museum there. (Twitter image)

In his first foreign visit since the pandemic struck in early 2020, President Ram Nath Kovind reached Bangladesh on Wednesday.

During his visit from Dec 15-17, President Kovind will participate in Victory Day celebrations marking fifty years since Bangladesh formed a separate nation by defeating Pakistan.

Briefing the media persons ahead of the visit, Indian foreign secretary Harsh Shringla said that the invitation for the Golden Jubilee of Bangladesh’s independence has been extended by Bangladesh President Mohd Abdul Hamid to President Kovind.

The President who is the only foreign dignitary to the event is accompanied by his wife and daughter and also minister Subhas Sarkar and MP Rajdeep Roy.

“It is of great historical significance and it also marks fifty years of the establishment of diplomatic relations between our two countries,” said the foreign secretary.

Adding, “Bangladesh is the pillar of our ‘neighbourhood first’ policy and intersects with our ‘Act East’ policy.”

Before travelling to the National Martyr’s Memorial in Sarvar, President Kovind was welcomed by Bangladesh President Hamid at the Hazrat Shahjalal International Airport.

Bangladesh’s Prime Minister Sheikh Hasina called on him at a hotel and in the evening he will meet President Hamid at the Bangabhaban.

On Thursday (December 16, 2021), President Kovind will reach the National Parade Ground. He is the guest of honour during a special event which has been organised to commemorate the 50th Victory Day of Bangladesh. Also on the programme of the visit, according to the foreign secretary the President is scheduled to take part in another ceremony at the National Parliament’s South Plaza.

On Friday, before returning to India, he will inaugurate and inspect the newly renovated section of the ‘Kali Mondir’ at Ramna in Dhaka.

And is expected to exchange views with the members of the relevant committee of the temple.

US excludes Bangladesh from Summit for Democracy

Recently, the US kept Bangladesh out of the summit over allegations of large-scale human rights abuse; it has imposed sanctions on seven current and former officials of Bangladesh’s Rapid Action Battalion (RAB).

Responding to a query related to these two developments, the foreign secretary Harsh Shringla said, “We normally do not comment on relations with third countries and the focus is on bilateral relations.”

According to foreign minister AK Abdul Momen of Bangladesh, “The relations between the two countries are not just about borders.”

India’s unwavering support in the War of Independence of Bangladesh in 1971 has laid the foundation of relations between the two countries.

Bangladesh will receive a T-55 tank and a Mig-29 fighter jet used during the Liberation War. These will be handed over by President Kovind to his counterpart President Hamid and will be showcased at the National Museum there.

A delegation of Indian war veterans who had fought in the War of Liberation are also accompanying the president.

Bangladesh is the biggest recipient of COVID-19 vaccines

According to the foreign secretary, the neighbouring country has received 2 crore 18 lakh doses of Made in India vaccines. Out of these, while 33 lakh have been gifted, 1.5 crores have been extended on commercial basis and 35 lakh under COVAX facility.

India has made significant deliveries to Bangladesh recently after the resumption of exports of vaccines, thus playing a critical role in combating COVID-19.