In a joint statement, the Group of Seven (G7), an inter-governmental political grouping, acknowledged the importance of national laws and regulations that are in place in each country to advance the principles and values of democracy. 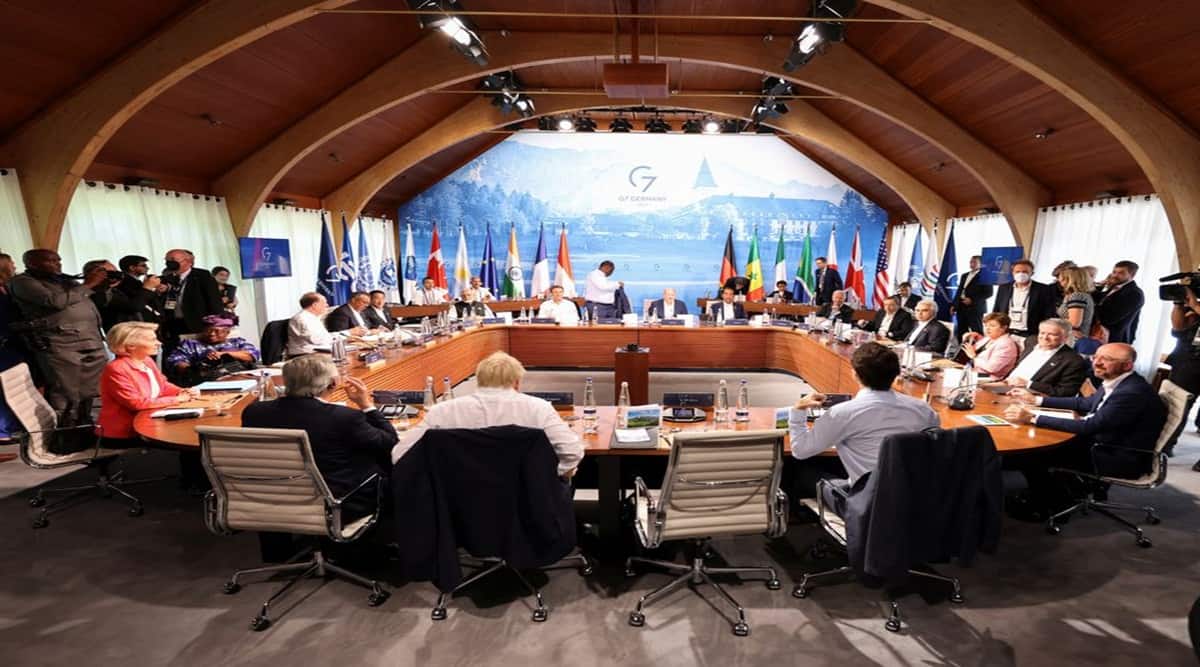 A general view of G7 leaders meeting with outreach guests for the working session of the G7 leaders' summit at the Bavarian resort of Schloss Elmau, near Garmisch-Partenkirchen, Germany, June 27, 2022. (Photo source: Reuters)

Leaders of the G7 grouping and its five partner countries, including India, have said that they seek to promote a rules-based international order, respect other states’ territorial integrity and sovereignty and defend the principles enshrined in the UN Charter, amidst China flexing its muscles in the strategically vital Indo-Pacific region.

In a joint statement, the Group of Seven (G7), an inter-governmental political grouping, acknowledged the importance of national laws and regulations that are in place in each country to advance the principles and values of democracy. “We, the Leaders of Germany, Argentina, Canada, France, India, Indonesia, Italy, Japan, Senegal, South Africa, the UK, the US and the EU affirm our commitment to strengthening the resilience of our democracies and to working towards equitable, inclusive and sustainable solutions to global challenges, including climate change and the COVID-19 pandemic, and reaffirm our commitment to the rules-based international order,” it said on Monday.

It took note of the 2021 Carbis Bay Open Societies Statement and recognised the “dramatic changes” in the geopolitical situation since then and the significant threats to democratic systems around the world.“We remain steadfast in our commitment to defending peace, human rights, the rule of law, human security and gender equality, as recognised by international law, including the United Nations Charter, and call on our international partners to join us in these efforts,” the statement said.

“We hail all courageous defenders of democratic systems that stand against oppression and violence, and will step up international cooperation to improve the resilience of democratic societies globally.“We commit to engage with partners internationally for peace and prosperity, and will work for progress towards an equitable world because we are stronger together,” it said.

It said that G7 seeks to promote a rules-based international order, respect other states’ territorial integrity and sovereignty, respect and defend the principles enshrined in the UN Charter, support the peaceful resolution of conflicts, oppose the threat or use of force of any kind that is not in compliance with international law, protect human rights, strengthen multilateral institutions to address global challenges, and develop and use technologies in accordance with democratic principles for the benefit of humanity.

The statement assumes significance amidst aggressive moves by China in the Indo-Pacific region as well as Russia’s invasion of Ukraine.The US, India and several other world powers have been talking about the need to ensure a free, open and thriving Indo-Pacific in the backdrop of China’s aggressive military manoeuvring in the region.China also claims nearly all of the disputed South China Sea, though Taiwan, the Philippines, Brunei, Malaysia and Vietnam all claim parts of it.

“In sharing these values, we are stronger together and commit to supporting democracy worldwide and free and fair elections, including through electoral assistance; in the spirit of partnership fighting climate change, preventing environmental degradation and loss of biodiversity, mobilising climate finance and supporting a just, equitable and socially inclusive transformation agenda, ensuring an orderly fair and equitable energy transition, taking into account energy security, national development priorities, viable and affordable technologies,” the G7 said.

The G7 grouping said it is committed to supporting efforts to push for sustainable solutions to mounting global sovereign debt, in particular within the G20 Common Framework for Debt Treatments beyond the Debt Service Suspension Initiative for debtors in need, while continuing to explore further solutions for vulnerable countries, including Middle-Income Countries.

The Group of Seven (G7) is an inter-governmental political grouping consisting of Canada, France, Germany, Italy, Japan, the UK and the US. Besides India, Germany, the host of the G7 Summit, had also invited Argentina, Indonesia, Senegal and South Africa as guests for the summit to recognise the democracies of the global south as its partners.