G20 Summit 2023 in Kashmir? ‘Any objection By China, Pakistan needs to be strongly contested’ 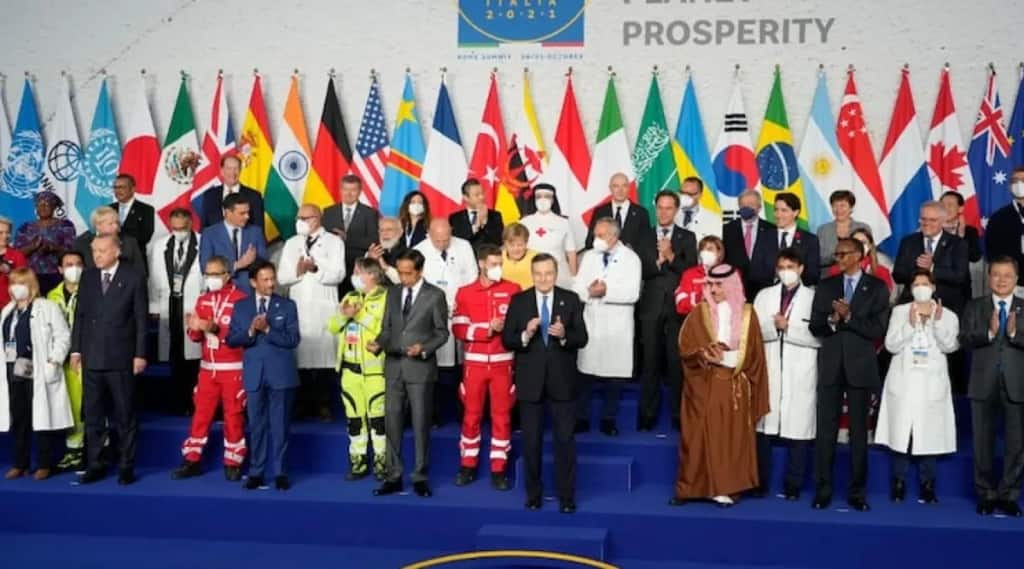 India will take over Presidency of G20 Presidency on December 1, 2022, from Indonesia, and will convene the G20 Leaders’ Summit for the first time in India in 2023. (File photo: AP)

The leaders of G-20 countries are scheduled to meet in Kashmir in 2023, and all eyes are focused on New Delhi, which by displaying a more assertive and independent role in international affairs and foreign policy matters, has transformed and made India’s diplomatic approach more proactive.

Readers, would recall that in 2017,  Prime Minister Narendra Modi’s remarkable persuasive skills coupled with New Delhi’s deft diplomacy saw insertion an anti-terrorism objective for G-20 countries. Consequently, the final communiqué read, “Terrorism is a global scourge that must be fought and terrorist safe havens eliminated in every part of the world”.

What makes this achievement even more stupendous is the fact that despite Beijing’s efforts to scuttle this move in order to protect its ‘all weather friend’ Pakistan, New Delhi was still able to prevail. With G20 leaders pledging joint crackdown on terrorism and its financing, as well as vowing to destroy terrorist safe havens in every part of the world, Pakistan with its long history has rightfully come under global scrutiny.

While Modi’s detractors may contend that nothing meaningful has come out of this, there is no doubt this puts Beijing in a tight spot. In fact, it was the diplomatic pressure to act on the G20 anti-terrorism clause that actually compelled China to relent and end the blocking UNSC Sanctions Committee recommendation of declaring Jaish-e-Mohammad founder and Pulwama attack mastermind Masood Azar a Global terrorist in 2019.

India will take over Presidency of G20 Presidency on December 1, 2022, from Indonesia, and will convene the G20 Leaders’ Summit for the first time in India in 2023.The G20 meet will J&K’s first major event since the revocation of the former state’s special status in 2019, and giving this international event the due importance that it deserves, the J&K government has formed a 5-member committee for the overall coordination of this meet.

Many feel that due to ongoing militancy in Kashmir, holding the G20 summit here is not advisable. However, the flip side is that holding this meet here will dispel many myths and fallacies being peddled by Pakistan. It will also enable G20 leaders to have first-hand information and personal feel about Kashmir. No wonder Pakistan has vehemently objected to this move, and expectedly, China is supporting Islamabad’s stand and even approached Saudi Arabia and Turkey to thwart India’s move   . However, Islamabad’s objection to the G20 summit being held in Kashmir has no legal or even moral standing and as such is a non-issue for the international community!

As Pakistan isn’t a member of G20 and has no worthwhile influence in the international arena, China is its only hope for scuttling the holding of G20 summit in Kashmir. Beijing is well aware that being unsustainable, Pakistan’s objections won’t find any meaningful traction within the G20 countries, but then since Islamabad has virtually become China’s fiefdom, it has no other option but to humour Pakistan. So, knowing fully well that its objection will fall on deaf ears, Beijing has nevertheless backed Islamabad, just as it had done when New Delhi abrogated Article 370 of the Indian Constitution.

Once the 2023 G20 summit is done and dusted with, both China and Pak are bound to end up with egg on their face. However, this doesn’t matter much to both- for Beijing this diplomatic rebuff is a small price to pay for humouring Pakistan which it’s exploiting to the hilt through the CPEC programme. As far as Islamabad is concerned, it has mastered the art of cherry picking and creating magnificent delusions, just like it did post Article 370 abrogation by calling informal UNSC meets a big victory, even when no resolutions or even a communiqué were issued after its termination and its demand that Article 370 abrogation should be revoked by New Delhi was completely ignored.

Any objection to New Delhi’s intention of holding G20 Summit 2023 in Kashmir on the grounds that it’s ‘disputed territory’ needs to be strongly contested and this shouldn’t be difficult at all. When China can make an investment in Pakistan Occupied Kashmir (PoK) through CPEC, then why can’t India hold an international summit in Kashmir? New Delhi’s decision to hold G20 Summit 2023 in J&K is a diplomatic masterstroke that needs to be complimented!

(The author is Editor of Brighter Kashmir, Author, TV commentator, political analyst and columnist. Views expressed are personal and do not reflect the official position or policy of Financial Express Online. Reproducing this content without permission is prohibited).