The Naval diplomacy being displayed by India is an indicator of this shaping dynamics in the Indo-Pacific. 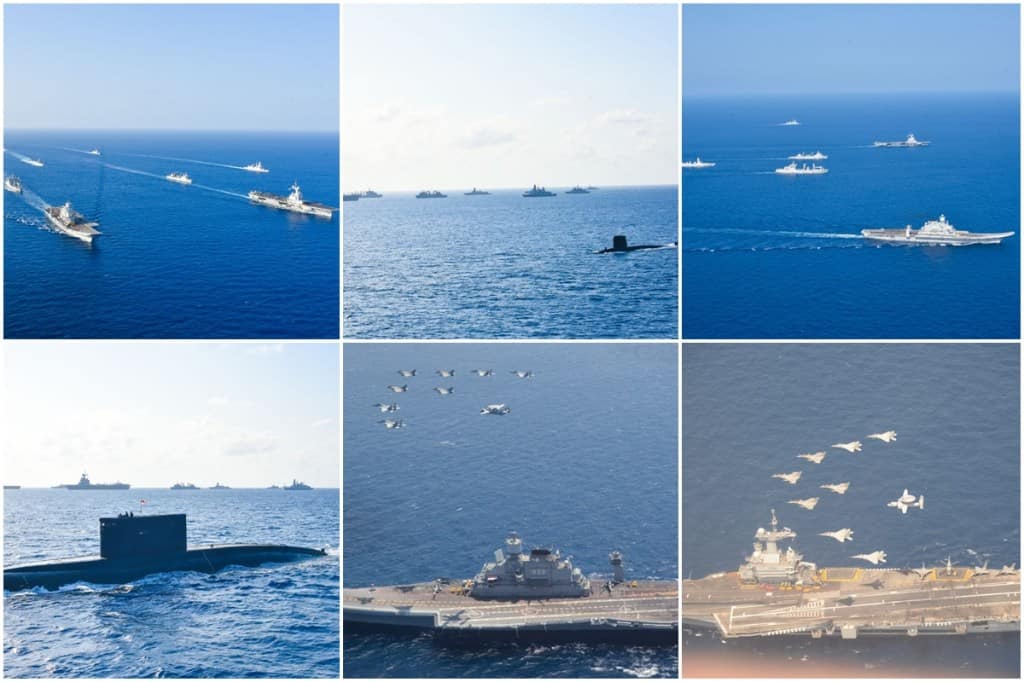 Indian Navy has always maintained a tactical advantage over the IOR to ensure compliance to the internationally established Rules of the Road (ROR) for the seas. (REPRESENTATIONAL IMAGES — Ex VARUNA 2019)

It is for the first time that Indian warships shall be participating in La Perouse exercise, and this now completes the QUAD force representation in the French led naval exercise. Previously in 2019, La Perouse exercise saw the participation of the US, Japanese and Australia to showcase their common goal of maritime security in the Indian Ocean and Asia-Pacific region. During the exercise, the US, Japan and Australia had deployed Destroyers, Frigates and submarines as part of the French Aircraft Carrier Task Group.

The role of the QUAD navies in the IOR (Indian Ocean Region) has been well illustrated by the effective cooperative engagement capabilities of the multi-national Naval powers through naval exercises like formation sailing, live fire drills, Search and Rescue (SAR) operations etc. Last year’s MALABAR-2020 had a full QUAD naval task force representation with the Australian warships too participating. It was an elaborate naval exercise which was conducted in two phases on India’s Eastern and Western seaboards. The highlight of the exercise was the deployment of the Aircraft Carrier Task forces jointly by US and India, well signifying the Naval might which can be put in the IOR. With the Indo-US LEMOA (Logistics Exchange Memorandum of Agreement) in place, the US warships (including aircraft carriers) can get berths for refueling and repairs within the Indian ports. Interoperability amongst the QUAD Task Force too shall be possible whenCOMCASA (Communications Compatibility and Security Agreement) and BECA (Basic Exchange and Cooperation Agreement)are implemented in total.

The Naval diplomacy being displayed by India is an indicator of this shaping dynamics in the Indo-Pacific.

Indian Navy has always maintained a tactical advantage over the IOR to ensure compliance to the internationally established Rules of the Road (ROR) for the seas. This has been respected by the world (like declaration of warships transiting IOR etc.), but Indian Navy has observed and reported multiple sightings of undeclared Chinese ships and submarines suspiciously lurking within the IOR.

The Indo-Pacific is slowly but surely turning into a serious Naval Theatre for multi-national activities with a vision to establish a free, open, inclusive anda rule-based ordering of the Indo-Pacific to support the freedom of navigation and peaceful cooperative use of the seas. The goal is to respect and adhere to the international laws like the United Nations Convention on the Law of the Sea (UNCLOS) and peaceful resolution of territorial sea disputes instead of coercive actions to subdue a lesser developed nation.

On the other hand, China endeavours to establish a defensive perimeter around its seas (Yellow Sea, East China Sea and part of South China Sea) by following a sea denial policy in these regions. Other stakeholders in the region have opposed this and already hot disputes have occurred over the avowed claims (like over Spratly Islands and Paracel Islands).Similarly, Taiwan too forms a part of China’s sea denial strategy for controlling the North East Asian regions (especially Japan and Republic of Korea) in the future.

The region of Pacific Islands stretches from Hawaii in the north to Tonga in the south, and Easter Island in the east to New Caledonia in the west. In this region too, China is emerging as an important economic influencer in the small and remote Pacific Island nations. The pandemic has not really helped the situation for these countries and external support in terms of financial or other aid is difficult to refute by these smaller nations. China’s growing influence in the Pacific is also seen as a strategic threat to US security.

US interest in the Indo-Pacific region has always been well illustrated with the fact that US Indo-Pacific Command established after World War II is the largest unified command. It was re-designated as U.S. Indo-Pacific Command in 2018 mainly to focus on the connectivity between the Indian Ocean and the Pacific waters. A fleet travelling from Andaman Sea may take less than two days to reach the South China sea.The positioning of a large armada in the Indian Ocean shall be a force to reckon with, especially when it moves toward the contested South China Sea to test the waters for “freedom of navigation”. The Andaman Sea is considered as a choke point by China as it’s major seaborne supplies pass through this route before entering the narrow Malacca Strait. China has been working on a strategy to create alternative sea and land based supply paths as a safeguard and has established presence in Sri Lanka, Pakistan and Bangladesh.

France has a direct strategic and economic stake in New Caledonia, French Polynesia, and Wallis and Futuna. France is a member of the Pacific Community and the Secretariat of the Pacific Regional Environment Programme (SPREP). Since 2018, France and Australia have a military Mutual Logistics Support Agreement in place. The two nations regularly hold combined Armed force training exercises in the Pacific and Southern Oceans.France is constructing twelve Attack Class submarines in Australia as part of a joint programme worth approx. USD 50 billion (with first delivery of HMAS Attack scheduled in early 2030’s).

Japan although has trade ties with China but has always been suspicious of China’s growth as a military power. China’s assertiveness closer to Japanese waters and airspace have been a testing time for Japan. The Chinese activities have been in the garb of training drills or fishing activities and multiple skirmishes with Japanese forces have occurred in the past. Such security challenges (from China) hastilted Japan towards participation in the new security relationships with key partners like India and Australia.

With France and QUAD navies coming together, other countries which have stakes in the Indo-Pacific (like the UK) may also be inclined to join the initiative. But for ASEAN countries to step forward in the QUAD Security dialogue, QUAD may require more economic muscle. Australia was in a position to sustain its commerce despite souring trade partnership with China. However, not many in the Indo-Pacific may have such a depth, especially during these pandemic times. Sino-India commerce too entails major interests for India. India needs to create a win-win situation for itself (especially when dealing with US and Russian military supplies) and diplomacy has a tight rope here. Dichotomy is that Russia shall be an important contributor to the modernization of the Indian Navy so that it can participate as a potent arm within the QUAD Naval operations.

(The author is a Strategic Analyst and C4I expert. Email: milind@aikairos.com Views expressed are personal and do not reflect the official position or policy of Financial Express Online.)