He will also be the chief guest at the seventy-fourth republic day celebrations at Kartavya Path on 26 January 2023. 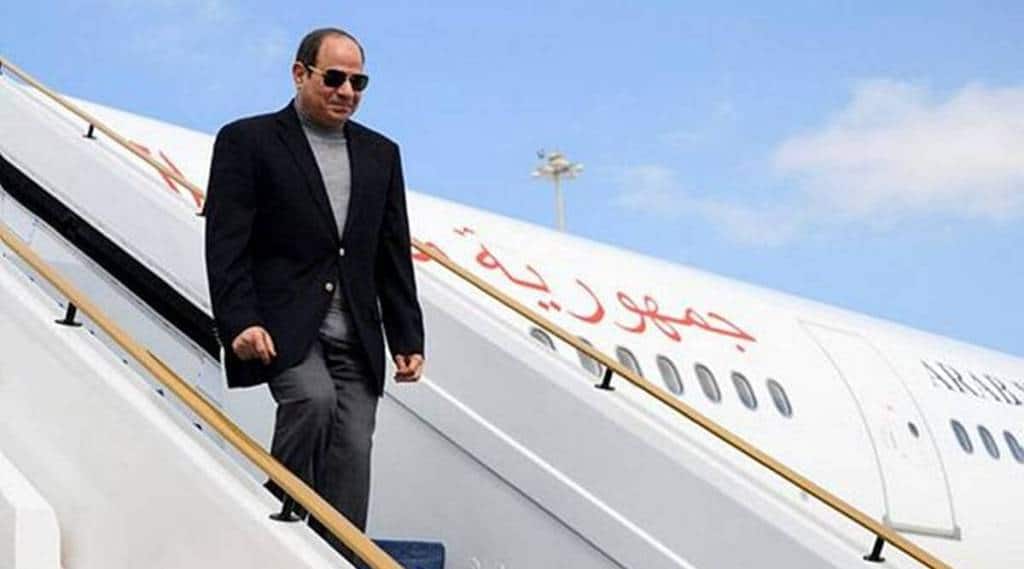 Egyptian President Abdel Fattah El-Sisi will arrive in Delhi tomorrow for a three-day state visit to Indiaat the invitation of Prime Minister Narendra Modi. He will also be the chief guest at the seventy-fourth republic day celebrations at Kartavya Path on 26 January 2023. It will be President Sisi’s third visit to India after assuming the presidency of Egypt in 2014.Earlier, he visited the country in October 2015 to participate in the third India-Africa Forum Summit and later in September 2016 on a state visit. President Sisi’s upcoming visit is also at the time when India and Egypt completed 75 years of diplomatic relations.

President Sisi is the first Egyptian leader and the fifth from the Middle Eastand North Africa Region To attend the Republic Day celebrations. Previously, India invited the leaders of Algeria in 2001, Iran in 2003, Saudi Arabia in 2006 and the UAE in 2017.India and Egypt enjoy centuries-old civilizational, cultural and economic linkages built on people-to-people connections. They have the shared legacy of fighting British colonialism and championing the cause of the non-alignment movement during the cold war era. By inviting President Sisi to the republic day celebrations this year, India seeks to strengthen further and deepen the “time-tested”partnership between New Delhi and Cairo. India has also invited Egypt for the New Delhi G20 summit later this year, alongside Oman and the UAE from the region.

Also Read
China wants to reduce India’s influence in Indian Ocean region, say papers submitted at DGPs’ meet
Is the mega military project to acquire 114 fighters for the IAF in jeopardy?
Republic Day: 23 tableaux to roll down on Kartavya Path to showcase India’s cultural diversity, economic progress
Budget FY2024: What to expect in the Defence sector?

In the last decade, India and Egypt have been working together closely. The bilateral trade between countries reached a record high of US$ 7.26 billion in 2021-22.They also have a reasonably balanced trade, with Indian exports to Egypt worth US$ 3.74 billion and Egyptian exports to India worth US$ 3.52 billion.Besides, both countries enhanced their cooperation in various sectors, such as agriculture, energy, defence, security, textiles, industries and retail. The personal chemistry between Prime Minister Modi and President Sisi also contributed to the closer cooperation between India and Egypt. Both leaders met several times and had regular telephone conversations, especially during the Covid-19 pandemic.

The growing strength of India-Egypt ties was evident during the pandemic and the Russia-Ukraine conflict. During the second wave of Covid-19 in India, Egypt shipped 30 tons of medical supplies and 300,000 doses of antiviral Remdesivir injection. In a reciprocal move, India gave clearance for the initial shipment of 61,500 metric tons of wheat to Egypt in May 2022 despite India banning wheat exports following the climate change-induced heatwave that hampered grain production. Egypt – heavily relying on wheat imports from Russia and Ukraine – faced a severe shortage of wheat after the Russian invasion of Ukraine.

President Sisi’s visit comes after two recent high-profile visits from the Indian side.Defense Minister Rajnath Singh travelled toCairo in September 2022 and discussed the contours of India-Egypt defence and security cooperation.During Singh’s visit, India and Egypt signed an MoU to bolster defence cooperation. Egypt is the eighth country in the Middle East to enter a defence agreement with India, after Iran, the UAE, Qatar, Saudi Arabia, Oman, Israel and Jordan. The country has also expressed interest in purchasing India’s Indigenous ‘Tejas’ Light Combat Aircraft, and both countries are likely to strike a deal during President Sisi’s visit. In October 2022, External Affairs Minister Dr S. Jaishankar made his first-ever visit to Egypt as foreign minister. He met President Sisi and other senior Egyptian officials and discussed issues of mutual interest for both countries. Jaishankar’s visit also set the ground for India’s decision to invite President Sisi as the chief guest for the republic day celebrations.

Egypt is an important player in the Middle East and a prominent voice in the Arab world, located at the crossroads of Europe, Asia and Africa. The Suez Canal, one of the major choke points in the world that connects the Mediterranean Sea with the Red Sea and the Indian Ocean, is controlled by Egypt. The country is also a gateway to Africa, with immense logistical and trade networks. In addition, Egypt was the first Arab country to normalize relations with Israel in 1978. India recognizes the geopolitical and geoeconomic relevance of Egypt in the region. Egypt also respects India’s position as a significant global player. There is a lot of potential in India-Egypt relations that are untapped. Both countries could shape the regional security and economic architecture and engage in multilateral engagements along the lines of the recently conceived I2U2 (India, Israel, the US and the UAE), Negev Forum (Bahrain, Egypt, Israel, Morocco, the US and the UAE) and India-UAE-France trilateral.

President Sisi’s visit will be a turning point in India-Egypt relations.In a press interview, Egypt’s Ambassador to India, Wael Hamed, has already hinted that India and Egypt will upgrade their bilateral ties to a “strategic partnership” during President Sisi’s visit. Besides, both countries will likely sign half a dozen MoUs on various sectors after the high-profile meeting between Prime Minister Modi and President Sisi. In 2017, India invited Abu Dhabi Crown Prince Sheikh Mohamed bin Zayed al-Nahyan (now the UAE President) as the chief guest for republic day celebrations. India and the UAE upgraded their relations to a strategic partnership and entered into a free trade agreement last year. The UAE is currently one of India’s most trusted partners in the Middle East. This year, another Middle Eastern leader is coming as the chief guest for republic day. If New Delhi can emulate the ‘India-UAE model,’ it will be a significant diplomatic success for India in the Middle East.

Irfan Ahmed Nazir is a doctoral candidate at the Centre for West Asian Studies, Jawaharlal Nehru University, New Delhi. He tweets at @irfannazir_in.