Discussions of the 1st Sherpa Meeting were initiated by India’s G20 Sherpa, Amitabh Kant, through an overview of India’s G20 priorities across our 13 Working Groups. 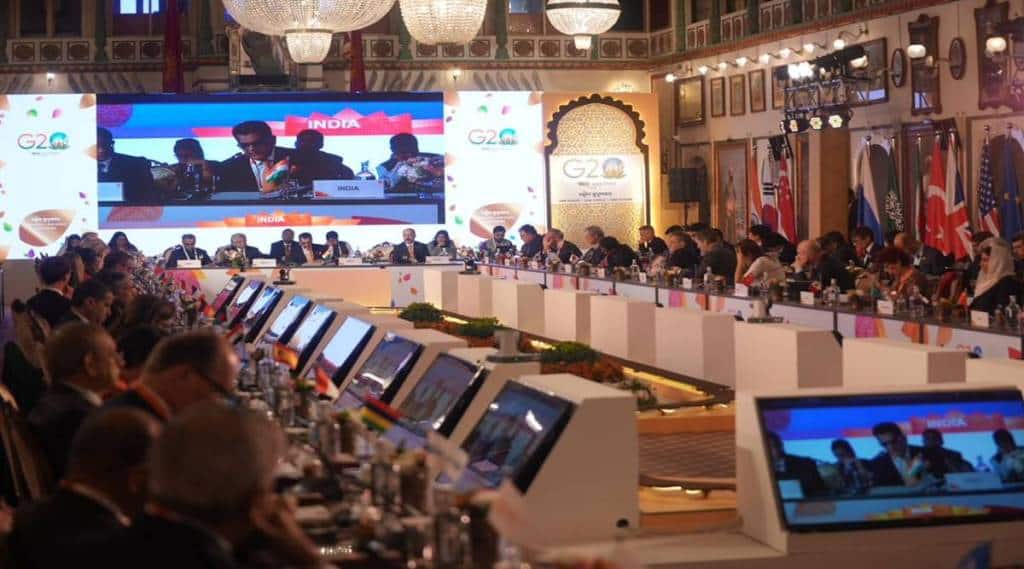 Discussions of the 1st Sherpa Meeting were initiated by India’s G20 Sherpa, Amitabh Kant, through an overview of India’s G20 priorities across our 13 Working Groups. (Photo source: PIB)

Discussions of the 1st Sherpa Meeting were initiated by India’s G20 Sherpa, Amitabh Kant, through an overview of India’s G20 priorities across our 13 Working Groups. The Sherpa highlighted India’s role in providing a greater voice to the Global South and utilising its G20 Chairship to forge win-win collaborations between developing countries and advanced economies.

Ajay Seth, Secretary, Department of Economic Affairs, Ministry of Finance, then proceeded to outline key economic challenges facing the world today, and highlighted the need for collective efforts by the G20 to respond to them.

Also read| G20 and India: Time to leverage and boost its soft power

This was followed by Session 1 on Technological Transformation, including the working groups on Digital Economy, Health, and Education. Delegates discussed challenges in accelerating digitalization across different sectors in their countries. The importance of cyber security, inclusivity in expanding access to technological services and infrastructure, and digital skilling, were inter alia highlighted in the discussions.

Session 2 on ‘Green Development and Lifestyle for Environment (LiFE)’ followed, with the focus moving to effective strategies to collectively combat climate change. In addition to the first two sessions , a dialogue on ‘Global & Regional Economy: Prospects & Challenges’ and an informal ‘Chai pe Charcha’ among G20 member countries was also held.

A dialogue on “Global & Regional Economy: Prospects & Challenges” was held next. Kristina Kostial, Deputy Director of Strategy and Policy Department, IMF, made a presentation on the pressing global economic challenges of the day, including the international debt situation and trade. The dialogue discussed ideas for the world to tackle such concerns and emerge more resilient to economic vagaries.

The other activities on Day 2- December 5 included an excursion to the historic Manek Chowk in Udaipur, The day concluded with ‘Ratri Bhoj par Samvaad’ (Conversation over Dinner) at the Jagmandir, Udaipur.

Through a range of cultural activities, visits to historic sites and scenic locations and showcasing Rajasthani art and craft, the visiting G20 delegates have got an insight into the traditions of Rajasthan. Earlier on December 4, the opening day of the meet, international Sherpas, their delegations, and heads of invited International Organisations (IOs) from G20 Members, 9 Guest countries and 14 IOs, were warmly welcomed in Udaipur.