The drill is underway off the East Coast of Africa since July 26-Aug 6, is sponsored by the US Africa Command (AFRICOM) and is indicative of India’s intention to step up its engagement with the countries of the Western Indian Ocean region. 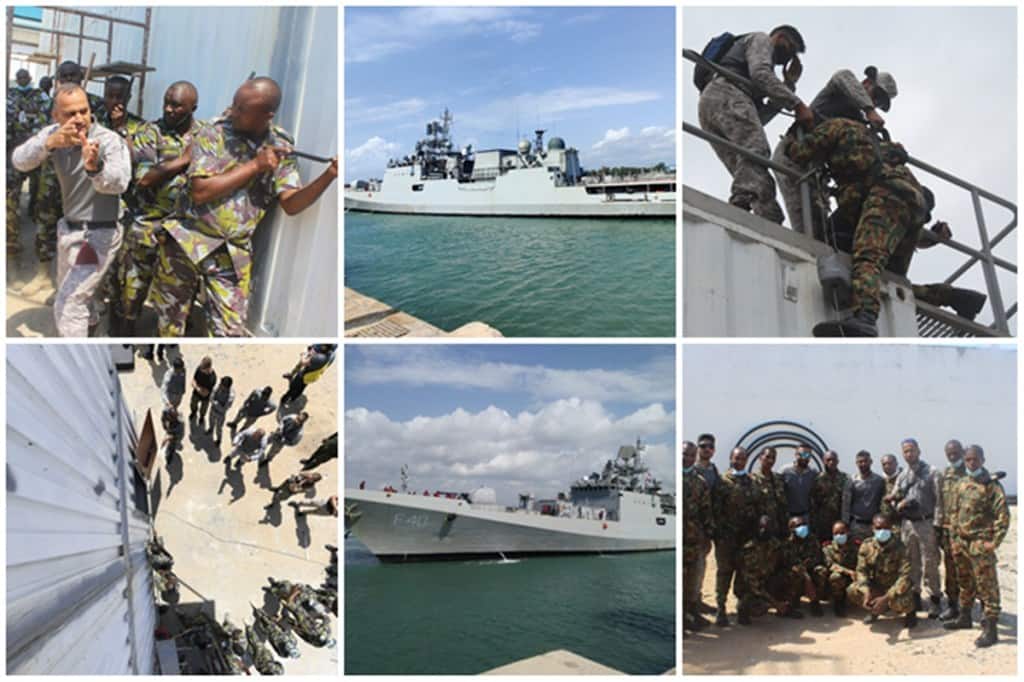 The focus of Ex Cutlass Express 2021 is on East Africa’s coastal regions which is an integral part of the Indian Ocean littoral with the waters touching 10 countries in that continent. (Photo credit: Indian Navy)

Maritime security is an important constituent of the India-Africa engagement. The drill is underway off the East Coast of Africa since July 26-Aug 6, is sponsored by the US Africa Command (AFRICOM) and is indicative of India’s intention to step up its engagement with the countries of the Western Indian Ocean region.

Also Read
Is the mega military project to acquire 114 fighters for the IAF in jeopardy?
Wait is over! Production of legendary Kalashnikov AK-203 assault rifles start
Message from Home Minister Amit Shah’s Kashmir visit
Apache for the Indian Army to land in 2024; will have indigenous fuselage!

Who all is part of the multinational drill?

There are 12 Eastern African countries, US, UK, India and various international organisations.

The focus of Ex Cutlass Express 2021 is on East Africa’s coastal regions which is an integral part of the Indian Ocean littoral with the waters touching 10 countries in that continent. These countries are totally dependent on the Indian Ocean for their economic livelihood as well as sustenance.

Why? Because, according to reports almost 90 per cent of their trade moves over the waters and also their resource rich EEZ is in the Indian Ocean.

The East Coast of Africa also helps many landlocked nations in the continent to get access to the sea which is a significant source of revenue. According to an official note issued by the Indian Navy, these countries in the East Coast jointly share India’s commitment towards ensuring a rules-based international order for the safe and secure passage of maritime trade across the SLOCs of the Indian Ocean.

The multinational exercise has been designed to increase interoperability between the regional navies and also to promote national and regional security. And also to improve combined maritime law enforcement capacity.

Along with other participating countries, the Indian Navy, which is there in a “Trainer Role’’ is undertaking training of contingents in various fields across the spectrum of maritime security operations.

With focus on Maritime Domain Awareness (MDA) between various partner countries there is Information sharing and information flow too.

So far, INS Talwar which is in Mombasa, Kenya, has hosted various events which will help in further enhancing stronger relations with not only Kenya but the Indian community and other partners as well.

The visit of INS Talwar is in line with India’s stated policy in the direction of maritime cooperation in the IOR and vision SAGAR (Security and Growth for All in the Region).

In the harbour phase of the exercise, between July 26 -28 at the Bandari Maritime Academy in Mombasa, a team of Indian Navy Marine Commandos (MARCOS) had conducted training of personnel from navies of Kenya, Cameroon, Djibouti, Mozambique and Coast Guard of Georgia.

The MARCOS during the exercise the participating sailors of the foreign navies shared the best practices in executing Visit, Board, Search, and Seizure (VBSS) operations.

Commodore Anil Jai Singh, Vice President of the Indian Maritime Foundation, tells Financial Express Online, “From an Indian perspective, this increasing US focus on the western Indian Ocean is both welcome and significant to dispel the oft-expressed perception that the Indo-Pacific is more Pacific than Indo. The western Indian Ocean is critical for India’s security and economic well-being. A major portion of India’s energy imports and trade transits through this region and India’s naval primacy in this region has never been challenged. India has enjoyed close cultural and historical links with the region with a large Indian Diaspora and considerable commercial engagement and infrastructure development in the region.”

However, “China has made deep inroads over the years into the region and its expanding footprint in the western Indian Ocean through its Belt and Road Initiative and a more-or-less permanent naval presence is therefore a matter of concern. It has established a base at Djibouti and has a major presence in the countries located along the East African coast, including Kenya and Tanzania; it is also seeking to monitor the Mozambique Channel and is eyeing the resource rich African continent. Not surprisingly, China’s is perhaps the most cohesive approach to the western Indian Ocean region,” the former submariner says.

Why is this exercise important?

According to Commodore Singh, “A multinational exercise like Cutlass Express 2021 is an important regional maritime security initiative. It brings together navies and maritime security forces of all shapes and sizes on a common platform which helps develop interoperability and institutionalises operating procedures. Exercises both ashore and afloat enable the validation of these and highlight the operational limitations which can then be addressed. This exercise is covering a wide spectrum of maritime security scenarios with the intention of enhancing regional cooperation, maritime domain awareness, information sharing, and constabulary functions to counter illegal maritime activity and the sub-conventional security challenge in a region that has had more than its fair share of security challenges at sea. These have not only been detrimental to the region but have also impacted the global maritime community.”

“This concern had led the IMO to initiate the ‘Code of Conduct concerning the Repression of Piracy and Armed Robbery against Ships in the Gulf of Aden and Western Indian Ocean’, known more commonly as the Djibouti Code of Conduct which was adopted on 29 January 2009. Presently, 20 countries are signatories as members and India joined as an Observer in 2020. This was an important initiative towards developing a suitable response,” he explains.

According to him, “Many of the 13 participating countries barely have a navy or even an effective coastal security force; it’s therefore important to show them to various scenarios and familiarise them with laid down procedures and their practical implementation at sea.”