Thirty-Five years later with 1300 killed in action and approximately 3500 grievously injured have been kept away from public memory on the sacrifice of the Indian Servicemen in a foreign country. 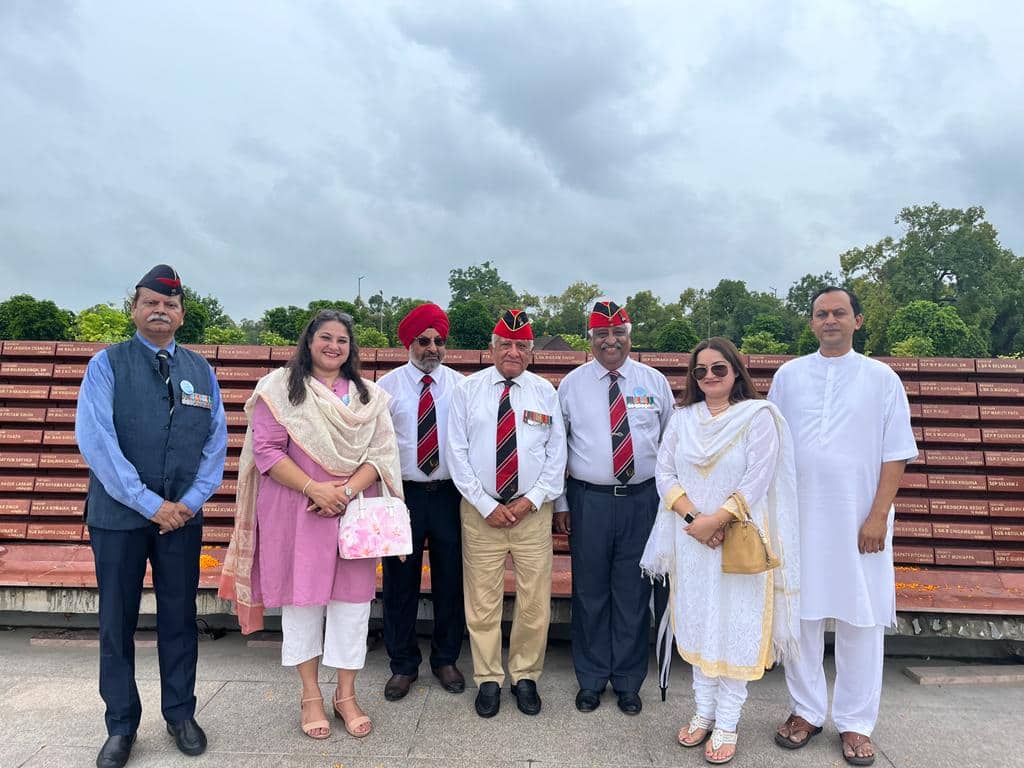 OPERATION PAWAN was launched on 30th of July 1987 on the signing of the Indo Sri Lanka Peace Accord between Late Prime Minister Rajiv Gandhi and Sri Lanka President Junius Richard Jayewardene on 29th July 1987.

This was the first overseas tri service peace keeping operation launched to bring relief to the Tamils of Sri Lanka who were under duress; the local laws had been amended by an act of parliament to bring the stature of the Sri Lankan Tamil to a status of a second-grade citizen.

Also Read
Catch-22 for HAL Tejas in Argentina
China: Is there a power struggle within
Sweeping changes in the Indian Army: Time to go slow
Time for Turkiye-India’s regional and global cooperation

Thirty-Five years later with 1300 killed in action and approximately 3500 grievously injured have been kept away from public memory on the sacrifice of the Indian Servicemen in a foreign country. This year on 29th July 2022 is the day when the Braveheart’s of OP PAWAN were honoured at the National War Memorial.

The Tamil youth took to the gun and this movement was supported by the Sri Lankan Tamils overseas who launched a campaign for an Elam (freedom) from the shackles of the Sinhala regime.

The political parties of Tamil Nadu provided safe haven in Tamil Nadu and gave their whole hearted support to their country cousins in Sri Lanka. The Central Government at the centre was under an inexperienced Prime Minister who was keen to see India as a regional power. In 1984 the Prime Minister on the assassination of his mother got elected on a popular sympathy vote. Egged on by his close coterie of friends, he wanted to take rapid strides by engaging with Pakistan and China.

China, wanting to test the waters, attempted an expansionist movement in the Sumdorong Chu area; this was negated by Exercise Chequerboard; to blunt the Chinese land grab.

Indian Army simultaneously undertook Brass Tacks series of exercises, culminating in Exercise Brass Tacks IV, which involved the mobilisation of India’s offensive corps in the deserts of Rajasthan along with the Indian Air Force and the Indian Navy.

The Tamil rebel groups were engaged in a guerrilla war with the Sri Lankan Army. The Sri Lankan government launched an offensive in Jaffna in late May 1987. The local population was denied food and medicines, which resulted in India launching humanitarian aid through Tamil Nadu fishermen on 19 fragile 32-foot-long, 96 horsepower fishing boats, bearing Red Cross flags. Each boat carried two tonnes of cargo; pulses, kerosene, bread, matchsticks, tamarind, vegetables, milk powder and salt. But the main article was rice, 27 tonnes in all. This was contested by the Sri Lankan Navy as these boats attempted to enter the Sri Lankan waters.

As a contingency plan in anticipation of a blockade at sea, five AN 32 transport aircraft of the IAF took off from Bengaluru heading for Jaffna, 450 km away. There was excitement among the seven journalists on board the lead aircraft; flying at 12000 feet. They were escorted by four Mirage 2000 aircraft, for protection / intervention by the Sri Lanka air force.

The Indian Government had initially considered launching an offensive operation and was banking on the support of the LTTE; akin to the Mukti Bahini during 1971 operations in Bangladesh. The wily Sri Lankan president offered the olive branch of a peace accord, which made the PM of India and the Sri Lankan President look like statesmen. The only factor the two leaders did not take into consideration was the defiant mood of the LTTE supremo Prabhakaran.

All attempts to get Prabhakaran on board were failing. In a last resort attempt, Prabhakaran was flown by his R&AW handlers from Chennai to New Delhi to meet with the PM. Prabhakaran refused to change his stance, to consent to the peace accord. The LTTE supremo was left to himself to manage his way back to Jaffna. This insult was not forgotten and the revenge was taken on 21 May 1991 at Sri Perumbudur, in which a suicide bomber targeted Rajiv Gandhi. Recently the co-accused were released from jail having completed their prison terms.

This ceremony was successfully held for the second time to commemorate its 35th Anniversary by the Veterans of OP PAWAN who engaged with the Army HQ and were permitted a silent ceremony.  Efforts are on to get official recognition. The ceremony was attended by approximately 100 officers, ladies and the NoK of those who had made the supreme sacrifice. Mrs Surjeet Bedi mother of Late 2/Lt Amardeep Singh Bedi, Vr C (P). The Braveheart laid down his life on 18th of Jan 1989.

The 65 Armoured Regiment was the only armoured regiment on the island, as GOC IPKF called it, his hammer to knock out any enemy who posed a threat to the IPKF. Col SP Khanna, was the then Commandant for the entire duration of the Regiment’s overseas deployment.

The Regiment sacrificed 1 Officer, 1 JCO and 15 OR. The Regt lost five T 72 M1 tanks in OP PAWAN.Two T 72 M1 tanks were killed by the use of Improvised Explosive Devices. One was an M Kill, and two tanks were rendered unoperational due to extensive hits by RPGs and accurate small arms fire destroying the day and night vision devices.

On cessation of a brutal engagement with the LTTE, its cadres were forced to melt away to the jungles of Vavuniya and Mullaitivu.

The mechanised forces were also restructured as Combat Groups in the following manner.

Combat Group 65 Armoured Regiment shed Alpha (Dogras) and Bravo (Jats) Squadrons and was allocated a company of 13 Mechanised Infantry to be deployed at Batticaloa, under command of 57 Mountain Division and co-located with 59 Mountain Brigade.

Combat Group 13 Mechanised Infantry was deployed with Bravo Squadron at Trincomalee to ensure the protection of the harbour and the airfield under command 36 Infantry Division.

Combat Group 15 Mechanised Infantry was deployed at Vavuniya with Alpha Squadron and under command of 4 Infantry Division.

What is the success of a military campaign?

The success of a military campaign is evaluated based on the degree of achievement of planned goals and objectives through combat and noncombat operations. This is determined when one of the belligerent military forces defeats the opposing military force within the constraints of the planned resource, time and cost allocations.

To amplify each action fought would be impossible to narrate in a short article, the list of Honours and Awards The include one PVC,6 MVC and scores of other awards and Mention in Dispatches is adequate to state that the Government of the day awarded the bravery and sacrifice of the men in uniform.

The gallantry displayed and sacrifices made in OPERATION PAWAN were no lesser than that displayed during Operation VIJAY.

To my mind OP PAWAN was a success; keeping in mind the tasks allocated to the GOC IPKF.

The LTTE inflicted heavy casualties and it had to flee from Jaffna to the jungles of Vavuniya.

Their supply lines were disrupted, however due to support from Tamil Nadu main land and cross purposes of the intelligence agencies this was not completely choked off. Peaceful elections were conducted in the Northern and the Eastern provinces.

Rehabilitation and aid to civil authorities restored most of the civic agencies to start functioning.

The Sri Lanka Armed Forces and police were restricted to their camps and safe from annihilation by the LTTE.

The Sri Lankan army was able to concentrate and fight against the Janatha Vimukthi Peramuna(JVP) in the Southern States of Sri Lanka.

The 65 Armoured Regiment took on the role of infantry and carried out all operations of the infantry to include road and rail opening, area domination patrols, search and destroy missions, raids on specific intelligence inputs. Tanks were occasionally employed for area domination patrols along the coastline and to provide direct fire support on specific need-based operations.

The employment of an armoured regiment in a built-up area manifested with jungles, sea and lagoons was unique. The ingenuity of the officers and the troops ensured that casualties were bare minimum.  The bravery, leadership and camaraderie displayed has been etched in the ethos of the regiment and it continues to perform at its peak combat efficiency.

The Regiment lived up to its motto of MaanYaMrityu, Jai Hind.

About the author: He is an Indian Army Veteran from 65 ARMOURED REGIMENT.