While China continues with its bullying tactics, the armies of both India and China continue to be locked in a standoff along the Line of Actual Control (LAC). 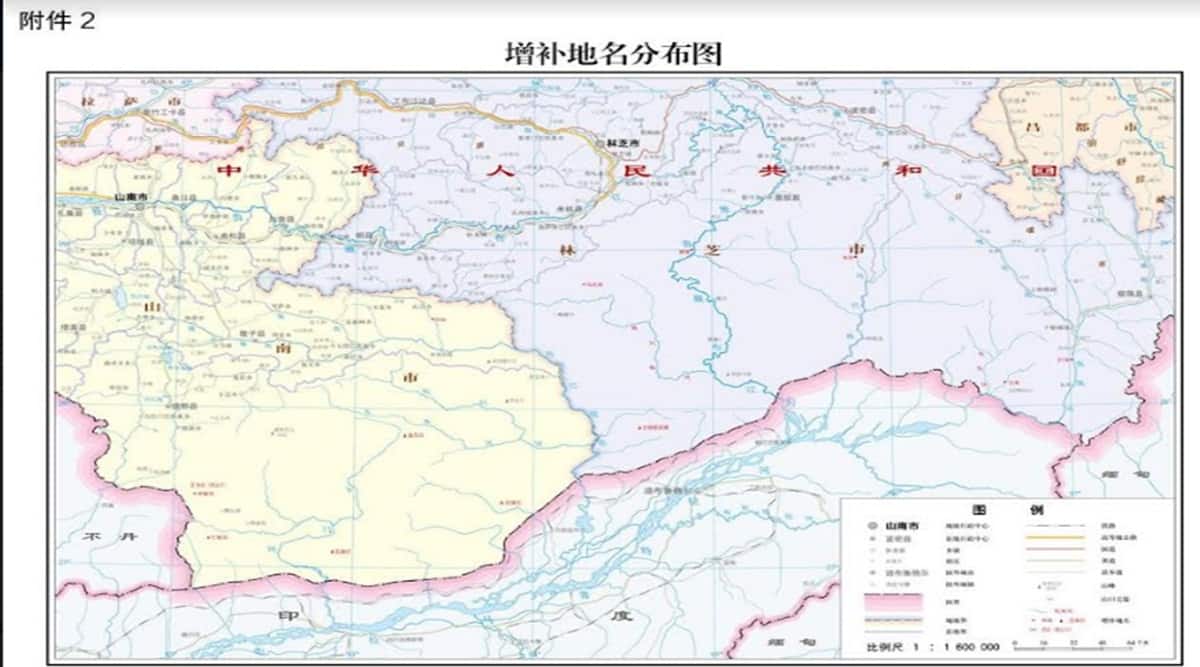 In China’s maps, Arunachal Pradesh is shown as “Zangnan” or “South Tibet”.

Days ahead of its new Land Border Law coming into force, China on Thursday (Dec 30, 2021) decided to give new names to 15 places in the Indian state Arunachal Pradesh. This is not the first time. China has reassigned names in April 2017 too.

While China continues with its bullying tactics, the armies of both India and China continue to be locked in a standoff along the Line of Actual Control (LAC).

“Beijing has renamed 15 places in Arunachal Pradesh as it wants to reinforce its claims to sovereignty over the region, measures that it started in 2017. Ostensibly this is on the basis of history, culture and administration,” opines Lt Gen PS Rajeshwar (retd). “We should anticipate more of this in the future,” he cautions.

What is the Chinese announcement?

That it has standardized in Chinese characters, Roman and Tibetan alphabets names of 15 places in Arunachal Pradesh, and claims it is in accordance with regulations on geographical names which has been issued by the State Council, China’s cabinet.

The 15 places which have been reassigned names find their mention with exact coordinates and eight are located in the residential areas, one is a mountain pass, two are rivers and four are mountains.

Responding to a media query about the new names assigned, the official spokesperson of Ministry of External Affairs (MEA), Arindam Bagchi, said “This is not the first time China has attempted such a renaming of places within the state of Arunachal Pradesh.”

“In April 2017, China had sought to assign such names,” Mr Bagchi added.

Sharing his views with Financial Express Online, Lt Gen PS Rajeshwar (retd) says, “It feels that it has the ultimate authority over the people of the area, as it spans some inhabited places. The development this time must also be considered with the new Chinese land border law, aspects that will make a future resolution of the border here a very uphill task. Further, it provides internal legitimacy to orders that the Chinese State can give to the local administration of TAR or the PLA, who will now be bound by it.”

What should India do about this?

“We could do well to strengthen our border areas and, if possible, organize tourist movements as far forward as possible,” Lt Gen PS Rajeshwar suggests.

“It has been a constant endeavour of China to increase its boundaries in order to achieve the maximum territorial limit reached by the Qing Empire at its height. After the annexation of Tibet in the 1950s, it has started claiming Arunachal Pradesh in its entirety as Southern Tibet.”

According to Maj Gen Kumar, “On one hand, it has carried out incursions across LAC in different areas putting peace and tranquility at risk. On the other hand, it has initiated various measures to ensure unilateral legitimisation of its claims in Eastern Ladakh, Sikkim and Arunachal Pradesh.

It is towards this end that China has brought out its law fare in the form of a new land boundary law which will come into force from 1 Jan 2022. With this law in force, it has tasked the PLA, PAP & other state organs along with the citizens, especially the residents of border areas, to initiate multiple actions to enhance its foothold towards its claim lines.”

“This effort on part of China is also being followed by other ministries of the Communist party. The Ministry of Civil Affairs is one such organ which is also proactively contributing towards a malicious agenda against India. This ministry had renamed Six (06) places in Tibet / Arunachal Pradesh to give it a Chinese makeover and now the same is being extended to 15 more places in Arunachal Pradesh to be used on Chinese maps.”

And, “once these names appear on the map of Arunachal Pradesh, it will then form a part of an expanded cartographic aggression towards the larger aim of consolidating its claimed areas,” he explains.

What should be done by India?

Maj Gen Kumar suggests “It is therefore very critical that a formal complaint be lodged, not only with China but other concerned international organisations to desist China from doing so. It is equally important that India revisits its boundary issues and consolidate its claims by developing infrastructure in mission mode, settlement of border areas with civilian population, cartographic consolidation, mountaineering expeditions and other such boundary claiming actions without any further delay.

View of an academician

Sharing his views, Prof Rajan Kumar, School of International Studies, JNU says, “China’s announcement to issue “standardised” names for 15 new places in the Indian state of Arunachal Pradesh is a part of its strategy to put pressure on India and keep the issue burning. Arunachal Pradesh is an integral part of India which is disputed by China. In China’s maps, Arunachal Pradesh is shown as “Zangnan” or “South Tibet”.

This is not the first time that China has engaged in renaming places. As the Ministry of External Affairs indicated, Beijing changed the names of six places in 2017 too.

In the last ten years, China has actively engaged in ‘cartographic aggression’ by passing laws which claim the territories of neighbouring states.”

According to Prof Rajan, “Earlier in October 2021, China adopted a land border law amid heightened tensions on borders with India at Ladakh, and with the Indo-Pacific states in South China Sea. This can be viewed as an attempt to put pressure on the neighbouring states and to settle disputes on its own terms. Once these borders are shown in the official maps, and are supported by national laws, Chinese officials will not concede these territories during negotiations. It displays growing rigidity in Chinese positions on disputed territories with its neighbours. This is also viewed as a larger attempt of Xi’s vision of “forging a consciousness of the common identity of the Chinese nation”.

“In terms of realpolitik, such attempts of Beijing can be interpreted in three specific ways: first, it is an attempt to legitimize its land claims over the Indian state of Arunachal Pradesh, second, it is a retaliatory measure to forbid India from engaging directly or indirectly in Tibet, and third, Beijing is willing to create additional friction points even when negotiations are underway in the Western sector,” the Prof opines.

“On the ground, the change of names does not change the status of Arunachal Pradesh or its territory. But it will make negotiations on several other friction points more difficult,” Prof Rajan observes.