The West, embroiled as a party in the conflict, is unable to resolve the crisis which might take an ugly turn in near future. Therefore, there is a larger responsibility on BRICS. 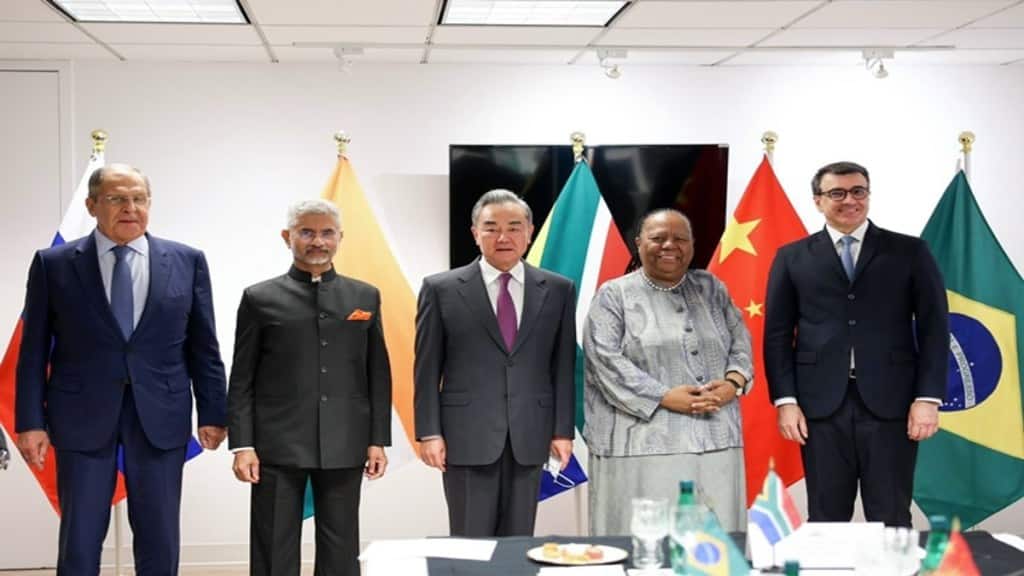 The West, embroiled as a party in the conflict, is unable to resolve the crisis which might take an ugly turn in near future. Therefore, there is a larger responsibility on BRICS.

At the BRICS Foreign Ministers’ Meeting in New York on the sidelines of the United Nations General Assembly, all the member countries reiterated concerns that they have been articulating in the past: multilateral reforms, commitment to the UN Charter, faith in international institutions such as the WTO, the G-20 and the WHO, differential responsibility for the climate change and more.

“In my harsh and critical assessment, BRICS is not living up to its expectations and is not harnessing its full potential. This is the right time for the BRICS to take proactive actions in resolving the crisis in Ukraine. China and India are the two countries in the world today which have maximum influence over Moscow. They have maintained neutral positions on Ukraine, and therefore command unprecedented goodwill in Moscow. The West, embroiled as a party in the conflict, is unable to resolve the crisis which might take an ugly turn in near future. Therefore, there is a larger responsibility on countries of the Global South especially China, India, Brazil and South Africa to take proactive measures to de-escalate the crisis,” Prof Rajan Kumar, School of International Studies, JNU states.

Also Read
India’s leadership at the G-20 summit and the resolution of the Russia-Ukraine Conflict
The Project 75 (I) for the next-gen submarine will be cleared by next year; a new plan for Minesweepers, says Navy Chief
Qatar detaining Indian Naval officers indicative of timid policy making says Former Navy Chief
Indian Navy aims to become ‘Atmanirbhar’ by 2047: Admiral Hari Kumar

Sharing his views with Financial Express Online, Prof Rajan says, “They can work as a bridge between the West and Russia in ensuring a ceasefire and gradual de-escalation. They can bring Russia, Ukraine and the West together and initiate preliminary consultations and confidence building measures.”

Adding, “It will require tremendous commitment and efforts of the BRICS leadership, but that’s worth doing it given the chances of escalation of the conflict. BRICS does have the requisite material and diplomatic resources to deal with this issue. It must come out of its cocoon and engage with the real-world issue before it is too late.”

According to Karin Costa Vazquez, Executive Director of the Center for African, Latin American and Caribbean Studies, “The world today needs cooperation in health, safety, climate, and energy transition, and the solution to some of the biggest challenges of our time depends on the BRICS. The motivation for the expansion of the BRICS is the same that gave rise to the bloc: to offer alternatives to global governance. And to offer alternatives, the BRICS must be representative of the changes that this governance has undergone in recent decades and the different visions for global political, economic and financial architecture.”

“Today, the expansion of the BRICS gains new momentum with China’s support for the entry of countries such as Argentina and Iran. The great challenge lies in the form and priority that must be given to the expansion process, and ultimately in the trust that the five members place in each other. The expansion of the BRICS is not the only way to increase the strength of the bloc. We need to resume the BRICS sustained dialogue with the world. It is also necessary to monitor the commitments made and strengthen the coordination of the bloc with CELAC, ASEAN, African Union, G20 and UN. With the UN Future Summit and the Indian Presidency of the G20 in 2023, the Brazilian BRICS and G20 presidency in 2024, and the South African G20 presidency in 2025, the next three years will be key for the BRICS to rescue multilateralism,” Ms Vazquez who is also Associate Professor at OP Jindal Global University (CALACS/JGU) explains.

More about the BRICS FMs meeting in New York

The meeting was chaired by Minister of International Relations and Cooperation of the Republic of South Africa Dr Naledi Pandor as the incoming BRICS Presidency in 2023 and the foreign ministers of India, Brazil, Russia and China were present, according to an official statement of the Ministry of External Affairs.

The ministers during the meeting exchanged views on intra-BRICS activities, as well as regional and global issues in various spheres like security, sustainable development, economic, political and financial.

The ministers also called for early finalisation and adoption of the Comprehensive Convention on International Terrorism.

According to the MEA statement the ministers at the end of the meeting committed to respect territorial integrity and sovereignty of all states. Expressing their commitment to the peaceful resolution of disputes and differences between countries through consultation and dialogue, they supported all efforts for peaceful settlement of the situation in Ukraine.