Both the UK and the UK are already members of NATO, and now with a new military alliance announced, they will be working together to deal with the emerging threats in the region. 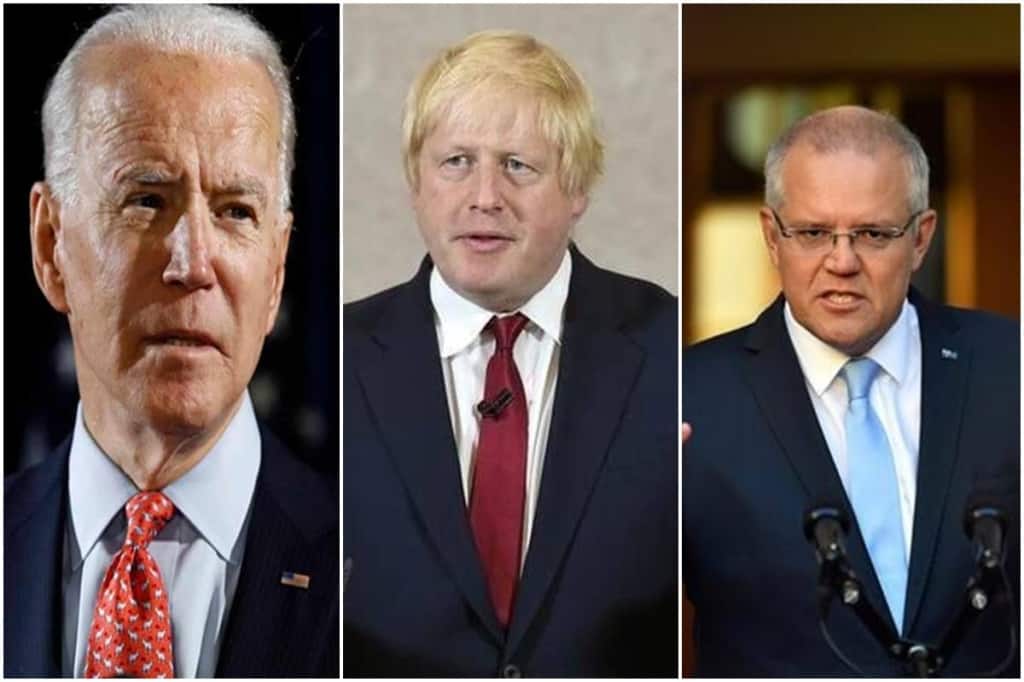 Under this new military alliance, the first initiative is going to be a collaboration on future nuclear-powered submarines for the Royal Australian Navy.

Ahead of the QUAD Leaders summit in Washington DC next week, to counter China, on Thursday (Sept 16, 2021) Australia, the UK, and the US (AUKUS) have announced a defence and security partnership.

Under this new military alliance, the first initiative is going to be a collaboration on future nuclear-powered submarines for the Royal Australian Navy. This means that the contract that Australia had for building submarines with the French company has been scrapped. The nuclear powered submarines are expected to help in the stability in the Indo-Pacific.

Once the project of the nuclear-powered submarines is completed, Australia will become the 7th country in the world to have such submarines.

According to reports, the Australian side has cancelled an estimated Aus $ 90 (USD 66 billion) deal with the French Company Naval Group. The two sides had signed an agreement for 12 nuclear-powered submarines in 2016.

The French Naval Group is making six `Scorpene’ class submarines for the Indian Navy under Transfer of Technology to Mumbai based MDL shipyard.

What has the UK Prime Minister Boris Johnson said about AUKUS?

Terming them as natural allies, according to an official statement issued by the government of the UK on this new military alliance, the British PM has said, “For defending our interests in the Indo-Pacific region and protecting our people, this partnership will become very important.”

Both the UK and the UK are already members of NATO, and now with a new military alliance announced, they will be working together to deal with the emerging threats in the region.

As reported earlier, the UK’s HMS Queen Elizabeth Carrier has been deployed to the Indo-Pacific region alongside personnel and equipment from the US. It has engaged with 40 countries including India and the main aim of this engagement is to build interoperability with like-minded partners.

Under the ‘AUKUS’ alliance, the three partners are jointly going to further increase the development of joint capabilities and technology sharing. And will towards keeping all safe and ensuring our people are kept safe from harm and support the shared goals.

The focus of AUKUS will be on integrating all defence and security related science, supply chains, industrial bases and technology.

The three countries are already sharing extensive intelligence through the Five Eyes alliance.

The country has an expertise in building and operating nuclear-powered submarines for over six decades. The Royal Australian submarines project will offer its expertise through the work carried out by Rolls Royce located near Derby and the UK based BAE Systems in Barrow.

And will involve highly skilled scientific and engineering will be involved in the design and build roles across the UK. And will also attract investment in some high-tech sectors.

The submarines project will involve all the three countries and the focus will be on interoperability, commonality, and mutual benefit.

The Royal Australian Navy is procuring up to 9 of the UK’s Type 26 frigates, from the UK. Also, the militaries of both countries, including the Royal Gurkha Rifles, have been undertaking joint training exercises.

A joint statement issued by the three countries has stated that under AUKUS, the initial efforts are going to be on artificial intelligence, quantum technologies, cyber capabilities, and additional undersea capabilities.

Does India have nuclear-powered subs?

Not yet. There are plans which are awaiting clearance by the Cabinet Committee on Security (CCS) six nuclear-powered attack submarines (SSNs). These are expected to be built indigenously and are expected to cost around Rs 96,000 crore.

According to sources the Australian Defence Minister had called his Indian counterpart Rajnath Singh informing him about the new alliance.