The new ship is the most technologically advanced guided missile destroyer in the world. 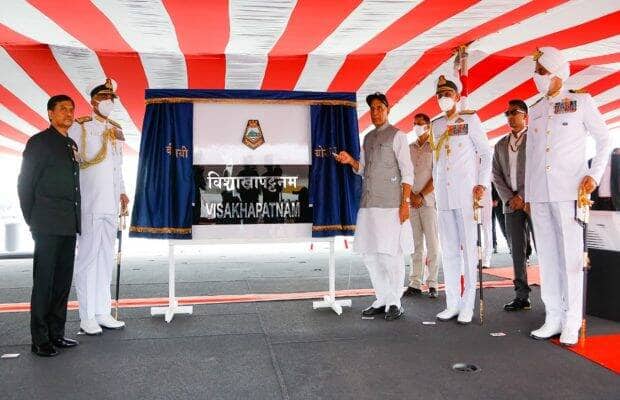 Defence minister in his address highlighted the importance of the indigenous destroyer which will further strengthen maritime security and India’s primary objective to keep the Indo-Pacific open, safe & secure

On Sunday (November 21, 2021) the Indian Navy commissioned indigenously developed missile destroyer “Visakhapatnam’’ and the naval dockyard in Mumbai. On twitter Prime Minister Narendra Modi Prime Minister tweeted that the commissioning of the indigenous INS Visakhapatnam will strengthen “our security apparatus.” And, “India’s efforts towards defence moderation will continue with vigour.”

With the commissioning in service, it will further augment the Indian Navy’s reach and flexibility, and mobility. This will help deal with emerging challenges in the Indian Ocean Region.

The commissioning of INS Visakhapatnam which has onboard state of the art weapons and sensors as well as modern surveillance radars took place in the presence of the defence minister Rajnath Singh.

Defence minister in his address highlighted the importance of the indigenous destroyer which will further strengthen maritime security and India’s primary objective to keep the Indo-Pacific open, safe & secure.

According to him, India envisions a rule-based Indo-Pacific in which interests of all participating countries are protected and rule-based freedom of navigation & security of sea lanes must for stability & economic progress.

The minister in his address talked about India’s ancient and medieval maritime power, glorious history as well as shipbuilding skills.

It is the first of the four stealth guided missile destroyers under Project 15B to be commissioned. It Has been designed in-house by the Indian Navy’s Directorate of Naval Design.

The construction of the platform was by Mazagon Dock Shipbuilders Limited, Mumbai and has almost 75 percent indigenous content.

The new ship is the most technologically advanced guided missile destroyer in the world. And it is expected to cater to the present & future requirements of the Indian Armed Forces and the country as a whole.

It is one of the most potent warships to be constructed in India with a capability of speeds in excess of 30 knots.

It is propelled by four powerful Gas Turbines, in a Combined Gas and Gas (COGAG) configuration.

With enhanced stealth features, there is a reduced Radar Cross Section (RCS) which can be achieved through use of radar transparent materials on exposed decks, plated masts, efficient shaping of hull, and full beam superstructure design.

Also, the INS Visakhapatnam has anti-submarine warfare capabilities, these have been provided by the indigenously developed rocket launchers, torpedo launchers and ASW helicopters.

The destroyer is equipped to fight under Nuclear, Biological and Chemical (NBC) warfare conditions.

It has on board sophisticated state-of-the-art weapons and sensors like Surface-to-Air missiles and Surface-to-Surface missiles.

Has a modern surveillance radar and this provides target data to the gunnery weapon systems of the ship.

The new destroyer has been named after the historic city of Andhra Pradesh on the east coast, Visakhapatnam, ‘City of Destiny’.

It has a total complement of about 315 personnel, and better crew comfort is one of the important features of INS Visakhapatnam. This has been achieved through ergonomically designed accommodation based on ‘modular’ concepts.