Astra missile contract with BDL: Is it another step in opening an export pathway?

Designed by the DRDO, the missile will focus not only on BVR attacking capabilities but also on close combat engagement. 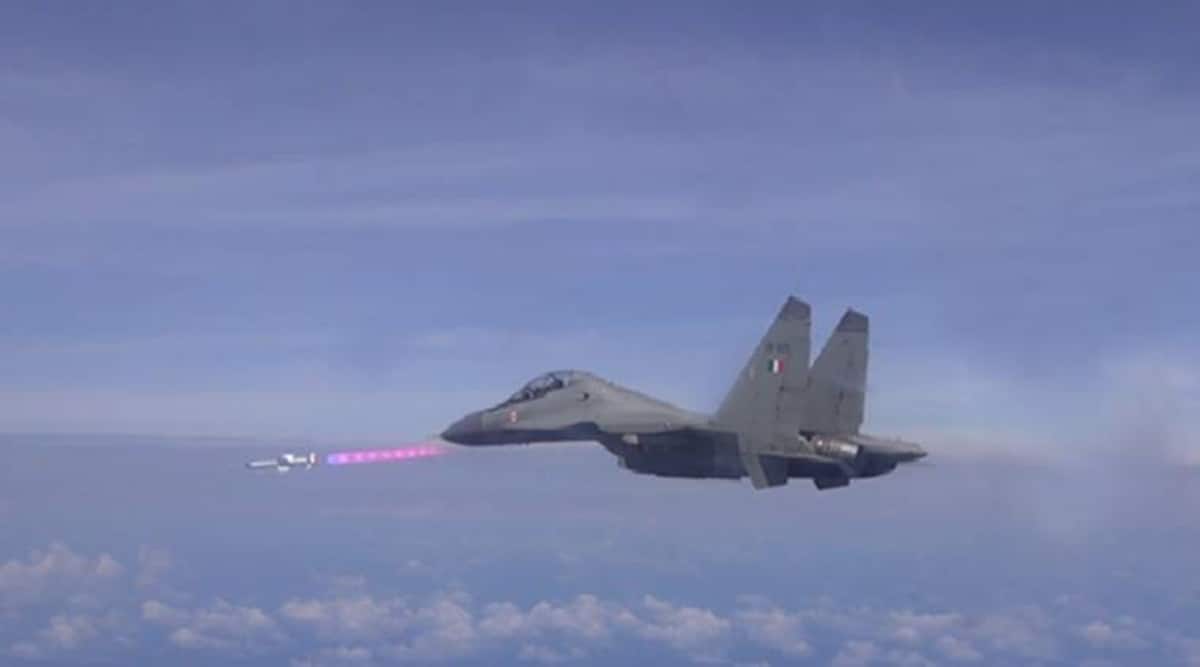 The Astra Mk-I BVRAAM was designed on the basis of the staff requirements presented by the IAF. (File/DRDO)

The Ministry of Defence signed a Rs 2,971 crore deal with Bharat Dynamics Limited (BDL) to secure the supply of the first air-to-air missile (AAM) developed by India and the equipment associated with it. The missile is the Astra Mark-1 Beyond Visual Range (BVR) AAM. A missile with these features, i.e., AAM with BVR capability, provides an aircraft with large stand-off ranges. With this, an aircraft can neutralise the adversary’s fighter jet without having to expose itself to enemy air defence measures. Such a setup is essential in ensuring that we gain and sustain air space superiority.

With a range of around 110 kilometres, a top speed of Mach 4.5, and a price tag of Rs 7-8 crores apiece, the Astra Mk-I is boasted to be technologically and economically superior to many such similar missile systems developed elsewhere. While plans are to reduce India’s dependence on French and Russian missiles and integrate the missile onboard the Indian Air Force’s (IAF) Tejas and MiG-29 platforms, export may not be too far-fetched a possibility either.

The Astra Mk-I BVRAAM was designed on the basis of the staff requirements presented by the Indian Air Force (IAF). Designed by the Defence Research and Development Organisation (DRDO), the missile will focus not only on BVR attacking capabilities but also on close combat engagement.

DRDO developed the missile and associated systems required for its launch, ground handling and testing in coordination with the IAF. The latter has already undertaken successful trials of the missile, which is fully integrated on the Su 30 MK-I fighter aircraft. Astra will be integrated with other fighter jets, including the Light Combat Aircraft (LCA) Tejas and the Indian Navy’s MiG 29K.

Noted military hardware analyst Joseph Chacko noted that the Astra Mk-1 allows the IAF to have a cheaper domestic option to the Russian and French missiles. However, he also pointed out that the missile’s range is not radically different from the alternatives. “The technical description of the missile indicates that it is capable of hitting targets flying at speeds up to Mach 1.4 at a distance of 110 km with a 15 kg warhead. As for range, it does not fundamentally change the war fighting capability as the IAF has similar distance missiles,” he said.

According to Chacko, the real strength of the missile lies in its technical specifications and the fact that it is indigenous. He said that “the missile’s technical description shows that it is technologically superior, and in case it develops operational problems, it can be rectified within India. Another important feature is that it can be integrated into any platform the IAF requires. For example, France may have objections to integrating its missiles on the platforms or radars of non-French or Indian origin.”

“The quality assurance systems are very stringent, and the result is a highly reliable system. Astra has a control guidance system that has been mastered by the Missile Cluster of DRDO. The system has been thoroughly flight-tested a number of times for different aspects of target engagement.”

Apart from the technological developments, the contract signed by the MoD with BDL has boosted self-reliance in the defence sector, too. The Transfer of Technology (ToT) from DRDO to BDL for missile production is already completed. This project will serve as a catalyst in developing infrastructure and testing facilities at BDL, where production of the munition is currently in progress. The indigenous production of the Astra missile is also likely to create opportunities for several micro, small, and medium enterprises (MSMEs) in aerospace technology.

Dr Guruprasad believes this missile is “one of the top-class Missiles in the world today.” Even in the past, sources have discussed the Astra missile’s export potential. They had also said that the weapon would be considered for sale to friendly countries.

Chacko is sceptical about this, though. He believes that with BDL having received the first order, the production missiles will have to go through some hiccups before settling down as a matured product. The missile also has to see combat before it can be called combat worthy.

He said, “it is too early to talk about Astra Mk-1’s exports, and India itself will require it in substantial quantities.”

Miguel Miranda, a Philippines-based South Asian defence industry analyst, emphasised that “instead of sizing up India’s “defence products” in the global market, what needs to be accomplished are internal dialogues between the DRDO and the defence ministry on what, how, and where to export.”

He went on to say that there is a real push to sell Indian military technology abroad and some minor successes in that regard are very encouraging. “However, keep in mind that China, France, and Israel have free-wheeling and unregulated arms exports policies that are only sometimes reined in by their governments since these same governments want to boost high-quality exports and sustain their national champions. I think India is doing the same but is still in the early stages.”

Miranda believes that when it comes to the Astra Mk-I in particular, it will help if the Indian government had a list of all-weather friends who have unlimited access to the best Indian military technology. He highlighted that “this is how the USA does it. The Russians have done the same to India for decades…and it has been very profitable!” In Miranda’s view, the questions that need attention at this point relate to who India’s long-term friends are and whether they need premium AAMs.

While there is consensus amongst most experts about the missile’s export potential, the current timeline for domestic procurements means that the materialisation of this potential is a little farther away in the future.

(Shreya Mundhra is a New Delhi-based independent journalist covering conflict, politics & foreign policy. She Tweets @ShreyaMundhra_ and can be reached at  shreyya.mundhra@gmail.com. Aritra Banerjee is a New Delhi-based journalist working with Indian Aerospace & Defence and is co-founder of the online-military reforms think-tank Mission Victory India. He tweets @Aritrabanned and can be reached at aritrareporter@gmail.com. Views expressed are personal and do not reflect the official position or policy of Financial Express Online. Reproducing this content without permission is prohibited.)