Earlier this month he was announced as the next chief of the Naval Staff. He was serving as the Flag Officer Commanding-in-Chief (FOC-in-C) Western Naval Command. 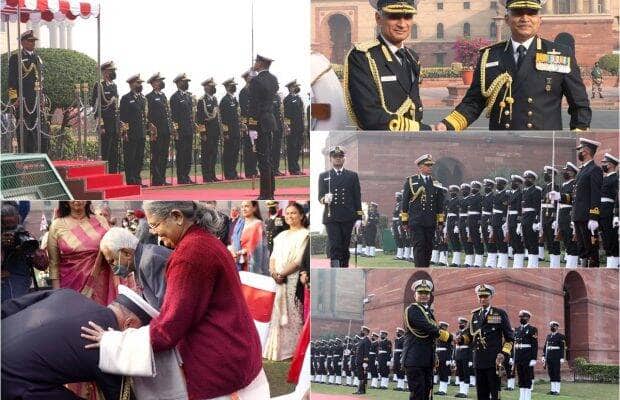 The new chief comes in at a time when the Indian Navy is in the process of revising its 15-year Maritime Capability Perspective Plan. (Images: Indian Navy)

The new chief comes in at a time when the Indian Navy is in the process of revising its 15-year Maritime Capability Perspective Plan. This plan is expected to be ready by the first quarter of 2022 and will be aligned with the 10-year Integrated Capability Development Plan which is being presently formulated by the Department of Military Affairs (DMA).

More about the new chief

Earlier this month he was announced as the next chief of the Naval Staff. He was serving as the Flag Officer Commanding-in-Chief (FOC-in-C) Western Naval Command.

A gunner specialist, he is the fourth Navy Chief who commanded INS Ranvir, a Rajput class guided missile destroyer.

An advocate for Integrated Theatre Command, he has played a very important role in drawing up the concept as the Chief of the Integrated Defence Staff.

He is the first Navy Chief who hails from Kerala and he has commanded the aircraft carrier INS Viraat and other surface vessels. Born in 1962, the new chief is a graduate from National Defence academy and was commissioned into the Indian Navy on January 1, 1983,

Challenge One: The new chief will have to tackle the problems related to Project 75 (I) which has run into a problem as some vendors who had received the RfP have withdrawn from the race. This was the first project under the Strategic Partnership (SP) model for the Indian Navy. The new conventional submarines are expected to be equipped with the Air Independent Propulsion System (AIP). And the vendors were required to offer functional AIP.

What does this mean for the Indian Navy?

It means that during the tenure of the former Chief, almost three years were taken before an RfP was issued. And citing issues related to the RfP most of the OEM contenders have withdrawn.

As has been reported earlier, there were five potential vendors in the race including the French Naval Group, Rosoboronexport of Russia, Spanish Navantia, Thyssenkrupp Germany and Daewoo Shipbuilding & Marine Engineering Co (DSMC) South Korea.

Under the SP model, two Indian builders were identified to construct 6 submarines under the Project 75 (i) – Mumbai based MDL and L&T. These two are expected to hold discussions with the shortlisted vendors and place the best offer to the Ministry of Defence & the Naval Headquarters. However, some OEMs have withdrawn from the race. This means, a fresh RfP has to be issued.

Challenge Two: He comes in at a time when the Chinese Navy is already expanding its presence in the Indian Ocean Region (IOR). And to deal with the emerging threats more deployment will be required.

Challenge Three: Indigenous Aircraft Carrier II. The Indian Navy urgently needs another aircraft carrier. And the process for building one has to be taken at the earliest as the whole process to build, test and then commissioning will take at least a decade plus.

Challenge Four: Still awaiting CCS approval for SSNs. SSN is a nuclear powered attack submarine and it is armed with non nuclear weapons.

Challenge Five: A decision has to be taken for a carrier borne fighter jet. India is the second biggest operator of 110 MiG-29s which are being flown by the Indian Air Force and the Indian Navy.

The MiG-29Ks being flown by the Indian Navy have to undergo modification and India and Russia are engaged in discussions.

Challenge Six: Though the Indian Navy is soon going to receive MH-60R Helicopters which will play a critical Anti-Submarine Role, there is an urgent requirement for 111 Naval Utility Helicopters which are going to replace the old Chetaks that are being operated. These helicopters are to be acquired under the Strategic Partnership Model.

Due to budgetary constraints, the Navy has had to scale back its plans to have 200 ships and it is now expected to have 170 ship force. Construction of 39 ships and submarines is going on at Indian shipyards, and two frigates are under construction in Russia.

Compared to China which commissions almost 20 warships every year, however, India has not managed to replace the retiring warship and keep pace with China.

While India has still not decided if IAC-III is required or not, based on the information available, China is in the process of launching its third aircraft carrier which will come with a catapult technology.

According to a US Defense Department report, the Chinese Navy has a battle force of around 355 ships and submarines, including more than 145 major surface vessels. By 2030 it is expected to operate around six aircraft carriers.

His focus is also expected to be on continuing with the Navy’s approach on interoperability with other navies globally. And more multilateral and bilateral naval drills to further strengthen maritime security in the IOR as well as focusing on Underwater Domain.

At the end of all the Ceremonials, the new chief hugged his mother.