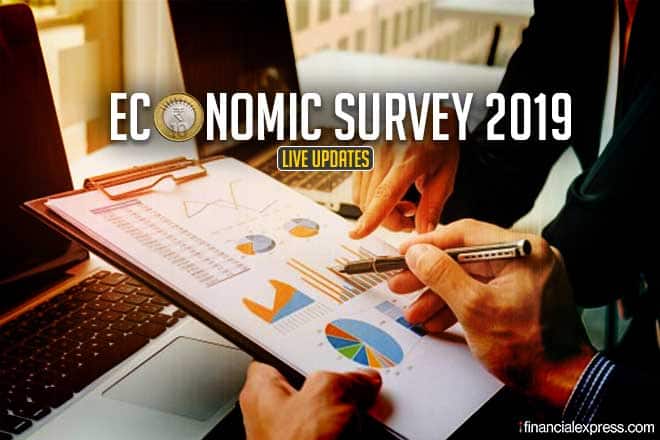 Economy Survey of India 2018-19 Highlights: The Economic Survey report 2018-19 has projected India’s FY20 economic growth rate at 7%. Coming just a day before India’s Budget 2019, the Economic Survey showed the health of the Indian economy and projected India’s economic growth for the fiscal year 2019-20. All eyes were on Budget 2019 and Economic Survey 2019 after a recent data released by the government showed a slump in GDP growth rate and high rate of unemployment in the country. The Economic Survey revealed signs of India’s economic revival and challenges ahead. It showcased the health of various indicators like jobs, farm sector, manufacturing, services, education, etc.

The Economic Survey is an important event right before the Union Budget 2019. An annual financial document, the Economic Survey generally analyses everything that happened with the country’s economy in the last financial year. It summarize the country’s economic health, performance on govt’s key programs, and points to the prospects of the economy. The detailed statistical data that encompasses macro and sectoral aspects give economists a deep-dive into the state of Indian economy.

Also Read
TDS on Cash Withdrawal from Banks/Post Offices: Here’s what Budget 2022 can do to give relief to taxpayers
House Rent Allowance: ‘Expand metro cities list for 50% HRA exemption calculation for salaried in Budget 2022’
Employer’s NPS contribution of 14% for state and central government employees proposed by FM
Public Provident Fund: Get Rs 80 lakh after just 15 years if this Budget wish is fulfilled!

According to the Economic Survey 2019, over the last 70 years, the minimum wage system in India has expanded and has become more become complex. Click here to read more

Production of milk has been rising at an increasing rate, the change in its price shows a fluctuating trend. After rising 9 per cent in 2014-15, it increased only by 2.91 per cent in 2016-17

Economic Survey 2019 reveals that is India is a low-inflation economy, officially

One of the key policy focus areas is controlling the inflation. The govt has taken steps such as monitoring inflation regularly, giving advisories to the states against black marketing and hoarding, regular review meetings on prices and making sure the availability of key commodities to keep the inflation in check. Click Here to Read More

Economic Survey 2019: How to make economic policies work as they are intended to?

Making policy actions predictable should be the govt’s priority and they should provide guidance and check economic policy uncertainty. These things greatly influences investments, domestic as well as foreign, in Indiaas per the Economic Survey for 2018-19. Click Here to Read More

“The Economic Survey 2019 has set the broad aim of achieving a sustained higher growth and the framework needed to achieve it. The primary idea of linking private investment, productivity, demand generation, exports, and job creation in order to achieve a sustained 8% real GDP growth could go a long way if followed in earnest in policy making. The focus on MSME sector was much needed as bulk of the job creation and growth support needs to come from this segment,” said Suvodeep Rakshit, Senior Economist, Kotak Institutional Equities.

“We welcome the positive news presented in the first Economic Survey of the second tenure of Modi government put forth by Chief Economic Adviser Krishnamurthy Subramanian. The GDP growth rate at 7 per cent in the financial year 2020, up from the 6.8 per cent last year is an affirmation towards the continued joint efforts taken by government and India Inc.,” Niranjan Hiranandani- National President- Naredco and Sr.VP – Assocham said.

“The GDP growth has been seen picking up on higher private investment and robust consumption. It added that MSMEs need to be seen as a source of innovation, growth and job creation. It must be made free from the shackles that convert them into dwarfs.  This shows the intent and commitment of the government in the key growth areas. The survey affirms that investments would be a key driver with micro, small and medium term business being the key focus area,” he added.

The Modi government should ensure that the policy actions are predictable and provide guidance in order to check economic policy uncertainty, which greatly influences domestic as well as foreign investments in the country, the survey said.

The upcoming 5G technology is an opportunity for Indian industry players to reach out to global markets while building a digital payment, knowledge and services economy, according to the Economic Survey 2018-19.

The rate of inflation rate moved to more stable and low level in the last five fiscals, and controlling price surge remains a key policy focus area of the government, the Economic Survey for 2018-19 said.

The growth of the Indian economy will depend upon the ability to provide affordable, reliable and sustainable energy to citizens and the country is required to raise per capita energy consumption by at least 2.5 times to increase per capita income by $5000, the economic survey tabled in Parliament said.

If the impact of stress in the non-banking financial company (NBFC) sector spills over to this year as well, it may lead to lower credit offtake from NBFCs, which may dampen growth in consumption spending,, CEA said in the survey.

The political stability in the country should push the animal spirits of the economy, while the higher capacity utilisation and an uptick in business expectations should increase investment activity in 2019-20, the survey said.

Economy is now poised to take off and India has grown faster than other economies, says CEA in his presentation on economic survey.

China’s savings rose as the proportion of its working population rose, India’s demography in next 2 decades will enable a virtuous cycle of 8 per cent growth, adds CEA K Subramanian.

An effective minimum wage policy that targets the vulnerable bottom rung of wage earners can help in driving up aggregate demand and building and strengthening the middle class: CEA K V Subramanian

India ranks poorly compared to other countries when it comes to ease of contractual enforcement. The problem of backlog of cases in courts is not insurmountable, can be solved within 5 yrs through productivity improvement & working during vacation: CEA K V Subramanian

Firms that over time grow large are significant contributors to employment and value; need more focus on firms to reap economies of scale, rather than on firms which remain slow despite their age: CEA K V Subramanian

One of the key things we are witnessing today is the power of Data, it can be particularly life-saving in rural areas when information is made accessible to the common man. Banks use fin tech to screen farmer’s loans. Data can be visualised as a public tool, governments need to recognize and invest in this for growth: CEA K V Subramanian

Labour reforms provide one of the key constraints. We looked at the reforms that Rajasthan undertook as compared to other states. Be it number of workers and total output per factor has increased in Rajasthan – a key aspect to focus on for policy nudges: CEA K V Subramanian

When we consume a subsidy, are we depriving someone else who deserves the subsidy more? As citizens, our duty matters a lot, not just our rights, to enable change in our economy: CEA K V Subramanian

Economic Survey 2019 LIVE: CEA KV Subramanian on what needs to be done for #Economy5Trillion

Increase in investment rate brings down unemployment. We are making key departure from the idea of thinking an economy as either virtuous cycle or vicious cycle, says CEA

Theme that underlies this Economic Survey is, the sky blue colour, the colour used for the survey, captures unfettered blue sky thinking which is what we’ve indulged in trying to come with the idea for this survey.

India will enjoy the “demographic dividend” phase in the next two decades but some states will start transitioning to an ageing society by the 2030s: CEA K V Subramanian

Economic Survey 2019 presents the outlook for the next 5 years

“Job creation is driven by this virtuous cycle of savings, investment and exports. While the claim is often made that investment displaces jobs, this remains true only when viewed within the silo of a specific activity. When examined across the entire value chain, capital investment fosters job creation as the production of capital goods, research & development and supply chains generate jobs.”