Amid widespread expectations that RBI may further cut interest rates, the International Monetary Fund has said the central bank may require a “tight monetary stance for longer”. 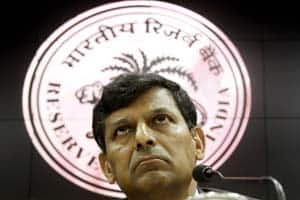 No RBI repo rate cut was effected in the monetary policy review today with the status quo retained at 6.75% and reverse repo rate at 7.75%. RBI Governor Raghuram Rajan did indicate an accommodative stance saying with 'inflation moving closer to the target' there would be more room for rate cut to support growth.(Image Source: Reuters)

Amid widespread expectations that RBI may further cut interest rates, the International Monetary Fund has said the central bank may require a “tight monetary stance for longer”.

With Finance Minister Arun Jaitley sticking to the fiscal deficit target of 3.5 per cent in the Budget for 2016-17, there are rising expectations that the central bank might ease interest rates during its policy meet next month.

In its staff report on the India, IMF said the monetary stance remains appropriately tight for achieving near-term inflation objectives.

IMF said that given upside risks to inflation, a re-emergence of inflationary pressures may require monetary tightening.

“Reducing still-high household inflation expectations will require a long period of low inflation which, unless underpinned by durable measures to boost food supply, may require a tight monetary stance for longer,” IMF said.

Meanwhile, the multilateral lender has projected a robust growth rate of 7.3 per cent for the country this fiscal, picking up to 7.5 per cent next year.

The staff report was prepared for the IMF Executive Board’s consideration on February 12, 2016, following discussions that ended on December 15, 2015, with the officials of India on economic developments and policies.

Based on information available at the time of these discussions, the staff report was completed on January 27, 2016.