Economic Survey for 2015-16: . The survey has termed external environment as challenging but projected a 7-7.5 per cent GDP growth rate in the next fiscal which could accelerate to eight per cent in a couple of years. 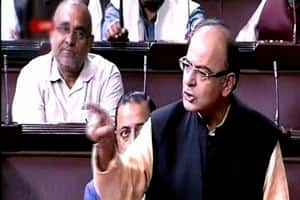 Economic Survey for 2015-16: Finance Ministry Arun Jaitley tabled the survey that gives a status report on the economy. (Photo: PTI)

Finance Minister Arun Jaitley on Friday tabled Economic Survey 2015-16 in Parliament. The Economic Survey has termed external environment as challenging but projected a 7-7.5 per cent GDP growth rate in the next fiscal which could accelerate to eight per cent in a couple of years.

-Informal sector has  created  jobs and keeping unemployment low
– Schemes such as Pradhan Mantri Suraksha Bima Yojana (PMSBY), Pradhan Mantri Jivan Jyoti Bima Yojana (PMJJBY), and the Atal Pension Yojana(APY), – were launched in 2015 in the insurance and pension sectors for creating a universal social security system for all Indians, especially for the poor and the underprivileged
India can become the leading investment destination owing to its robust macroeconomic fundamentals
Reserve Bank of India will meet 5 per cent inflation target by the end of March 2017
– Reform package for the fertilizer Sector
– Rates of 8% or higher possible in next 2 years, given macroeconomic stability
– Indian Equity market relatively resilient compared to other major emerging market economies
– Impressive strides made in the power sector in the last two years
– Economic Survey projects 7.6 per cent economic growth rate in 2015-16
– Economic Survey highlights the importance and potential of spreading JAM Trinity across the Indian economy
– India ranks first in milk production, accounting for 18.5% of world production
– Medium-term growth trajectory at 7-7.75% with downside risk. Downside risk to medium term growth due to global economic condition
– Economic Survey projects 7.6 per cent economic growth rate in 2015-16
–Amidst gloomy international economic landscape, India remains a haven of stability
– Upcoming budget and economic policy will have to contend with an unusually challenging and weak external environment
– Increase in wages recommended by the 7th Pay Commission not likely to destabilise prices, will have little impact on inflation

#Ecosurvey2016 : For those allergic to graphs, here are #EconomicSurvey‘s key points, in reader-friendly format… pic.twitter.com/6GaaYNOBJ9