With this background, the finance wizards of Railways have created an action plan to exorcise the CPC bogie deftly next fiscal without hiking either fares or freight rates. 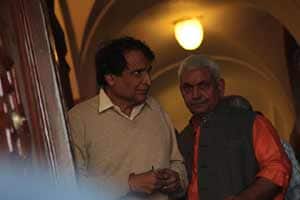 Brushing aside Opposition charge that the rail budget has nothing for poor, Railway Minister Suresh Prabhu today said it had "everything for the common man", as he unveiled a three-pronged strategy including an austerity drive to revitalise railways. (Express Photo)

The Rail Budget this year was prepared under the shadow of the 7th Pay Commission, whose impact is looming on Railways and threatening to make its already dwindling finances haywire. Suresh Prabhu mentioned the Central Pay Commission (CPC) impact as one of the two headwinds before Railways. The other one being a tepid economy.

With this background, the finance wizards of Railways have created an action plan to exorcise the CPC bogie deftly next fiscal without hiking either fares or freight rates. The trick lies in splitting the impact into two parts. Of the Rs 28,500 that is the overall impact, the supposed impact of the allowances — the increase in basic pay and pension is known — is not yet finalised by the Centre and a committee is looking into it. Other than that, impact on the basic pay and the pension, this year Railways has to foot a bill of only Rs 12,000 crore extra as part of the CPC liability. This makes the impact look far less scary for one budget year. It has budgeted around Rs 1,23,560 crore as the Ordinary Working Expenses (which mainly include salaries, pension and fuel bills). On the positives, this year Railways has saved Rs 8,700 against its budgeted Ordinary Working Expenses of Rs 1,19,410 crore last year. The next fiscal will similar savings on account of austerity measures and reduced fuel bills.

Therefore, this year, it has budget for an extra Rs 12,870 crore as Ordinary Working Expenses — of which only Rs 12,000 crore is the money earmarked for the CPC impact. Much of the increase in salaries and pension also attracts arrears of past years. There is a possibility that Railways can split the payment of the arrears to soften the blow, sources said. Years ago, Railways had split the 6th Pay Commission payout into two years to absorb the impact.

“Since the allowances recommended in the Pay Commission have not been yet been finalised by the government, we will take a call on them when they comes in,” Railway Board Financial Commissioner Sanjoy Mookerjee told The Indian Express.