Viewers takes to movies on TV and on OTT 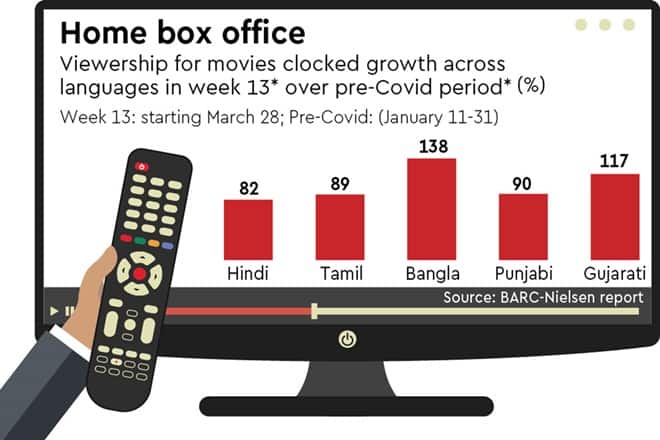 Ad volumes for movies saw a drop of 43% during week 14 as compared to the pre-COVID period, according to BARC- Nielsen Report

At a time when avenues for outdoor entertainment are closed, consumers have no choice but to turn towards television and OTT platforms. Movies have emerged as the favourite content genre among audiences, especially, as television channels have no fresh content and are relying on re-runs.

As per a recent report by Broadcast Audience Research Council (BARC) India and Nielsen, television and smartphone consumption during the lockdown period reflected a growth of 73% for films in week 14 (starting April 4) as compared to the pre-COVID period (January 11-31). OTT players alone, as per the report, saw more than 50% rise in time spent on watching movies on their platforms in week 14 as compared with pre-COVID times.

The growth in viewership is led by a rise in non-prime time viewing by audiences, and according to the report, there has been an increase in late-night watching of movies during the lockdown.

“Earlier, people used to watch television in different sessions, with the longest one being prime time in the evening. However, this has changed as people are staying indoors and have uninterrupted viewing time,” says Paritosh Joshi, media consultant and principal, Provocateur Advisory.

According to Rohan Lavsi, head, Colors Cineplex, Viacom18, ever since the lockdown, the non-prime viewership on its channel has increased twice more than primetime viewership. Consequently, movie channels are now curating their content to tap this trend, and are broadcasting popular movies across the day and not limiting them to just prime time.

“We used to play blockbuster content only in the 7-9 pm and 9-11 pm slots, but now we have boosted content throughout. We are focused on enhancing viewer experience by offering the best of Hollywood titles,” says Vivek Srivastava, president- strategy and business head, English entertainment cluster, Times Network.

Zee’s movie cluster has seen an uptake in family-oriented content. “The biggest trend has been the comeback of comedy films and family dramas like Gadar: Ek Prem Katha and patriotic films like Holiday, as opposed to the predominantly action genre-led performance over the past few years,” says Prathyusha Agarwal, chief consumer officer, Zee Entertainment Enterprises.

Zee’s OTT platform, however, has seen a surge for genres like romance and thrillers. “Some of the most popular movies on our platform are hits such as Dream Girl, Uri: The Surgical Strike and Simmba. We are also seeing viewership for some of our recent launches like Commando 3, Operation Parindey and Hacked,” says Archana Anand, chief global officer, Zee5. The platform claims to have globally registered a three-fold spike in viewership and watch-time for movies as compared to early March.

Though the viewership is at an all-time high, media companies are not able to translate it into revenues, as most brands have scaled down advertising. According to the BARC-Nielsen report, ad volumes for movies saw a drop of 43% during week 14 as compared to the pre-COVID period.

Jehil Thakkar, partner (media and entertainment), Deloitte India, says while the partial opening of the economy might bring back some advertisers, rates will continue to be low, as P&Ls of most companies are under stress. The viewership, he adds, will continue to grow and going ahead some production houses might release movies on TV and OTT given that theatres will remain closed in the coming months. MX Player, for instance, is already in talks with production houses for the release of movies on its platform.