MX Player, which started off as an AVoD service, is experimenting with an affordable subscription plan 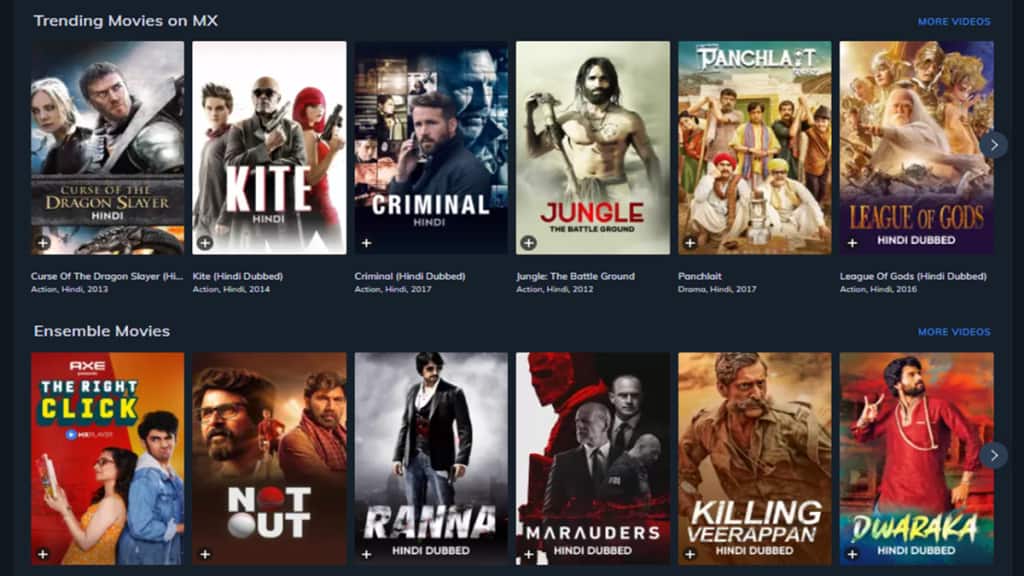 In February 2020, MX Player made a strategic addition to its mobile application — gaming.

MX Player claims to have 200 million monthly active users (MAU) in India, and hit one billion downloads in October this year. The platform was acquired by Times Internet in 2018 for $140 million. It has since attracted $110.8 million in investment from Chinese internet major Tencent.

Aashram, a crime drama starring Bobby Deol, is one of its tentpole shows. Other originals on the platform Ek Thi Begum, Bhaukaal, and Matsya Kaand have similar racy and dark themes, and are all set in the small towns of North India. Apart from its original shows, another major driver of viewership on the platform is its slate of international and regional content that is dubbed into Hindi.

The ad-supported nature of the platform combined with its choice of content indicates that MX Player is after a non-urban audience that is not being served by international subscription-only platforms like Netflix and Amazon Prime Video, as well as other broadcaster-backed video streaming apps that put their original content behind paywalls.

“We built MX Player as an AVoD service and have aligned our entire business model to go after the masses,” says Gandhi. But he maintains that the audience is not limited to tier II and III markets alone. The platform is going after affordable Android smartphone users in metro cities and beyond. Media buying executives estimate that more than 50% of the platform’s audience resides in non-metros, and about 80% of the app’s user base is male.

In February 2020, MX Player made a strategic addition to its mobile application — gaming. The platform hosts over 100 hyper casual games that also present a monetisation opportunity. MX TakaTak, a TikTok clone, also resides within the MX Player app in addition to being a separate app.

Tim Mulligan, EVP and research director, MIDiA Research, points out that adopting a multi-pronged content strategy along with bundled offerings is the direction international platforms are taking, too. The Apple One subscription includes Apple Music, Apple TV+, Apple Arcade and iCloud+. Netflix, too, introduced games on mobile devices this year. “The friction points of digital adoption are around the ease of access and the cost of service. Having a one-stop solution for both reduces friction and increases retention,” Mulligan says.

Interestingly, the subscription service does not put any content behind paywall. Gandhi says that the company has taken a feature-based approach to the paid service. “The SVoD offering is meant for the platform’s loyal audiences who seek an ad-free viewing experience,” he adds. Subscribers who wish to watch content for free get access to original content three to four weeks after the show’s premiere.

Shailesh Kapoor, founder and CEO, Ormax Media, says that opting for a hybrid revenue model is necessary for platforms like MX Player, because advertisers spend the majority of their digital ad budgets on platforms like Google, YouTube, Facebook, and Instagram. As per the FICCI-EY Media and Entertainment Report 2021, only 13% of all digital ad spends go to OTT platforms.

According to the Ormax OTT Audience Report: 2021, India’s digital video audience stands at 353.2 million, of which paying subscribers account for 110.5 million. Analysts say Indian audiences have greater tolerance to advertising. “Unless a show is very highly anticipated, such that people would want to see it as soon as it premieres, the early access model is not a unique proposition,” Kapoor notes.

Gandhi says the initial response to the subscription offering has been encouraging. But is the pricing sustainable? “There will be a considerable amount of pricing innovation that we will bring in to cater to the entire pyramid of our user base,” he says.