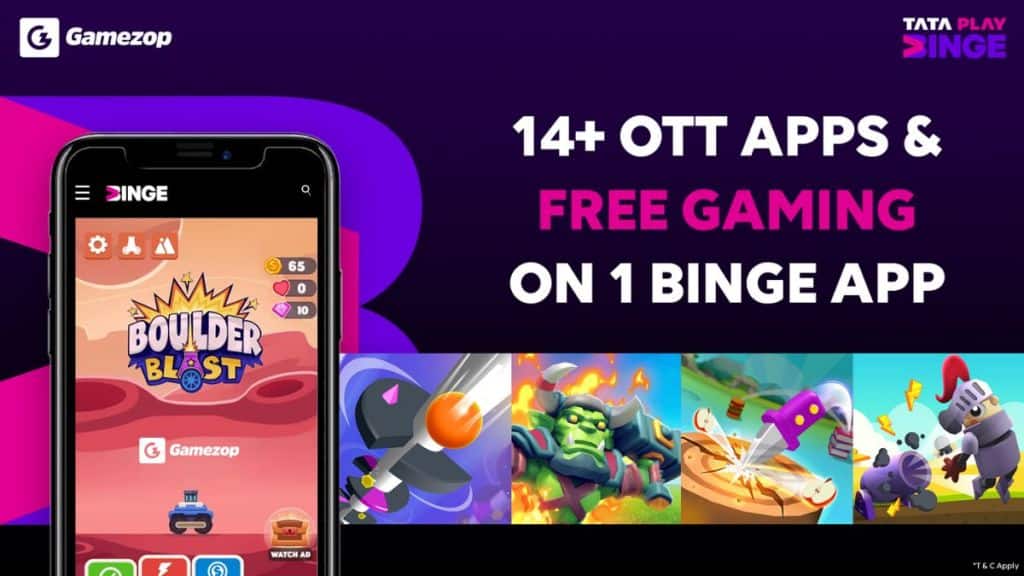 Tata Play has introduced a new vertical on Tata Play Binge in partnership with Gamezop, to provide the users access to 100 games on the platform. On the Tata Play Binge app, users will now be able to play games such as Boulder Blast, Bowling Stars, Bottle Shoot, Tower Twist, Bubble Wipeout, Carrom Hero, Ludo With Friends, Colour Chase, and City Cricket. The games will work within the Tata Play Binge app and will not need to be installed separately.

Tata Play Binge is offering 17 over-the-top (OTT) apps under one roof, and will further add another dimension to it with the partnership with Gamezop, Pallavi Puri, chief commercial and content officer, Tata Play Ltd, said. “With this new development, we want our users to enjoy gaming under a unified platform. We want Tata Play Binge to be synonymous to all things entertainment and this step is a logical progression in the same direction,” she added.

According to the company, the games will be accessible through a dedicated tab and featured alongside movies, shows, and sports on the Tata Play Binge app. The company claims that it will continue to work closely and identify opportunities to both make gaming more rewarding for the users and replenish the catalogue with new titles every quarter.

“The partnership will let us take Gamezop to households across the country. Our company has always pushed to bring casual games for users,” Ankit Saxena, chief revenue officer, Gamezop, said. “With this strategic alliance, Gamezop will serve as the exclusive gaming centre within the Tata Play Binge app and sit next to other OTT platforms,” he highlighted.

Follow us on
Latest News
Bank Holidays in November 2022: Banks closed for up to 9 days in various cities in November; check list
Stock market holidays November 2022: Trading on BSE, NSE to remain suspended on this date this month
Petrochemicals industry to act as catalyst to realize India’s $5-trillion-dollar-economy vision
Assembly polls: Gujarat’s tribal belt, a bastion of Congress that BJP striving hard to conquer
Road not built because someone had thrown a shoe at CM: Prashant Kishor’s fresh jibe at Nitish
Five prominent Indian-American politicians in race for US Congress in midterm polls
What is the Future of Mobile Marketing
Photos
Heart-wrenching! Here is a look at Morbi and the suspension bridge that collapsed
5 days agoOctober 31, 2022
In Pictures: PM Modi in Kargil to celebrate Diwali with soldiers, says, ‘All of you have been my family for years now’
2 weeks agoOctober 24, 2022
In Pictures: PM Modi inaugurates Deepotsav in Ayodhya; World record set by lighting of over 15 lakh diyas
2 weeks agoOctober 24, 2022
Read More
×
India shielded from social media ad troubles, for now
Manuj Khurana quits Tesla; joins electric scooter startup Ather Energy Pvt
Revenant Esports signs up Cybeart as its official chair partner
Pass Pass Pulse launches ‘Pulse Candy Hunt’ on Candy Day
Retail Tech Arzooo witnesses 400% jump in sales of white goods during festivities
Omnicom Media Group India assigned integrated media mandate for Electrolux