The fourth-generation Yamaha R15 comes with a new design but retains the same engine and gearbox setup. There are other subtle tweaks and changes sprinkled around the bike in the form of new features. But is this enough to justify the price hike? 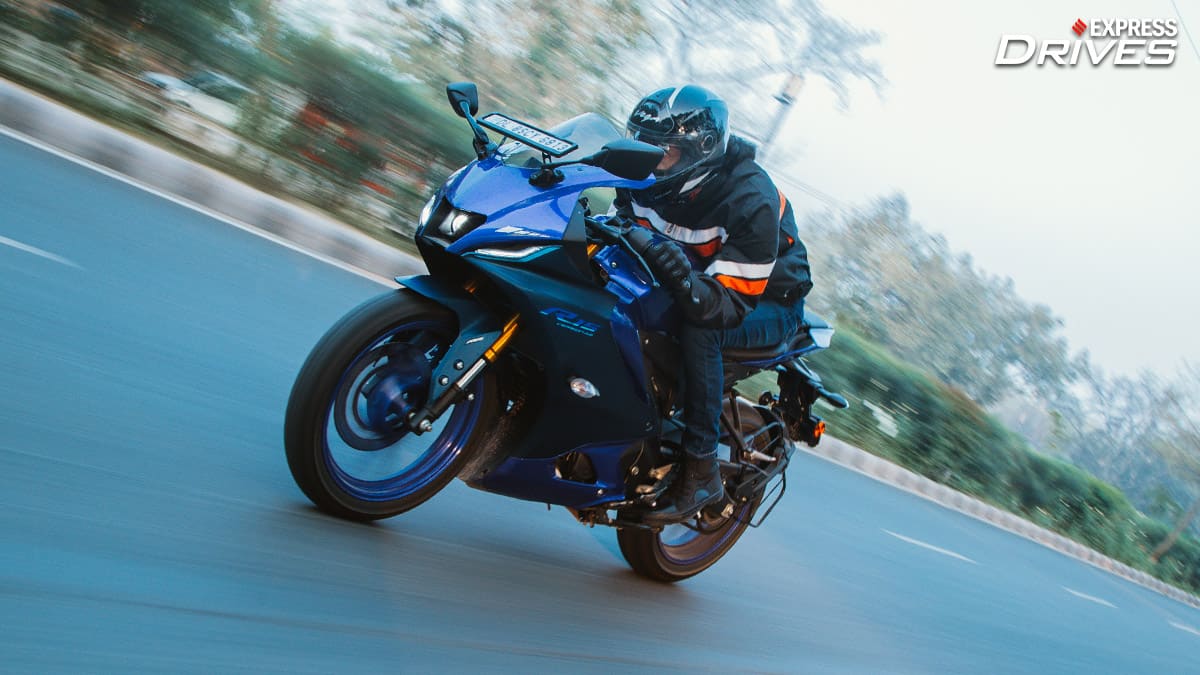 There is a high chance that if you are reading this review, you must have dreamt of owning a fancy sportsbike someday. You must have daydreamed about scraping your knee on the tarmac of a racetrack as you follow the racing line through a corner. While some of you might be on your journey to reach that goal, others might not have that luxury or simply have found other things that take their time. However, all is not lost. Just like how some of us substitute a trip to Switzerland with a trip to Shimla, you can trade in your imaginary R7 for a real-life R15 V4.

Inspired by the giants!

Yamaha has focused heavily on updating the looks of the R15 V4 when compared to the previous iteration of the bike. In fact, I would go so far as to say that this is the biggest change. I loved the sharp looks of the V3 and it was almost impossible to imagine an even better design than that. But Yamaha did actually come out with an even cooler design. You can see the similarities between the V4 and its elder sibling, the R7. The front houses a new headlamp setup with an LED projector lamp in the middle and LED DRLs on either side. This has turned the R15 into a meaner looking machine. If you look at the fairing, gone are the multiple cuts in favour of a more harmonious and unbroken surface. Something that let me down on the V3 was the fit and finish quality and how some panels felt of lower quality. I am glad to report that Yamaha has also upped the game in terms of quality. The tank panel, switchgear, body panels, all of it feels premium and worth the price you are paying for this machine.

Also Read
TVS Raider 125 First Ride Review: Can it ‘Shine’ with all that ‘Glamour’?
2022 TVS Ronin First Ride Review: A new reign of the Ronin
2022 Maruti Suzuki Brezza First Drive Review: Breeze before the storm
10 years of Toyota Fortuner in India: Why Indians love the Fortuner like crazy

The V4 also gets a new instrument cluster that has subtle differences compared to the old one. While the V3’s display was shorter in height and wider, the new unit goes the opposite way. It is not as wide but is taller for sure. This almost squarish cluster has more room to display all the information neatly. You also get a lap timer this time around. The bike can show you your speed, rpm gauge, gear position, two trip meters, battery level and odometer. You also get an improved shift indicator. While the previous R15 had a single white light that would flash, indicating you to shift, the new one comes with 5 different lights. The closer you are to the redline, the more lights come on. Yamaha is also offering smartphone connectivity via Bluetooth, allowing one to access a rather limited set of features and functions.

Yamaha has not really made many changes in the engine department. You get the same 155cc, single-cylinder, liquid-cooled motor that was also found in the previous iteration of the R15. On paper, the power and torque figures have been changed, but not in a considerable way. I am sure that almost no one would have objected if Yamaha had supplied the R15 with a newer engine but this one is fine too. I loved this engine when I first rode the R15 V3 a few years back and I love it even now. This is an engine that feels at home when you reach revs that make most other bikes choke on their own exhaust gas. VVA (Variable Valve Actuation) helps the bike churn good performance no matter where you are in the rpm range. Find an open stretch of highway, open the throttle and just hear the engine sing when you cross 7000rpm. It is truly glorious and unlike anything in this category!

Having said all of that, I do feel that Yamaha could have tuned the engine to have a little more power below 5000rpm. When ambling in slow traffic or climbing the initial three gears, you do feel that the bike needs to be worked harder. Thankfully, despite all of this, I did not have one instance of the bike stalling. In fact, you can still cruise or do low speeds while you are in the 5th or 6th gear.

Speaking of the gears, I had no complaints with the 6-speed transmission. The clutch lever is light but I am not a 100 per cent convinced about the usability of the Quickshifter in the city. Yes, if you take your bike to the track often, you might find some use for it. In my testing, I found the Quickshifter to be not the best in the business.  A new feature in this update comes in the form of a traction control system. This too is a feature that is not going to be of much use in most scenarios. I have ridden bikes much bigger than this that can ride just fine with the traction control disabled. Nevertheless, Yamaha has added the safety feature and it is there if you find yourself in a slippery spot.

How is the ride?

The suspension setup is slightly stiff but if you have a decent build, it will cushion a lot of the bumps too. Since I weigh less than a packet of chips, I did find going over bad roads or traversing a sudden pothole a bit painful. Having a pillion helps with this but pillion comfort wasn’t great on the V3 and the V4 is no different. Yamaha has finally equipped the Indian version of R15 with USD forks at the front and they look good and ride even better. Altogether, the bike feels stable and planted through the corners. It does not take a lot of effort to switch lanes quickly and the tyres do a fantastic job of working with the suspension.

Even though you get disc brakes on both ends and dual-channel ABS, I feel that this is one aspect Yamaha could have improved upon. The front brake is actually adequate and will be fine for most occasions but the rear brake lacks initial bite. Slamming on the brakes will make the ABS kick into action a little too aggressively, in my opinion. Altogether, the brakes are fine for usage in normal city riding, but considering the potential that this bike has, a more potent setup would have been much appreciated.

The new R15 V4 is like the Batsuit to your Bruce Wayne. It might not pack the might of Superman, but it can still get you an entry into the Justice League, should you be capable enough. The looks are definitely the biggest selling point of the V4 because it has a proper sportsbike silhouette. A refined and powerful engine and precise handling have been key characters of the previous iteration of the bike and have been neatly transferred to the new one as well. Prices have gone up with this update and the bike now has a starting price of Rs 1.75 lakh that goes up to R 1.85 lakh (ex-showroom) if you opt for R15M. If you want quantity over quality, there are many other options you could be looking at. But if you want to have a taste of what professional racers feel like when they get on their racing machines, there is no better option in this price bracket!