TVS Apache RTR 200 4V Race Edition 2.0 gains some improvements over the standard RTR 200 and we have ridden it recently to find out if the changes on the new model are worthy enough to demand extra cash or not. So, is this the best 200cc motorcycle in India at present, let’s find out! 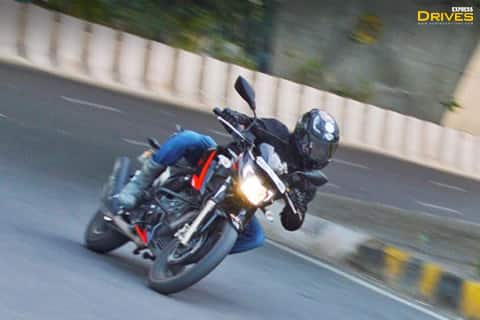 TVS Apache has been around since 2006 and the Apache family is now 3 million strong worldwide. My mind recalls the first memories of the TVS Apache as the only one to challenge the dominance of Bajaj Pulsar, a name about which almost every youngster liked talking about those days. Starting its journey with the TVS Apache 150, the Apache family currently has five members that are classified into further variants. We recently rode the fastest RTR yet – the RTR 200 4V Race Edition 2.0 which is an improved version of the standard RTR 200. TVS Apache RTR 200 has always been a preferred and popular name in the 200cc sub Rs 1 lakh segment and the Race Edition has indeed taken things up a notch. Here is what else fruitful the RTR 200 Race Edition brings to the table and if it is the best 200cc motorcycle in India at present.

The new Race edition essentially looks like the standard model apart from the few elements that make it look sportier and more upmarket. For instance, the bike gets a new flyscreen upfront that is not present on the regular model. The front continues to get the sharp headlamp with LED pilot lamps having ‘devil horns’ shaped glowing pattern. You also get new racing decals with the Race Edition that makes the bike appeal more to the eyes than the standard model. Apart from this, the front forks on the new TVS Apache RTR 200 4V Race Edition 2.0 get fork protectors as a welcome change. The fuel tank remains unchanged with sharp edges and lines along with the crisp tank extensions that make the overall bike look aggressive.

Also Read: How your two-wheeler tyres are made: TVS Tyres Reviewers Meet 2018

The tank gets an off-set cap just like the RTR 160 4V and standard RTR 200, coming across as another visual highlight. The rear end of the motorcycle features an LED headlamp along with split rear body grab rails. Overall speaking, the TVS Apache RTR 200 Race Edition is a pure looker from almost every angle but in my opinion, that flyscreen up front can come across as a compromise to those who want pure naked streetfighter looks. Nonetheless, the RTR 200 looks a class apart from its rivals and is easily the most modern looking bike in the segment.

TVS Apache RTR 200 Race Edition is offered in both carbureted and fuel injected versions just like the standard model and the two variants have a marginal difference in power output. The top end ABS variant in the Race edition series is being offered with a carburetor only and we got the same for the review. There is hardly any change in performance when compared to the standard model. The engine has a deep throaty note especially low down in the rev range and all thanks to the double barrel exhaust, this one is no doubt the best sounding motorcycle in the sub Rs 1 lakh motorcycle segment. The engine has a decent low and mid-range due to which the bike offers a quick acceleration and daily commutes in the city feel like a breeze. However, it is the top end that feels a bit disappointing and we also felt that the current sweet spot of 70-75 kmph could have been a little better had there been a sixth gear like its prime rival – the Bajaj Pulsar NS 200.

However, the Race edition has an upside to it. One prime change on the TVS Apache RTR 200 Race Edition is the inclusion of a slipper clutch. The Anti-Reverse Torque unit not only reduces the effects of engine braking considerably during aggressive downshifts but also makes gearshifts a lot smoother than the standard model. The gearbox, however, gave trouble a few times when it came to finding the neutral. While the overall performance of the motorcycle remains almost the same, you will feel the Race Edition a bit faster in situations like, say a drag race with the quick gearshifts due to the slipper clutch.

When it comes to fuel efficiency, the motorcycle returned a combined figure of close to 43 kmpl that included almost 60 percent city and 40 percent highway riding.

The TVS Apache RTR 200 4V Race Edition sits on a double cradle split synchro stiff frame and gets conventional telescopic forks up front along with a rear monoshock. The suspension setting is on a softer side and the bike handles quite positively around corners. The motorcycle has a commendable straight-line stability and feels composed even at triple-digit speeds. The riding position is not much aggressive so you do not need to worry about getting tired out over long distances.

The impressive handling of the RTR 200 Race edition is further complemented by the decent grip from the 90/90-R17 front and 130/70-R17 rear TVS Remora tyres, all thanks to which you will not feel losing out confidence even while going hard on sharp turns. A 270mm disc brake up front along with a 240mm completes the braking set up on the Race Edition. The brakes offer an impressive feedback and bite and you can rely on these in emergency situations. The bike is the only one in the segment to offer a dual-channel ABS (Anti-Lock Braking Unit) that works seamlessly in keeping you unharmed under panic braking.

Furthermore, the motorcycle offers a highly informative fully digital instrument cluster that gets a gear position indicator, lap timer, top speed recorder & more and these bits will leave you with an urge to live next to a racetrack. Another segment first on the Race Edition is the dual-channel ABS as the competition offers a single-channel unit at the moment.

TVS Apache RTR 200 Race Edition prices in India start at Rs 97,005 for the standard trim. Moving up the variant ladder, the Fi version costs almost Rs 12,000 more at Rs 1.09 lakh and lastly, the top end variant with an ABS can be yours for Rs 1.10 lakh but is only available only in the carb variant. All prices are ex-showroom, Delhi.

All said and done, while the TVS Apache RTR 200 Race Edition 2.0 might not be the most powerful bike in the segment as it lags a little behind the Bajaj Pulsar NS 200 in this regard, it compensates in other areas like handling and the comprehensive feature list that it offers. Moreover, the RTR 200 has always respected practicality and the Race edition offers much more than that with multiple segment first features and not to forget, the hard to resist aesthetics. The Race Edition has indeed made the RTR 200 even more desirable, further cementing its tag of most value for money offering bike in the segment.