After almost 10 months and over 5,100 km on the odo, our long-termer TVS Apache RTR 160 4V has certainly turned out to be a trustworthy companion. Here is how the bike is performing during its journey with us and if you should buy it! 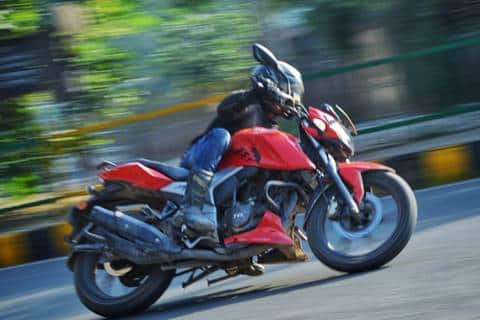 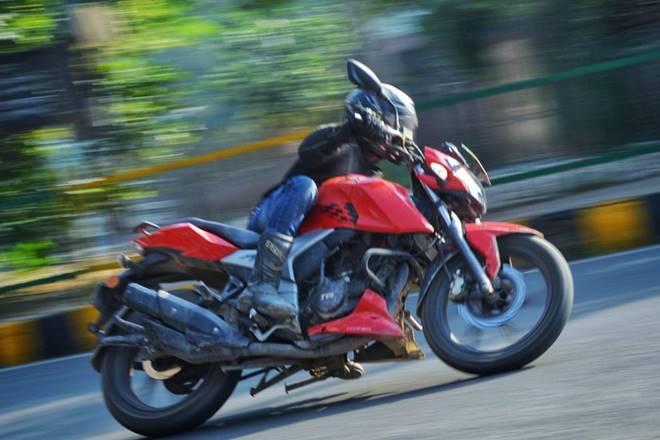 Putting 36 years of honest racing experience in the making of a mass market motorcycle certainly makes a difference and the TVS Apache RTR 160 4V presents a perfect example. We first rode it on TVS’ racetrack in Hosur exactly one year back and were impressed in terms of how much this 160cc motorcycle has to offer in multiple areas. This was indeed the reason that when TVS offered the Apache RTR 160 4V to us as a long-termer, we just couldn’t say NO. The new RTR 160 is in Express Drives’ long term fleet for over 10 months now and the bike has now seen itself in office commutes, weekend getaways, congested ‘Dilli’ streets and more.

After the odo reading clocked 2,000 km, I took the bike from my colleague Dipayan who was impressed with the motorcycle and was well enjoying its company. In the previous long term report, he wrote about how the new Apache RTR 160 makes for a good fun-to-ride motorcycle praising its riding dynamics. Taking things forward from there on, here is more on how this bike is to live with every day and if you should spend your money on it! 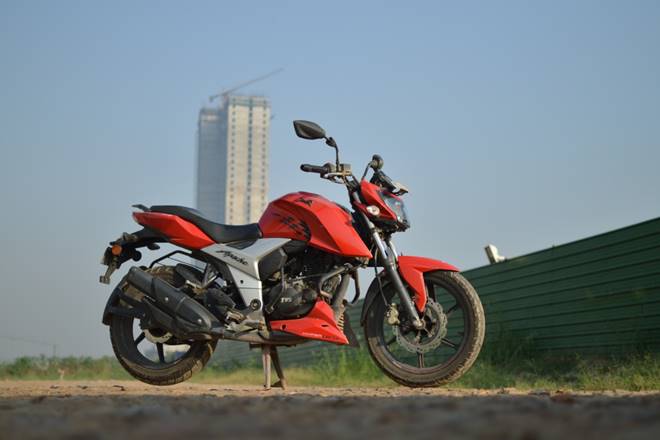 First, how is it to ride?

We have already spoken a lot about the design of the TVS Apache RTR 160 4V and its heavy resemblance with its elder sibling – the Apache RTR 200 in our previous reports. So let’s skip that part and start away with its ride quality. Built on a split cradle chassis which is 25 percent stiffer than the one on the standard RTR 160, the bike remains calm and composed in almost all scenarios. In fact, even at triple-digit speeds, the bike does not feel nervous or tends to lose its composure as it perfectly maintains its line. This indeed makes for a big bonus point once you are out on the highways and long distance trips.

The bike gets conventional telescopic forks up front along with a monoshock at the rear and these have been made with inputs from Showa. The set up works fine and filters the uneasiness of the ‘Indian’ roads rather easily. The suspension further aids in the brilliant handling of the motorcycle. The Apache RTR 160 4V is possibly the most confidence inspiring bike in the segment, the one that indeed urges you to go fast during corners. The bike feels ready to be leaned over and responds quick to directional changes. 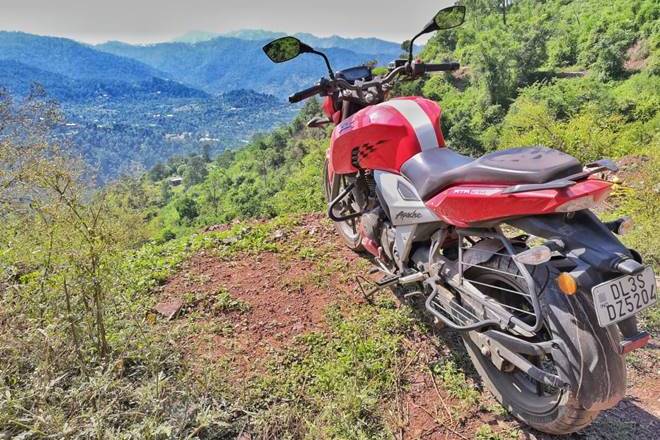 Last year, I took the bike to Solan in Himachal Pradesh and was impressed with its abilities to handle the corners and broken surfaces thrown at it. The twisties towards Solan are not really well maintained and you will find some really tricky corners on the way. In such a case, the 160 was not only responding quick while leaning from one side to another but it also gulped in the average sized potholes and broken patches without really transferring the impact to me.

The grip from the TVS Remora tyres is also decent that further helps in enriching the riding experience. Only on totally wet road surfaces, the tyres tend to lose grip but the performance doesn’t disappoints otherwise. The comfort level on offer is also satisfactory, all thanks to the wider and well cushioned seat and there is nothing to complain about even on the long hauls. 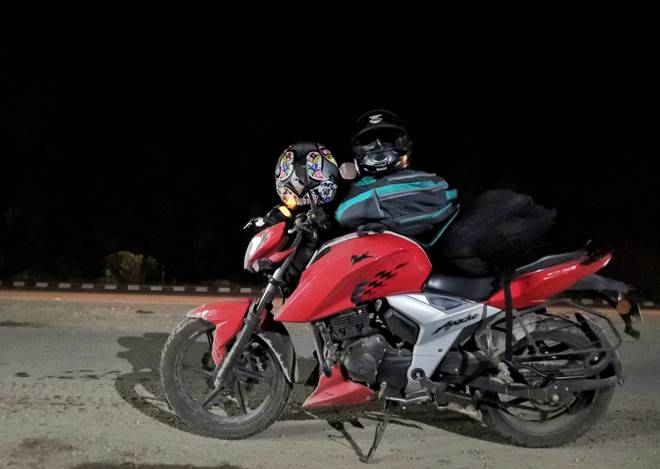 The RTR 160 4V gets an optional rear disc brake with the carb variant while on the Fi trim, it comes as standard. The braking performance is apt for daily usage and while the front set up offers an instant bite and feedback at the lever, it is the rear that is not at par with expectations at times. Our test unit is not fitted with an ABS but the bike has been updated with the said safety equipment recently that shall definitely improve the braking performance and of course take safety up a notch.

The 160 is one ‘Good at Heart’ motorcycle

TVS Apache RTR 160 4V draws power from a 159.7cc, single cylinder, oil-cooled engine mated to a five-speed transmission. The bike is offered in carb and Fi variants with a marginal difference in power outputs. We have the former with us with a peak power output of 16.2 bhp and 14.8 Nm of torque. All thanks to this number, the TVS Apache RTR 160 4V is the most powerful bike in its segment. Now, while there are many that do not like this motorcycle as it lacks that rawness and throatier exhaust note as the standard RTR 160 and 180, especially the BS-III models. The reason may sound convincing but that does not mean that the new RTR 160 4V is any boring or unexciting. 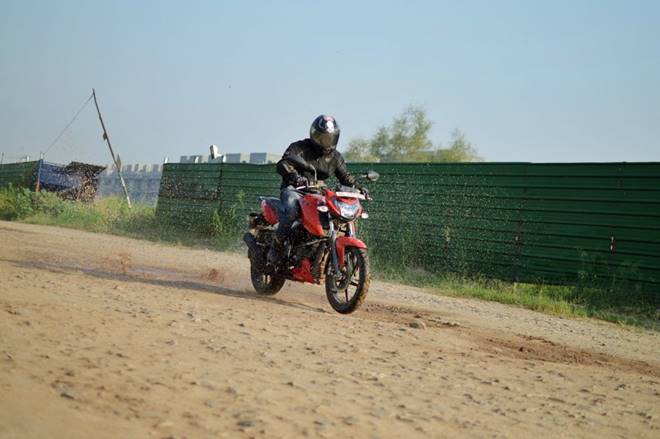 The engine has a solid mid range and past 3500 rpm, the bike just proceeds ahead with a lot of enthusiasm and eagerness. Also, considering the fact that this is a 160cc motorcycle, the vibration levels are surprisingly low and 70 to 80 kmph is the sweet spot of the engine. The motor feels supremely refined and the gearshifts are also smooth and precise with hardly any false neutrals. After 100 kmph, the vibrations start to creep in significantly and the bike starts to lose its steam after 115 kmph. 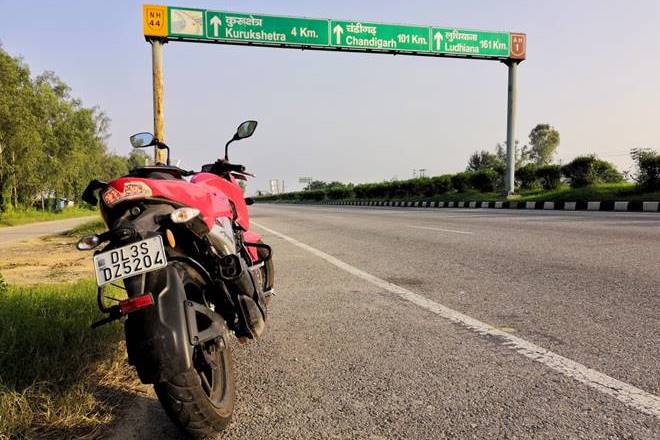 We achieved a top speed of 126 kmph on this bike which is a respectable number for a 160. The biggest highlight of this engine is that it feels eager and stress-free at the same time and hence, riding this bike is equal fun on the city and highways as well. In order to give you an idea, during our weekend getaway to Himachal, we had a Bajaj Dominar 400 with us that clearly had a displacement advantage over the RTR 160. Despite that, the bike didn’t let me feel embarrassed as it was keeping up with Bajaj, thanks to its juicy mid range and promising performance. 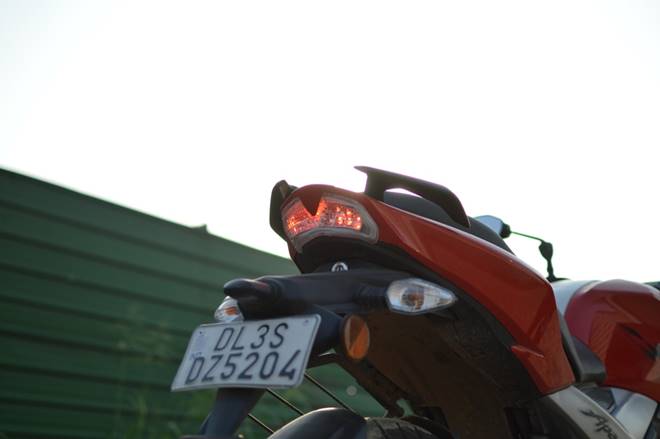 What all it packs in?

The TVS Apache RTR 160 4V is a feature-rich motorcycle. The bike gets a fully digital instrument cluster with multiple race inspired bits like 0 to 60 lap timer, top speed recorder and more. The console also houses twin trip meters, clock and the Fi variant comes with an additional gear position display. Furthermore, the bike gets LED DRLs (Daytime Running Lights) that looks majestic in the dark. The motorcycle gets racing decals on the fuel tank and the racing stripe along with pinstripe on the alloy wheels and the off set fuel tank lid further add to the sporty appeal. At the rear, you get split rear body grab rails that make for another visual highlight. 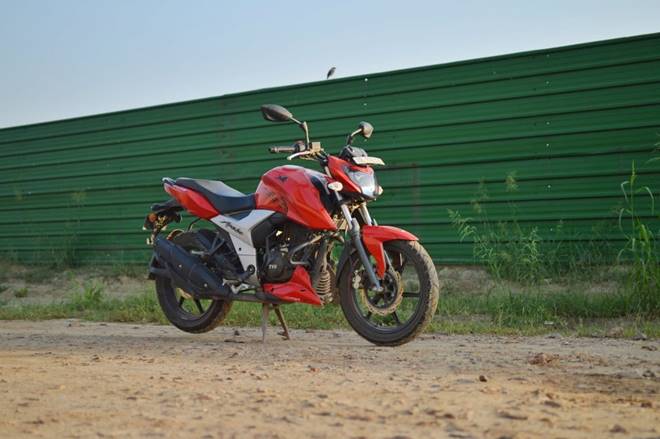 All said and done, the TVS Apache RTR 160 4V is a great city bike that you can take on long rides as well. The bike offers a fantastic engine performance, superb handling and ample comfort which is a rare combination in this segment. With prices currently starting at Rs 83,145 (ex-showroom, Delhi), the TVS Apache RTR 160 4V is on offer in three variants. The new 160 is a great option for those who are on the lookout for a sporty looking and entertaining motorcycle but at the same time have a budget constraint of close to Rs 1 lakh as the on-road price. More on the bike in our next and final report in which we will be concluding our overall journey with the motorcycle, giving the final verdict. 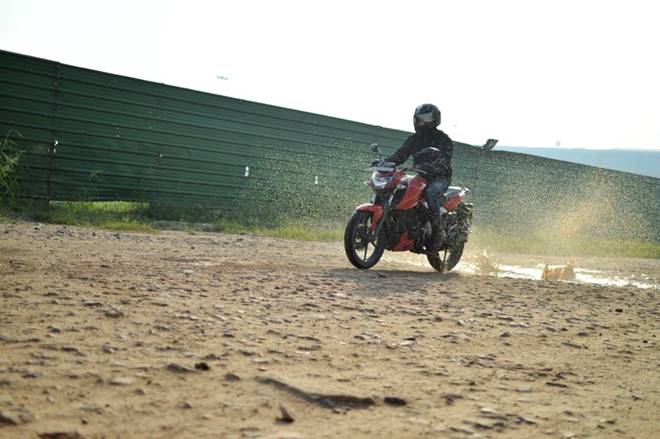 Issues during the usage

During my innings with the bike, there was a single issue that was rectified on the next service. The electric starter of the bike failed to work at times at the first attempt, however, prolonged and repeated pressing used to do the task at times. During service, folks at TVS informed us that the electric start switch was malfunctioning and they replaced it. What I really liked is the regular updates from the service center as I got multiple calls from them during the time the bike was getting serviced. These calls were to let me know what exactly has gone wrong, what time I can pick the bike and the final one to tell that the bike is ready for pick up.

Maintenance Costs: None (Electric start switch was worth Rs 400 but was replaced during warranty)