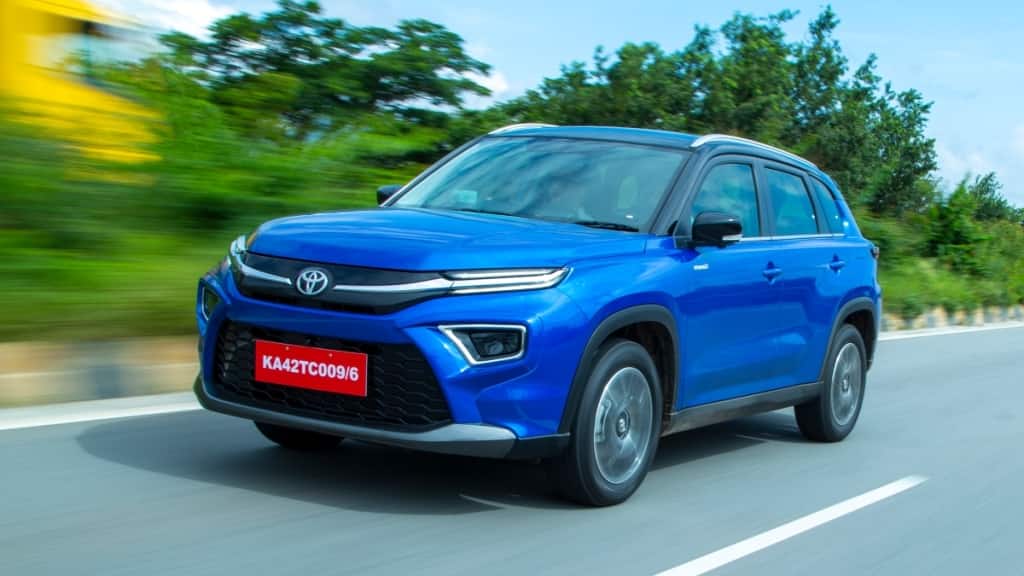 Toyota, the global leader in hybrid technology, has decided to make its presence felt in the highly competitive mid-size SUV segment. For the first time, this technology will be available in a mass market segment. Meet the all-new Toyota Urban Cruiser Hyryder. There was some confusion about whether the new SUV is a hybrid version of the sub-4 metre Urban Cruiser due to the similar name, but the Hyryder is one segment above its sibling and will rival the Hyundai Creta, Kia Seltos and the likes. Toyota is trying to establish the nameplate Urban Cruiser like the iconic Land Cruiser, which offers different types of SUVs under the brand like the Prado.

The ace in the pack is that due to the global partnership between Suzuki and Toyota, both companies will leverage each other’s strengths. Along with the hybrid tech, Toyota will manufacture both the Hyryder and upcoming Maruti Suzuki Grand Vitara at their Bidadi plant near Bengaluru. In return, the vehicles will be based on components from Maruti, who are masters in keeping everything cost-effective yet reliable. So will this be a result of what happens when an immovable meets an unstoppable force? We shall find out.

Toyota has gone with a split headlamp set-up which is seen in many new SUVs. With the LED DRLs splitting into two with a chrome strip in between and a faux carbon fibre front nose, the Hyryder showcases new styling elements that would be seen on upcoming electric vehicles. Moving to the lower part of the design and the massive air dam grille takes a majority of the real estate with the LED headlights on the two sides. This makes the vehicle come across as dynamic and bold, which will be appreciated by SUV buyers.

The Hyryder’s silhouette has a clean, uncluttered design with bulging square-shaped wheel arches. The dual-tone 17-inch alloy wheels add to the butch look, yet are understated. This is a good thing because the design of the Toyota SUV will age gracefully. On the other hand, the rear looks busy with twin C-shaped LED tail lights and a thick chrome strip running across the boot lid. Toyota has uniquely put together both the indicators and reverse lamps in the vertical cluster. To give it a brawny look the lower lip of both the front and rear bumpers get dark grey coloured faux skid plates.

Based on the new Maruti Suzuki Brezza’s global C platform, the Hyryder is 4,365mm in length, making it the longest SUV in its segment. It also boasts a commanding 210mm ground clearance, unladen though. The Hyryder will be available in seven monotone colours and four dual-tone colours.

Before we tell you about the space, seating and features the Hyryder offers, we would like to highlight how easy it is to enter and step out of the cabin. In the case of SUVs with their tall stance, passengers usually have to climb inside and crouch down before taking a seat. This is not the case with the Hyryder as its doors open wide providing plenty of space for passengers to get in and out of the vehicle effortlessly.

The hybrid SUV sports a dual-tone black and brown cabin with several different layers of materials on the dashboard. Toyota has used hard plastics on the top and the lower area while the centre panel gets a leather finish with metal inserts. The company has tried to keep the cost in check and the use of hard plastics makes it very evident.

The 9-inch infotainment system comes with wireless Android Auto and Apple CarPlay. The display is intuitive and easy to use. The top trim of the Hyryder comes packed with a six-speaker music system, head-up display, wireless phone charger, panoramic sunroof and front ventilated seats. It is also equipped with an all-digital 7-inch instrument cluster and steering mounted controls for the music system, Bluetooth, Cruise Control and voice command.

The front seats are well crafted and offer additional side support. The rear passengers are also well looked after as the seats are supportive and well cushioned. To increase the comfort level seat’s backrest reclines. When it comes to legroom, there’s plenty even for one over 6 feet in height but the same cannot be said about the headroom as it’s limited due to the panoramic roof.

As the Hyryder is a hybrid, it needs space to house the 1.8kWh lithium-ion battery in the boot space. Therefore, it has a compact space of 255 litres though Toyota has tried to be innovative by tucking in a small storage space underneath the trunk floor. The Hyryder does come with a full-size spare wheel, but like the Innova or the Fortuner is placed below the boot.

The Hyryder is powered by a 1.5-litre three-cylinder petrol engine, not to be mistaken for the mild hybrid powertrain from Maruti Suzuki, which is a four-cylinder one. The Hyryder’s engine has an output of 91bhp and 122Nm while the motor churns out 79bhp 141Nm making a total output of 114 bhp. The motor sends power to the wheels and simultaneously charges the battery.

Based on the throttle input and load, the eCVT selects which mode is ideal — EV, hybrid or petrol. The Hyryder can be driven in complete EV mode based on the driving conditions and offers three driving modes — Normal, Eco and Power. According to Toyota, the Hyryder can tackle up to 60 per cent of commute conditions in the cities in complete EV mode. The e-CVT also comes with B mode which increases the regenerative system by using the kinetic energy from braking and using it to charge the battery.

At low speeds, the engine is smooth and fairly silent for a three-cylinder. The vehicle has enough grunt to tackle the urban jungle, but if you step on gas then the engine increases pace in a measured and linear manner and not to forget the decibels become quite jarring to the ears. The Hyryder is happiest when it isn’t hurried or pushed around but when driven with gentle throttle inputs. It manages to stay in EV mode at 85-86 kmph.

It offers enough power for daily commutes and confidently cruises on the highway. This is the reason why it is one of the most fuel-efficient vehicles in its segment as it returns over 27.97 kmpl according to Toyota. During our drive covering both slow-moving traffic in the city and driving on the highway, the Hyryder returned 22 kmpl.

Comfort is what Hyryder is focused on and it achieves it with flying colours. The suspension’s damping set-up is spot on for our road conditions as it not only cushions ditches and potholes, but the vehicle does not ricochet off a speed breaker. This ensures that the rear passengers enjoy a stable ride and there’s no vertical movement. Even though the Hyryder isn’t supposed to be thrown around the corners, keeping its dimensions in mind, it remains stable and composed while negotiating turns.

Toyota Urban Cruiser Hyryder: Should you buy it?

The Hyryder is a very efficient vehicle, which could entice diesel SUV owners. The power output might not match its rivals, but it offers an effortless driving experience. The cabin is very spacious and comes with the latest features. It is equipped with six airbags, all disc brakes, a 360-degree camera, ABS with EBD, vehicle stability control, Hill Hold Control, Hill descendant and more. In terms of practicality, the Hydryder scores very high, but everything comes down to brass tacks and it will depend on how Toyota prices it.