‘Prana’ means a life-giving force and this new electric bike from the house of Srivaru Motors aims to induce some more life in the Indian electric two-wheeler segment. Has it managed to succeed in this?

The EV marathon in India is going on at quite a rapid pace and for this reason, the Indian electric two-wheeler segment is now not limited to just conventional, boring-looking scooters. An electric vehicle start-up in Coimbatore named Srivaru Motors has recently come up with an all-electric bike – Prana and the company has already delivered the first few units to the customers. Moreover, it has set up its first experience centre and looks aggressive in terms of pan India expansion plans. A few days back, we were in the beautiful city of Coimbatore to sample the newest electric streetfighter and it was certainly a different experience, to say the least. So, in this review, we are going to tell you how the SVM Prana is to ride, what all features it gets and more importantly, does it manage to impress us enough?

First things first! And we know what you are thinking! 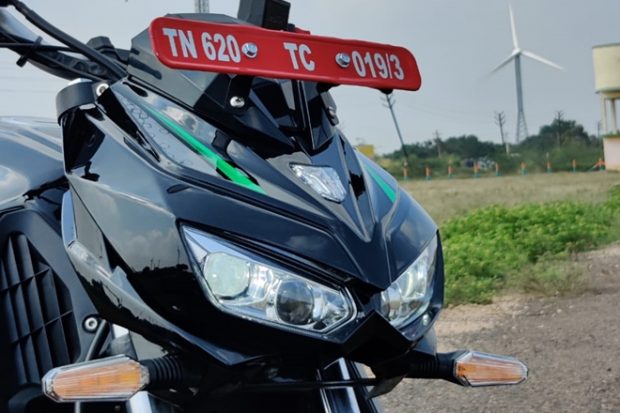 Now, before you even wonder why we aren’t saying it, the SVM Prana clearly takes its design inspiration heavily from a famed litre-class streetfighter. Can you name it? Do let us know! Now whether you take it as a copy of a Japanese bike or you see it as something that has its own identity, the SVM Prana is certainly one handsome-looking motorcycle. The front gets a really hunkered down, low-stance, thanks to which the Prana really looks like an aggressive street naked. Moreover, you get a powerful quad-LED projector headlamp set up that offers fantastic illumination in the dark and is good enough to confuse anyone from a distance that a big bike is approaching (the lack of exhaust note might spill the beans though). The turn indicators are LED too and so is the tail lamp. 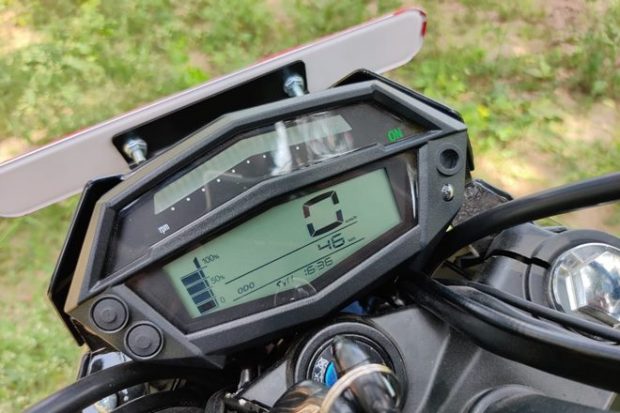 The instrument cluster on the SVM Prana is an all-digital unit, showing readouts for speed, remaining battery charge level, clock, odometer and it also has a trip meter. Moreover, there is an LED strip at the top that starts to light up towards the right depending on the speed and vice versa. Broadly speaking, the bike looks quite proportionate and we are sure that many people will buy it just because of the way it looks and of course, the EV benefits it has to offer. 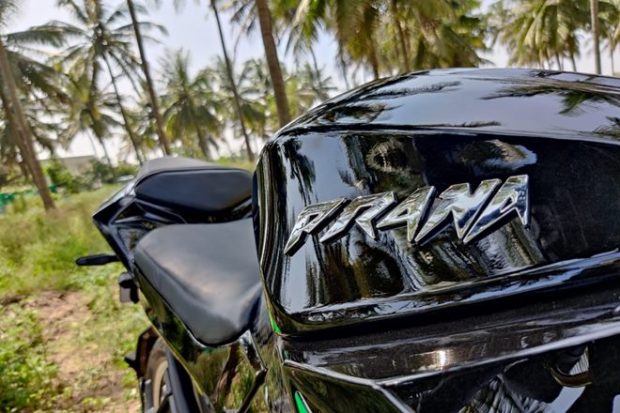 The ‘fuel tank’ on the bike looks muscular but since this is an all-electric bike, there is nothing inside it. That said, we think that the company could have used the said space smartly as something like a storage compartment. Srivaru Motors is also offering an optional fast charger with the bike but at the same time, isn’t recommending the same as it reduces the charging cycles of the battery. Now, that empty space of the fuel tank gets utilised in this case as the fast charger connects to the bike at the fuel tank lid with all the cables and wires placed inside. The battery on this vehicle can be charged through a regular 15A socket that is available in our homes and a 0 to 100 percent juice up takes around 4 hour 15 minutes.

Does it ride as energetically as it looks? 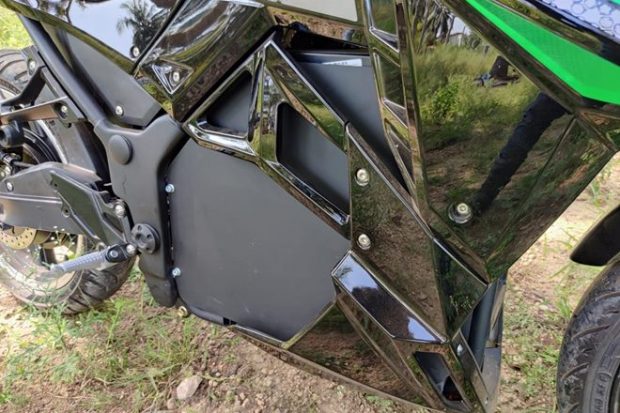 The SVM Prana electric bike comes with 5.36 hp BLDC hub-mounted electric motor paired to a 4.32 kWh lithium-ion battery. Needless to say, as this is an all-electric bike, all the torque is available right from the word GO and hence, you get crazy acceleration. The torque output to be precise is 38 Nm, which is more than a Bajaj Dominar 400 if you have to compare. The SVM Prana comes with four riding modes and you can toggle these with the help of a rotary selector on the left side of the handlebar. 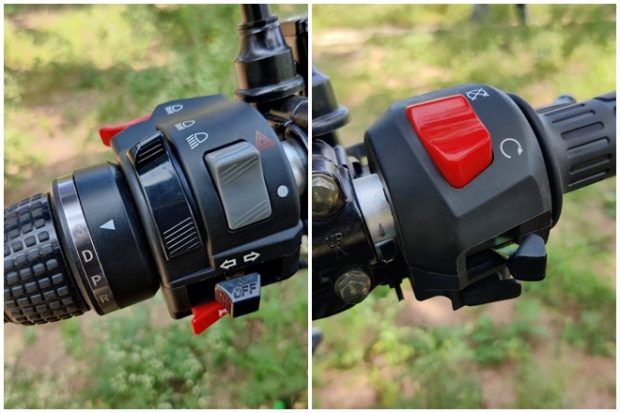 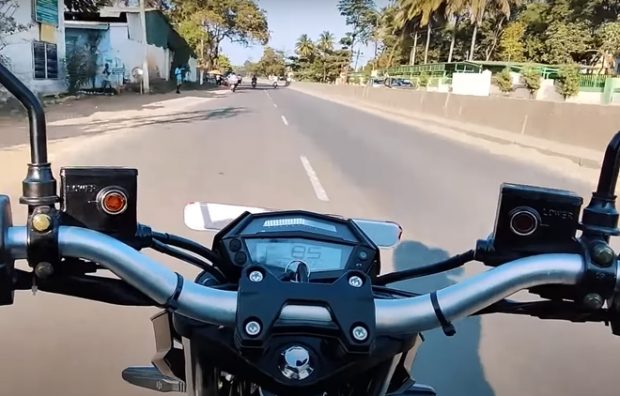 The surge and the pull as you twist the wrist in the Sports mode is so much strong that you will actually feel like you are on riding a middleweight bike. That said, this bike overtakes vehicles in the city just like a walk in the park but it is out on the highways and open roads are where you will enjoy the performance. In order to put things into perspective, the SVM Prana sprints from a standstill to 60 kmph in just 4 seconds that actually makes it quicker than the Revolt RV400 and even the KTM 125 Duke and Bajaj Pulsar 220F. The bike reaches speeds of 80-90 kmph effortlessly after which it takes some time to reach its top whack of around 120 kmph. Moreover, as no other electric bike currently on sale in India is offering a top speed of 123 kmph, this also makes the SVM Prana the fastest electric bike that you can buy in the country at this very moment! 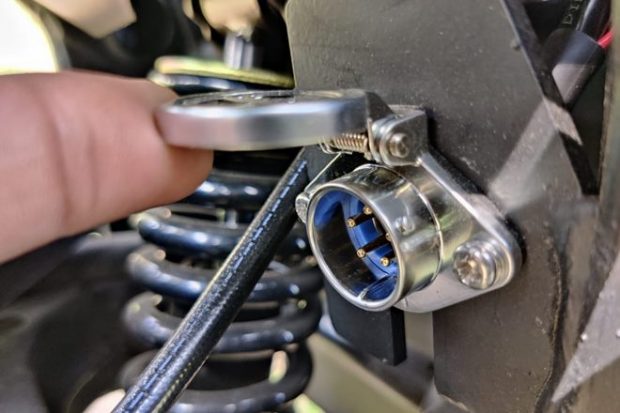 While the pick-up and acceleration of the SVM Prana is clearly better than some of the 150cc to 200cc ICE powered bikes, you can compare its cruising abilities with that of a Royal Enfield Meteor 350 that is happy doing 85-100 kmph all day long. The SVM Prana offers a claimed range of 126 km per single full charge. During our test run, the bike not only stayed true to its top speed claim but it fulfilled the range promise as well, as it covered 76 km with around 50 percent charge remaining.

Electric bikes aren’t dynamically sound, or is it? 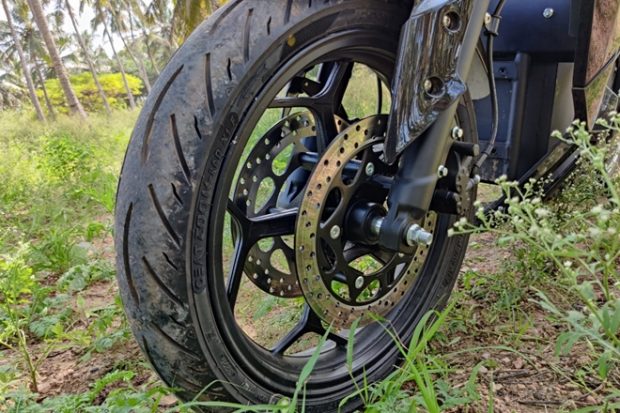 The SVM Prana gets conventional telescopic forks upfront along with a rear monoshock. The suspension set up is tuned on a slightly stiffer side and hence, while it doesn’t allow the impact of regular undulations to get transferred to the rider, the bigger potholes and speed breakers sure put you in slight discomfort. The straight-line stability is decent and the bike doesn’t deviate from its line even at triple-digit speeds. Also, while the Prana does handles around corners at high speeds quite positively, it isn’t as razor-sharp as a typical streetfighter. 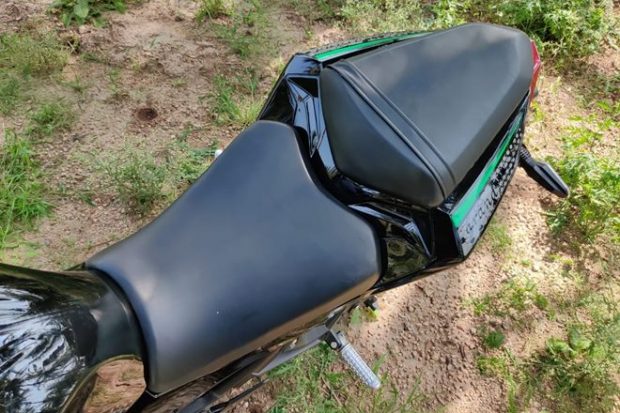 The grip from the tyres is decent too and these promise a decent adhesion with the surface even during wet conditions. The bike gets split step-up seats that look sporty and come with satisfactory cushioning. While the front seat is quite wide and comfortable, it is the pillion that will have to compromise a bit on comfort with the narrow seat design that has been done in the favour of aesthetic appeal. 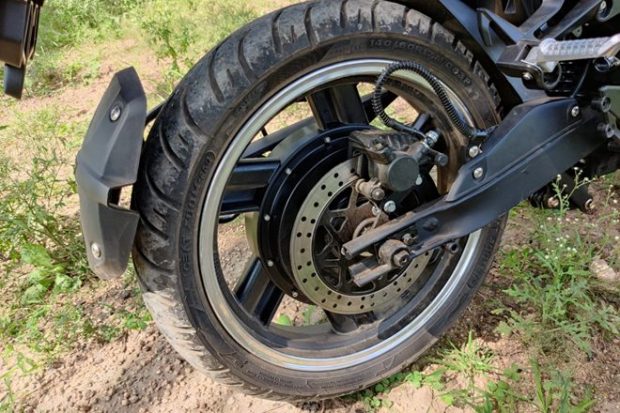 Speaking of braking performance, the bike gets 275mm dual disc brakes up upfront along with a single 240mm disc unit at the rear. Now, while one may assume a fantastic stopping power with the front dual disc set up, this essentially is not the case and that’s a good thing because the bike lacks an anti-lock braking system. What you do get instead is CBS which means just press the rear brake lever and both the front and rear brakes are applied automatically promising minimum chances of skidding. When you apply the rear brake lever, you get a fantastic stopping power and the bike sheds speed in haste whenever u want it to. 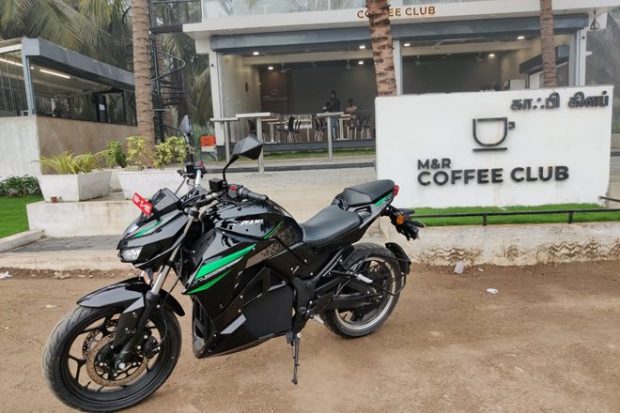 Now, while the SVM Prana overall seemed a promising electric bike, there are some minor niggles but these appeared only when I really started nitpicking. First, we felt that the side stand on the bike should be worked upon a bit as when you put it down, the bike stands really upright and there are times when you actually fear that the bike might fall on the opposite side. Another one is when you ride this bike at reasonably high speeds over broken surfaces, the body panels that are made up of fibre start to make kind of rattling noises.

And since there is no engine and all you hear is just the whining of the electric motor, that particular sound becomes more evident. Also, with the competition offering so many features and tech, we would have loved to see smartphone connectivity with this bike that would have certainly taken its value for money quotient higher.

How much you end up paying and should you buy it? 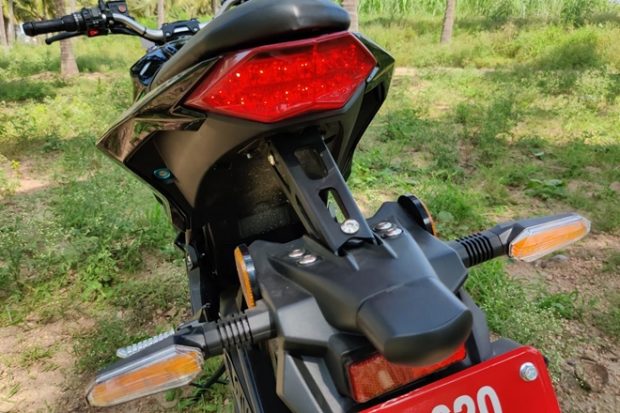 Srivaru Motors has come up with an interesting pricing strategy in the favour of a greener environment! The SVM Prana is currently priced in India at Rs 2.25 lakh but if you plant 10 saplings, click a picture of them and send to the company, it will refund you Rs 25,001 under the SVM Green Credit and this will bring down the cost of the motorcycle to Rs 1,99,999. The company currently has 14 dealerships in the southern part of India and has some aggressive plans to go pan India soon as within this year, it will be opening dealerships in Delhi-NCR and most of the major cities of the north followed by Tier-II and Tier-III cities. 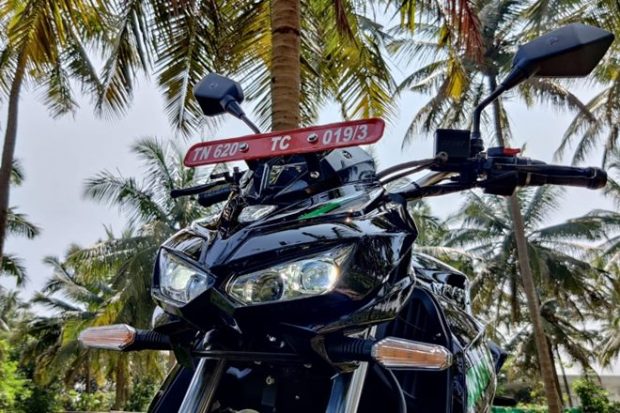 Even if you don’t have an SVM dealership in your city, you don’t need to be disappointed as you can connect with SVM Omnipresene team (that also takes care of Roadside Assistance) through any of the below-mentioned numbers. After you pay the booking amount of Rs 1,999, the bike will be delivered to your place. What all you get in this pricing is a gorgeous-looking motorcycle that can put 150cc and even 200cc bikes to shame when it comes to the overall performance. Keeping a few niggles aside, the SVM Prana is a great option at its pricing and it did manage to impress us with its performance and mannerisms and if you are someone who is comfortable putting the money it asks for, we don’t see any reason why you shouldn’t be placing your bets on this one. While the price may seem a bit on a higher side to some, the substantial amount of money that you will end up saving, in the long run, can never be promised by a conventional petrol bike.